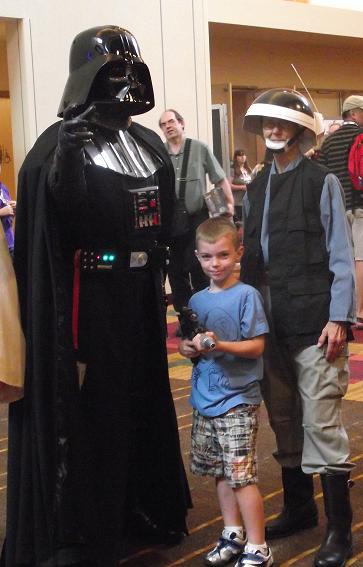 Speaking of dice-based games,  this was the first Gen Con go-round for game publishers The Haywire Group, which got its start with the game Dicecapades!, featuring over 100 different dice. The majority of their games are very dice-heavy. The two which captured my attention were their more educational games: 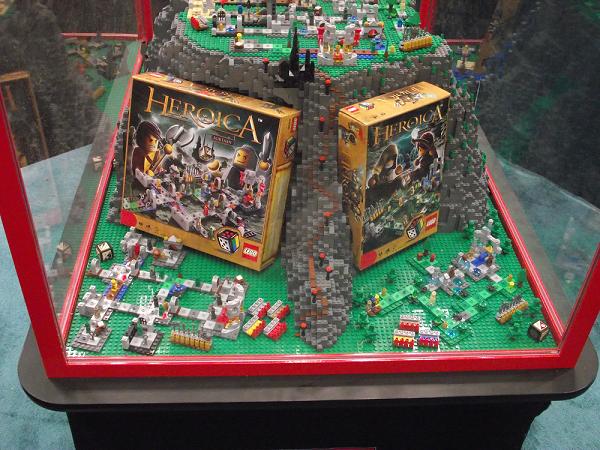 It’s been a long day, so I’m kind of exhausted and want sleep before tomorrow’s events, but I suppose before going to bed I should cover at least one fantasy-related products (for those who consider rampaging bears, word pirates, and number ninjas to be too mainstream). Let’s go with LEGO’s new Heroica game line.

If you’ve missed it over the last couple of years, LEGO has begun coming out with a dizzying array of board games with an intriguing LEGO spin – you build the board using LEGO components. As one expects, these usually result in somewhat versatile boards, although some (such as Pirate Plank, the one my son actually decided to purchase today) have a static board set-up that’s the same for each time you play.

Heroica is an attempt to create a traditional fantasy setting out of LEGOs. Given that LEGO has co-opted nearly every franchise around, from Harry Potter and Star Wars to Batman, it makes sense they’d make a foray into the high fantasy genre. Picture a LEGO version of the classic fantasy dungeon crawl, a la HeroQuest, and you’d end up with Heroica. In this world where monsters rule the land, a band of brave adventurers attempt to defeat the most powerful monsters.

The combat rules are very straightforward and my son – again, only 6 – had no problem adapting to the rules of the game. I have trained my young padawan well, it seems. (The rules of LEGO’s Ramses Return, however, were not followed so easily, but that was later in the day and I think exhaustion may have been a factor.) There are four games in the Heroica line, each which seem to have some different monsters and terrain elements. Here are the descriptions of the different games, taken directly off the LEGO website:

I believe the picture above shows Castle Fortaan (left) & Waldurk Forest (right). The version we played at the booth was Castle Fortaan, which was a lot of fun, and I can definitely see some cool ways that the games could be played together. Even just playing them sequentially, the prizes from one game could provide in-game benefits when playing the next game, turning it into a fun introduction to a roleplaying campaign for young gamers-in-training. 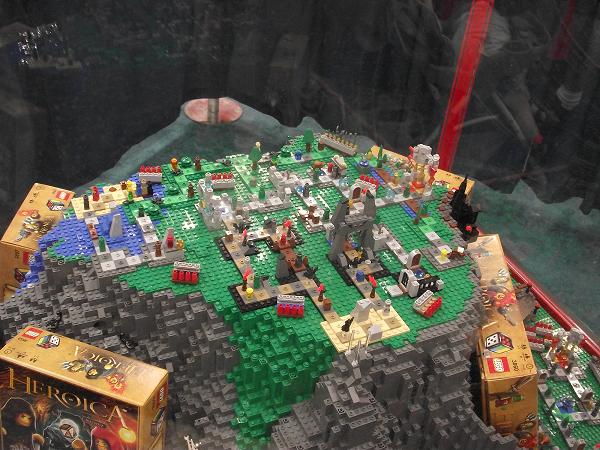 Or, of course, you could just merge all of them together and create a single uber-game board, as they had on display in this next picture. I haven’t delved into the rules to find out what gameplay elements are changed when you go this route, but I assume it’s described fairly clearly.

There were certainly many more kid-friendly games, but these were some of the ones that most captured my son’s attention, and which my wife and I thought we would actually want to play with him, so they’re among the best to pass along.

Tomorrow, my son will be left with grandma and it’ll be a full day of adult goodness with just my wife and me. (Not that kind of adult goodness. Really, get your mind out of the gutter.) Now that I’ve been through the Exhibitor’s Hall a couple of go-rounds, I have a good idea about the handful of games I’d like to zero in on for more detailed analysis, so expect to have the real cream of the crop coming up tomorrow.

Black Gate » Blog Archive » The Crafty Side of GenCon 2012

[…] booth, where they featured an assortment of their LEGO games, including the fantasy adventure game Heroica that I covered last […]