It’s that time of the year again, when all the good little gamers gather in Indianapolis to explores the exhibitor’s booths and discover treasures, new and old. I speak, of course, of Gen Con Indianapolis, the “Best Four Days in Gaming.”

If you recall from last year’s report (see Gen Con 2010 Reflections if you don’t recall), I had a lot of fun last year, mostly because I now have a family to take and with whom I could share the experience.

They also prove useful bait for dragons. (Just kidding. No infants were harmed in the making of this blog!)

Today, however, was all about me. I trekked into Indianapolis to experience the first day of the convention on my own, basically blasting through the Exhibit Hall and trying to look at every booth to find if there was anything interesting for me to report back on.

Let’s begin with the two big releases that I was primed for even before arriving at Gen Con, thanks to some targeted marketing (and promises of interviews):

Beyond that, the goal of my first day of Gen Con was to find some cool games. I swung by the booths of some old friends:

The first day is a blur, though I did get some fun review materials. Here’s a quick lowdown on what I’ve got so far to look over and share.

Paradigm Concepts has transformed their Arcanis game from a d20 system into a proprietary system, which you can test out with this free downloadable “fast play” book. One of the benefits of Arcanis is that you don’t start off as an inexperienced adventurer, but rather begin play as a seasoned warrior. No fighting sewer rates for five levels in this game! 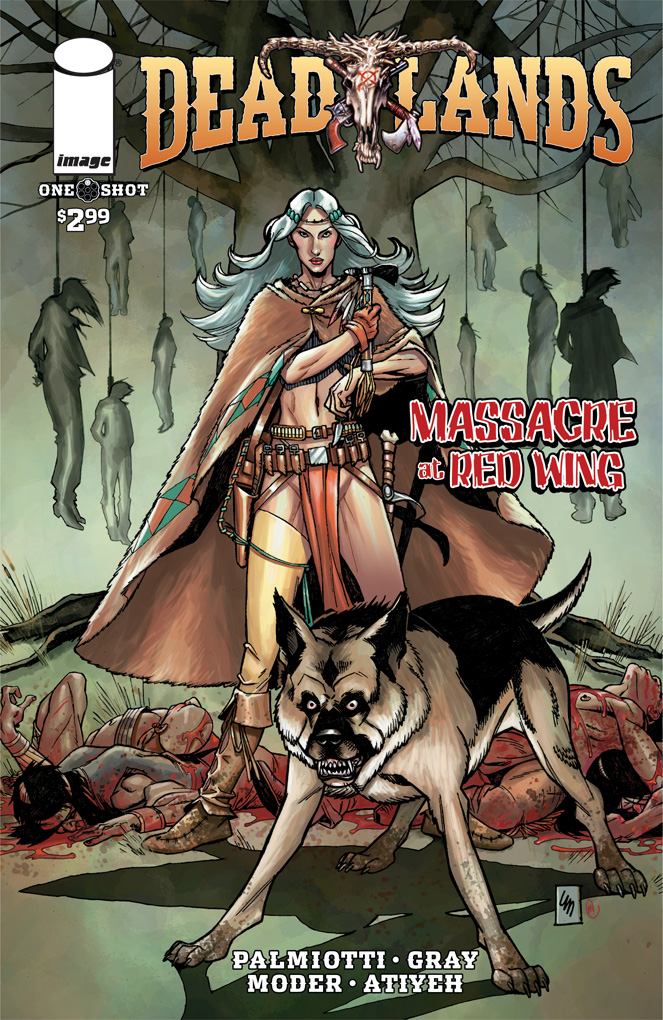 Visionary Comics has a new line of Deadlands one-shot comics coming out. For those who have never heard of Deadlands, it’s a classic “Weird West” roleplaying game, in which strange magical rocks discovered in the frontier have helped imbue people with magical powers … and also caused the dead to rise from the grave. My favorite element of the original game was that it used a deck of playing cards as part of the conflict resolution system, and there was also a class, Hucksters, which cast magic through playing cards in-game.

Deadlands has been transformed into a card game, board game, and probably a few other iterations. I’m not even sure if it’s still being published as an RPG by anyone these days, but the property is still valuable, since it combines elements of three popular genres: zombie horror, steampunk, and westerns.

Two of these one-shots are already out, with two more coming over the next couple of months. There’s probably still time to order copies (or pre-order the upcoming ones) from your local comic book store, if you can’t hunker down long enough to wait for me to review them.

Finally, let’s leave off our first day with … a free game! (Always a fun place to leave end things.)

War Mage Battlegrounds is a free online multiplayer fantasy game which is played through a web browser using Adobe Flash, so there’s no extra software that you need to download.  It has the feel of a tabletop, turn-based, miniature battle/strategy game transformed into an online game. The game even uses a hexagonal grid system for movement on the screen.

When playing the game, you select a race to play, from among the choices of Dragonkin, Dwarves, Sinta (Beastmen, perhaps – I didn’t actually play them, but the picture that shows up looks like a Lion-man), Giant, Human, Minotaur, or Elf. You get to choose 5 different unit types from each race. There are more than 100 units available in the game. You get them by either earning gold through playing repeatedly, or buy using real money to buy “coins,” which allow you to purchase the new units faster. (Hey, they’ve got to monetize somehow, after all.)

I played a demo of this game and found it to be fairly fun … especially considering the $0 price tag! It reminds me a bit of the game Hero Mages, which I discovered at Gen Con 2009, but the graphics on War Mage Battlegrounds are much more advanced, and the game draws you in a bit more, I think.

Anyway, that’s it for my first day at Gen Con 2010! Look for more fun and games (mostly games) tomorrow!

[…] of course, for sheer quantity of items on offer, nothing beats the legendary GenCon auction, held over multiple days in Indianapolis every […]