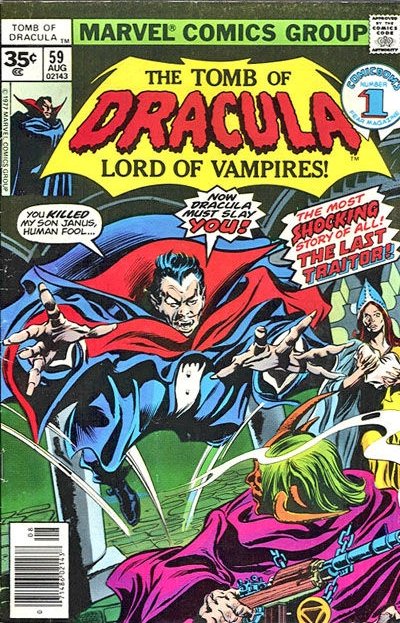 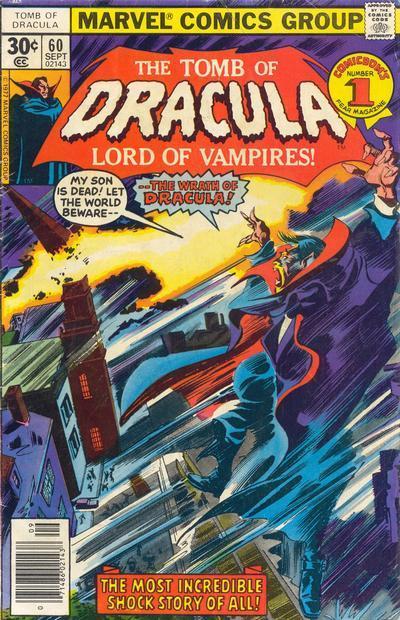 The Tomb of Dracula #59, “The Last Traitor” starts off with Quincy Harker, Frank Drake, Rachel Van Helsing, and Harold H. Harold feeling uneasy that Anton Lupeski has armed them with rifles and silver bullets as the group plots to assassinate Dracula at a feast in honor of his son’s birth to be held that weekend. Gene Colan’s depiction of Lupeski is eerily lifelike. The group is conflicted by their contempt for Lupeski and their desire to end Dracula’s reign of terror. Marv Wolfman gets in some nice digs about Freedom of Religion protecting Satanists as well as Christians with Lupeski saying that one day they will see whose God is stronger. We then switch to a brief domestic scene between Dracula and Domini as the vampire expresses his awareness that Lupeski seeks to undermine his power at the upcoming feast in his son’s honor. The vampire then sets out to hunt and picks as his victim an attractive night school teacher whom Dracula saves from an attempted rape by one of her students only to attack her himself. From there the action quickly shifts to the night of the feast in Janus’ honor. Lupeski, clad in his ceremonial mask and robes, proclaims the infant Janus the New Leader of the Dark Church just as Quincy, Rachel, Frank, and Harold burst in and the gunplay begins. Lupeski’s bloodlust gets the better of him and he brandishes a rifle as well and in the ensuing battle, Janus is inadvertently struck by a bullet and killed. Dracula is overcome with rage as he knocks Lupeski to the ground and crushes his face with his bare hands, killing the treacherous high priest. Domini turns in prayer to the portrait of Christ that hangs in the deconsecrated church and declares there are to be no more deaths. She orders Quincy, Rachel, Frank and Harold to depart quickly. She then informs Dracula that she acts on Christ’s commands and beseeches her husband to turn aside from his dark path and embrace her Savior. Dracula’s anger gives way to bewilderment as he transforms into a bat and flees from the church telling Domini he cannot do what she asks of him.

#60, “The Wrath of Dracula” is simply a stunning character study of an enraged lost soul in his darkest hour. Dracula drives Domini off and proceeds to destroy the deconsecrated church (with the exception of the painting of Christ that he is unable to touch). As his anger subsides, his grief turns to introspection as he recalls his cruelty to his first wife and his misogynistic behavior toward his female servants and finally his broken relationship with his daughter, Lilith. Overcome with emotion, he flies to the top of a building in downtown Boston in the midst of a terrible storm and declares that his entire life has been a lie that must finally end. Filled with all of the pain he and his family have endured, he swoops down to attack an attractive woman braving the rain far below only to check himself when confronted by her young son. Climbing atop a church tower in the heart of the storm, Dracula begs God to strike him down and end his suffering. When the lightning fails to kill him, he is once again enraged believing that God mocks him because he is already damned. Dracula vows to end God’s power over mankind and transforming into a bat, he flies off into the night. The issue ends with a brief epilogue showing Domini at Janus’ grave at dawn as she promises her son to find a means of resurrecting him. 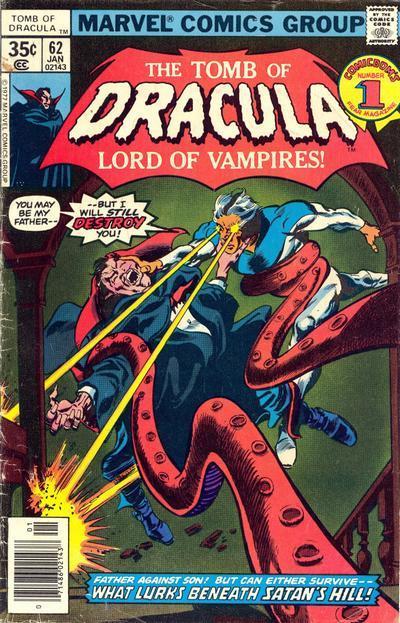 #61, “Resurrection” starts off with Dracula’s rage subsiding as he returns home to find his wife gone. Quincy, Rachel, Frank and Blade are plotting their next move against the vampire while Domini performs a Pagan ritual at Janus’ grave at midnight and succeeds in resurrecting their son. At their home, Dracula realizes what she is doing and is furious knowing all too well that if Janus is reborn, he will lose his innocence. There’s a moving interlude where Harold tenders his resignation to his publisher, sickened about having played a role in Janus’ death. Harold tells Aurora he is leaving for Europe and will send Frank and Rachel a postcard explaining why he cannot remain one of Quincy’s vampire hunters. Aurora, in a charming twist, asks Harold out, seeing the real him for the first time as the two characters make their departure from the series. Meanwhile, Dracula arrives at the cemetery in time to witness his resurrected son transform into the golden-skinned angel that Dracula fought several issues earlier. The adult Janus, in the form of the angel, declares to Domini that he has come to murder his father.

#62, “What Lurks Beneath Satan’s Hill?” opens with a tense family scene between Domini and Janus (or rather, Janus possessed by the unnamed angel) as her now adult son defies his mother and tells her that his father must be punished for his sins. Janus transforms into a golden eagle and flies off into the night. He finds Dracula feeding on a woman in the park. Father and son engage in a supernatural battle, shape-shifting at will without either gaining the advantage despite the ferocity of their conflict. The issue then takes a bizarre turn as a massive red tentacle is seen to capture Dracula’s victim as she makes good her escape. The tentacle is seen to crush the life from her body. We then segue to an ambulance carrying four female corpses that have been drained of blood and completely shaved. The drivers are understandably shaken by their grisly cargo, but their situation worsens when Dracula attacks them. The vampire watches in amazement as the four women rise from the dead and lead the vampire down the streets of Boston to a deserted mansion that rests atop Satan’s Hill. There the vampire discovers Topaz, Jack Russell’s psychic companion from Marvel’s Werewolf by Night series. Topaz has used her powers to summon Dracula to her aid as she is being held captive in the haunted mansion. An unseen force likewise lures both Frank Drake and Janus to the mansion as the eerie red tentacle is glimpsed flailing about in the dark in the final panel. 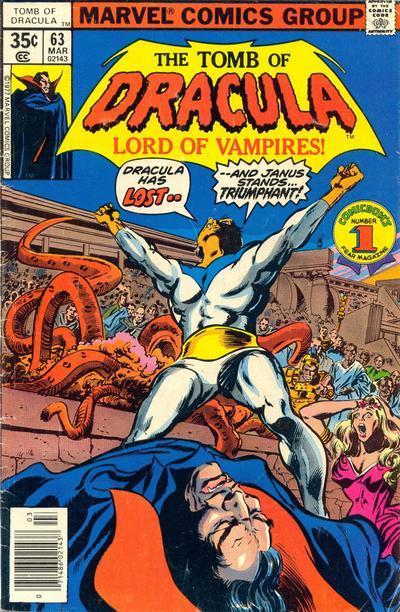 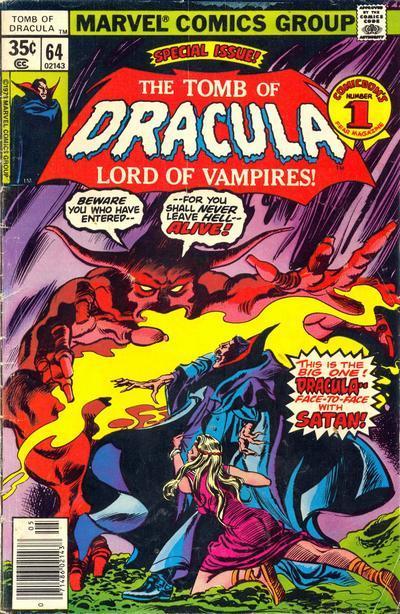 #63, “The Road to Hell” starts off with Topaz telling Dracula how she was abducted by a monstrous red tentacle that brought her to the mansion. She informs him that Satan’s Hill is literally the doorway to Hell. Janus and Frank meet inside the mansion, but Rachel (who has followed Frank to Satan’s Hill) finds the door will not open for her. Dracula, Topaz, Janus and Frank find themselves transported to a Roman arena where they are to fight in gladiatorial combat. The Lovecraftian monstrosity with the red tentacles sits in judgment over them. Dracula and Janus team up to fight the creature, but are overwhelmed by its supernatural powers. Janus turns on Dracula and appears to kill the vampire and then vanquishes the creature when the illusion ends and the reader sees Dracula alive seemingly destroying the creature himself. From there we cut to Rachel who is startled first by Domini’s arrival and second, by her ability to open the door that was locked to Rachel. Domini assures her that the door opened for her because she knows the house’s master. Inside, Janus urges Dracula to leave while he still can. Rachel and Domini enter the room and succeed in rescuing Frank. The three of them flee the mansion, but Dracula remains with Topaz who is unable to leave. The vampire enters a gate and he and Topaz find themselves in Hell facing the gargantuan form of a fire-belching red-skinned demon that declares itself to be Satan in the shocking cliffhanger ending.

#64, “Life After Undeath” gets underway with Dracula defiant in the awesome face of Satan. Topaz is to be destroyed because her psychic abilities are allegedly powerful enough to destroy the Father of Lies. Satan shows them a soul in hell, but then informs them that for all his power, he is nothing before the majesty of the God he despises. The vampire is struck down for his insolence and Topaz fears he has been destroyed completely. From there we switch scenes to Domini confronting Rachel, Quincy and Frank over their hypocrisy in carrying out God’s will while being consumed with hatred. Domini tells Rachel that she is as empty inside as Domini was before she met Dracula. While Quincy believes Domini is deluded, Rachel breaks down into tears recognizing the truth of what Domini has said about Rachel never knowing love her entire life. From there, the scene switches to New York where a powerful business man hires a good ol’ boy bounty hunter to avenge his daughter’s death by killing Dracula. Back in Hell, Satan informs Topaz that Dracula is not dead, but that he will suffer a fate worse than death. Satan tells her she must be destroyed for he fears her psychic abilities will help foster love in humanity and pure love is incorruptible and, therefore, fatal to Satan. Topaz unleashes all of her latent psychic power and Satan is seemingly banished. While Topaz’s fate is left open, Rachel finds Dracula before her on the streets of Boston and is about to shoot him with her crossbow when she realizes that he no longer has fangs and for the first time in over 500 years, Dracula is once again a man.

This nearly wraps up our look at Marvel’s original run of Tomb of Dracula. Writer Marv Wolfman frequently betrayed telltale signs of looming deadlines in minor changes to story direction or plot threads abandoned without resolution or explanation as an issue would take the series down a different path than the writer originally intended. These minor flaws aside, at his very best Wolfman teamed with the extraordinary artistry of Gene Colan delivered the finest Marvel title of the 1970’s. Wolfman forced readers to question the nature of good and evil and whether one could exist without the other. Most significantly, he perfectly encapsulated how faith in God and belief in the occult are both responses to human suffering beyond the limits of mortal reason. Nearly forty years later, it seems remarkable that Marvel had the courage to publish this material in the first place and even more remarkable that they continue to reprint Wolfman and Colan’s intelligent, thought-provoking stories in a world where repressive censorship is now viewed as political correctness.