GenCon isn’t called the biggest four days in gaming for nothing. As Howard Andrew Jones recently pointed out, it’s easy to go for several years and completely miss major tracks of programming (such as the fantastic Writers Symposium programs). One thing that’s easy to overlook amidst all the games are the great crafting booths… 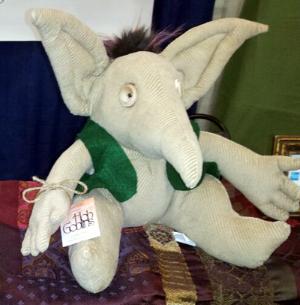 Black Gate has always been about finding the lesser-known sides of the fantasy world, and the Goblin Road line of products definitely fits the bill. They make dolls and masks, but let’s focus first on the dolls – such as this fun little guy shown to the right. These Hob Goblin toys are handcrafted in Ohio.

These things were just adorable and, as a gamer who has young gamers-to-be in the family, I thought they were awesome. The one flaw that I can see is that there isn’t a ton of diversity. There are three colors of vest, but all of the dolls had tan skin. I’d love to see some diversity in skin tone, as well as hair styles, and so on, to help mix it up a bit.

One fun little feature is that each Hob Goblin comes with a goblin adoption certificate, sort of like the ones that used to be included with Cabbage Patch Kids dolls, indicating that the goblin has been adopted by a kind human for their care and feeding.

In addition to the Hob Goblin dolls, Goblin Road produces molded leather masks of various styles, and some other accessories, such as horns. These were fairly impressive and reasonably priced as well, but aren’t currently listed on the website, though I’m told that the website will be updated to include these products in the relatively near future.

For the last few years, LEGO has had a fairly strong presence at GenCon. They used to have a massive inflatable LEGO pyramid that children could climb. Last year, the pyramid was gone, but they still had a fairly large booth, where they featured an assortment of their LEGO games, including the fantasy adventure game, Heroica, that I covered last year.

This year, though, LEGO itself doesn’t have a booth. It’s a serious disappointment, since my son loves LEGOs and I really enjoy using the LEGO games as a way of leveraging that to help get him involved in gaming.

Though LEGO itself is gone, there is a small craft booth based around the LEGO concept that drew our attention. The company, called Evil Robot, creates customized minifigs and accessories for use with LEGO and compatible building systems. The booth had tons of miniatures,  some of them official LEGO and other brands, ranging from Jack Sparrow and Harry Potter to Mario, Luigi, and Yoshi, but many others that were original custom creations. For example, they used a LEGO octopus and other parts to create a LEGO Cthulhu.

The company has a website over at mocblocks.com which features some of their LEGO accessories and a handful of minifigs (and a pretty friggin’ awesome custom Wall-E – er, I’m sorry, Waste Processing Robot – figure). So if you or someone you love is into a LEGO-compatible building system, definitely check it out for some cool accessories.

And then there was Tim Thurmond, the balloon sculptor, who spent his time working on a giant dragon balloon sculpture. The picture shown to the right shows the work in progress, but the wings still hadn’t been added at that point. I’ll try to get another picture of the completed dragon and post it tomorrow.

These weren’t the only crafters there, of course, but they were the ones that happened to catch my eye while I moved around the convention today. Do you know of any other crafters who were there that I missed? What’s your favorite sort of game-related artistic product?

Black Gate » Blog Archive » The Crafty Side of GenCon 2012 « straykatstrut