I read a lot of geeky books. And I don’t just mean science fiction and fantasy, I mean books that make even many normal geeks raise an eyebrow at my choices, such as books on game theory, economics and business, philosophy, and so on … things that have nary a laser rifle or robot or sword or sorcerer in sight. Right now, I’m reading Free: The Future of a Radical Price by Chris Anderson, editor in chief of Wired magazine. (An abridged audiobook version is available for free.)

It seems like when I read these books, the principles they espouse often show up all over the place, and that’s certainly happening at GenCon. In fact, the principles of “free” described by Anderson have always, in some form, been at the heart of every industry of sales. (Early on in the book, he explains how free cookbooks made the failing Jell-O company thrive.) And the gaming industry is no different.

For example, many roleplaying games have for years offered free little booklets that allow you to get started with a game, try it out in a limited way, and see if you enjoy it before you invest dollars and hours into playing it. But the problem is that these books were not actually free. There was a trade-off, because the publishers still had to actually print out the booklets and distribute them and so on. There was a cost to this, so it wasn’t just that they wanted to make money – if the gambit didn’t work, they were actually out money! Now, with the online world, PDF versions of books can be distributed (virtually) free of cost! That’s how Black Gate is able to offer reviews and commentary for free through these online blogs, for example.

Many of the gaming companies at GenCon have also embraced “free,” such as Hero Mages, an online board/strategy game that is completely free to play, but which allows players to pay a price to access certain premium characters and options (such as the ability to create and save your own map designs). (Anderson calls this business model a “freemium” model, where a portion of the users spend money for upgrades, which supports the site for everyone.) 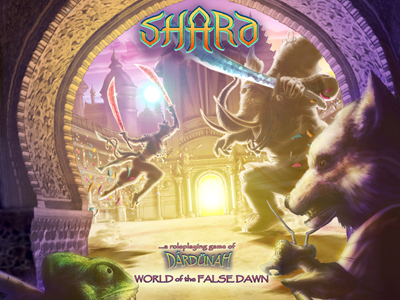 Another company that is brilliantly using “free” as a means of promotion is Shard Studios, who have created the Shard RPG. This game is based on the Hindu mythology of India and allows you to play a number of animal-based races. The setting doesn’t have any metal, but their weapons and equipment are built from gems of various types that can be used to power magical items, such as flying airships, or forged into weapons (such as the swords in the pictures above) with different properties. The books are beautiful and the setting is truly enthralling … it is one of a handful of games that I left GenCon knowing I would definitely want to try out by running a full game with.

How is Shard using “free”? Well, on their website, if you go to “The Game” link you can choose to download a “Welcome Booklet.” This booklet contains the entire game mechanics of the system, setting information, some introductory character templates, and so on. It is essentially the bulk of the main core rulebook … except for character creation, for which you need to buy the actual book. But, by checking out the Welcome Booklet, you can be sure that you really want the game before you shell out the money for the entire set of rules. And, if you just want to play the game and never create a character, I suppose you could even do that (although, as most gamers know, character creation is one of the most fun aspects of any game).

[…] first discovered the Shard RPG at GenCon in 2009. Despite being one of the most beautiful books I’ve ever seen, I was instantly enthralled by […]