I don’t know how many attendees are making it to GenCon this year, but the place is certainly packed. For example, here’s one of the game rooms. Not a dealer’s room, but just a room where people are playing board games. 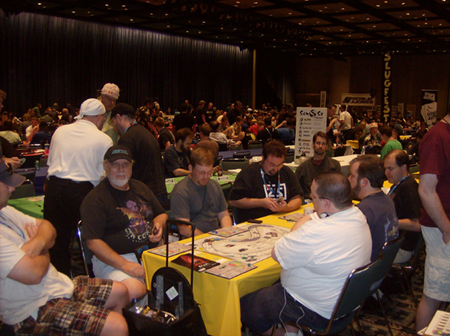 The rooms that house the miniature war games – WarMachine, Hordes, HeroClix, Dark Ages, and the like – are typically even larger than this one. They’re spread throughout the building, in rooms both large and small. And, of course, some of the attendees choose more elaborate clothing.

Now, back to the games. This time I’m just going to focus on one – Colonial Gothic from Rogue Games. This is a secret history setting that takes place during the early days of the American Revolution. Among all of the historical events of the American Revolution, there also exist monsters, demons, and witches prowling the colonies. Your character is aware of their presence and fights against these forces.

I’m enjoying these reports (and wishing I was at Gencon!).

I was glad to see you mention Colonial Gothic. It sounds like a terrific setting. Were there any new supplements announced at the con? Any idea if it’s growing in popularity?

There is a supplement, called Colonial Gothic: Secrets. I didn’t have much opportunity to peruse the volumes at GenCon, but I’ve written to the creator, Richard Iorio, to request some review copies. If they arrive, then Black Gate may have a full review written up in time for issue 14.