This certainly sounds interesting.  I wonder if the title “District 9” was in any way inspired by director Edward Wood’s “Plan 9 from Outer Space,” infamous for its bad acting, ridiculous script and amateurish special effects.  Apparently (I haven’t seen it yet), this new film is the opposite and perhaps a welcome relief from the standard cinematic science fiction films that rely more on special effects than effective storytelling. 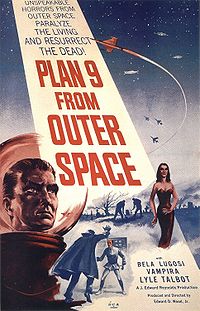 intriguing is another science fiction film, produced by Tim Burton, to be released on 9-09-09 called, well, you’ve already figured that out.

Were I only to pick one film to eagerly anticipate this year, 9 would be it. I love the short film it’s based on, and I enjoy pretty much everything Tim Burton is involved in.

District 9 is so far my favorite film of the year.

I too look forward to District 9. Name wise, and maybe tis is way off, but its a South African movie and South Africa had a well known place called District 6 in its past (during days of racial segregation)?

[…] what’s with this “nines” thing? In addition to those nines I’ve already mentioned, along comes The Law of Nines from Terry […]