George R.R. Martin’s A Song of Ice and Fire is the biggest series in fantasy right now — indeed, the biggest literary series of any kind — but I’ve never read it. I prefer not diving into a series until it’s complete (or at least very close to complete), and based on the news that it probably won’t wrap up until after 2020, I’m likely years away from working up enough motivation to pick up the first volume in the series, A Game of Thrones.

But there are other Martin books I’m very interested in. For instance, I just bought a copy of his steamboat vampire novel Fevre Dream, originally released in 1982. It’s one of the most acclaimed horror novels of the last 30 years and, even better, it’s a standalone novel. I don’t have to wait for the sequel, which is kind of refreshing.

Fevre Dream has an interesting publishing history. It was Martin’s third novel, after Dying of the Light (1977) and Windhaven (1981, written with Lisa Tuttle), and his first horror novel. The early 80s was the era of the blockbuster horror novel, led by the huge success of Stephen King’s The Stand (1978) and Firestarter (1980), and Peter Straub’s Ghost Story (1979). It seemed that every young genre writer capable of delivering a high-concept horror novel was being urged to do so by their agent, and Martin was no exception.

The hardcover edition of Fevre Dream was published by Poseidon Press in 1982 (above left, cover by Barron Storey), and it was nominated for both the World Fantasy Award and the Locus Award for Best Fantasy Novel. Its success led Martin, who until that point was known chiefly as a science fiction writer, to attempt a transition to horror with his fourth novel, The Armageddon Rag (1983), an ambitious and experimental novel about the supernatural events surrounding the reunion tour of the band The Nazgûl.

Fevre Dream, however, has fared significantly better. It has been reprinted multiple times since it first appeared over 30 years ago. It was selected as #13 in the Gollancz Fantasy Masterworks series in 2002 (above middle, cover by Paul Wright), and it has been in print in paperback, off and on, for much of the last three decades. Since 2012 it has been in print in a Bantam mass market edition with a new cover by Stephen Youll (above right).

Here’s the book blurb for the Bantam edition:

Abner Marsh, a struggling riverboat captain, suspects that something’s amiss when he is approached by a wealthy aristocrat with a lucrative offer. The hauntingly pale, steely-eyed Joshua York doesn’t care that the icy winter of 1857 has wiped out all but one of Marsh’s dilapidated fleet; nor does he care that he won’t earn back his investment in a decade. York’s reasons for traversing the powerful Mississippi are to be none of Marsh’s concern — no matter how bizarre, arbitrary, or capricious York’s actions may prove. Not until the maiden voyage of Fevre Dream does Marsh realize that he has joined a mission both more sinister, and perhaps more noble, than his most fantastic nightmare — and humankind’s most impossible dream.

The Bantam paperback is the version I bought last week.

For collectors, there are a few other editions of interest. I have a copy of the 1983 Pocket Books paperback (above left), which I’m quite fond of… like a lot of paperback bestsellers in the 80s, it had a fold-open cover that revealed the unspoiled cover art underneath. The submerged vampiric face is much more visible in this version than it is in the hardcover: 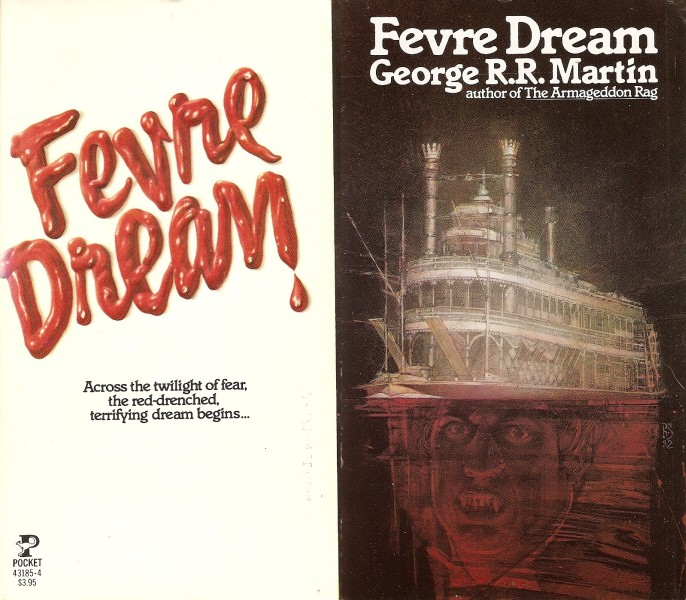 There was also a trade paperback edition from Bantam Spectra, with cover art by Alain Daussin Johner (above right). That version is also in print.

Fevre Dream was published in October 1982 by Poseidon Press, and reprinted in May 2012 by Bantam Books. It is 461 pages, priced at $7.99 in paperback and $6.99 for the digital edition. The cover is by Stephen Youll.

The funny thing about Armageddon Rag, is that I think it’s the best thing he’s ever written. A Song of Ice and Fire is okay, but it’s essentially the War of the Roses with Dragons and Cimmerians thrown in. The Armageddon Rag, on the other hand, was an attempt to make sense of the counter culture of the 1960’s from the 1980’s using fantasy. It’s brilliant, and I’ve read it once a years for over a decade now.

Glad to hear that, Daran. It makes you wonder how things could have been different if THE ARMAGEDDON RAG had connected with an audience, instead of A GAME OF THRONES. Martin would have had a very different career.

THE ARMAGEDDON RAG would not have been considered a failure if expectations for it had not been so very, very high. It’s still highly regarded by most in the field… but it never found anything like a significant audience.

I read this book maybe 20 years ago and I totally had forgotten it was written by GRRM.
I loved the book and thought it was not only a great vampire book, but a nice little historical romp.

Fevre Dream is mostly excellent. Wonderful characterization that is a hallmark of Martin’s. While not a lost book, it feels like a key lost vampire novel – I rarely see it mentioned in discussions of important horror works of the 80s – and I think it’s much better than Rice’s works. It sort of loses steam (no pun on the novel’s use of a steamship intended) near the end, but it was memorable, and memorably moody, atmospheric, and dark. Well worth a read.

FEVRE DREAM is a wonderful book, my favorite thing by Martin.

But Gawd that Bantam cover is awful, and very much misrepresents the novel (which is not what I would call true Horror).

As for ARMAGGEDON RAG, I hear good things about it, but I tend to be allergic to Rock music stories. It’s not that I don’t like Rock music, it’s just the stories about it (especially those that go on and on about how Important it was, etc. etc.) rub me the wrong way.

> I loved the book and thought it was not only a great vampire book, but a nice little historical romp.

Glad to hear that, Tim. You know, I hadn’t realized that it was a historical until I sat down to write it up this week… for some reason, I’d always thought it was a contemporary novel!

> While not a lost book, it feels like a key lost vampire novel – I rarely see it mentioned in discussions of important
> horror works of the 80s – and I think it’s much better than Rice’s works.

I can’t comment directly on the novel because I haven’t finished it yet, but solely based on the acclaim I’ve heard from those who’ve read it, I agree with you… it seems like a sorely neglected horror classic. Hopefully Martin’s recent fame will help rectify that.

> As for ARMAGGEDON RAG, I hear good things about it, but I tend to be allergic to Rock music stories. It’s not that I don’t like
> Rock music, it’s just the stories about it (especially those that go on and on about how Important it was, etc. etc.) rub me the wrong way.

Yeah. I know what you mean. I’ve encountered my share of rock-music-saved-a-generation stories too, and they tend to be a little too heavy-handed to be enjoyable.

Have you seen ALMOST FAMOUS? That’s my favorite rock-music-saved-a-generation story. Understated and very personal, and I think that’s what made it work. Well, that and the fact that Cameron Crowe was able to bring such authenticity to the tale.

How about Harlan Ellison’s rock and roll novel Spider Kiss, about a Jerry Lee Lewis type singer? It’s one of the best things the Angry Young Man ever wrote.

I’ve never read any of Ellison’s novels. In fact, I haven’t read much of his short fiction in the past 20 years. His personality as a belligerent crank has supplanted his rep as a writer in my mind, and I don’t tend to think of him primarily as a fantasy writer any more.

I have seen ALMOST FAMOUS, and I liked it a lot … the personal nature of the story is, as you say, a key. (Crowe’s authenticity was, of course, authentic.)

Haven’t read SPIDER KISS, or, indeed, any Ellison novel. His short fiction from about 1965-1975 was really good (though I might gingerly suggest that not all of it has aged well — I was surprised at how much of a letdown it was to reread “Repent Harlequin …” a few years back) … his later work remains skilled and often interesting but less intense (not always a bad thing … at his worst Ellison’s intensity seemed forced on the page — at his best, of course, it burned through the page) …

It has to be said that that’s hardly an unusual career arc for a writer. The main unusual thing about Ellison was that after a couple of early novels, some decent (as SPIDER KISS is, by repute) and some awful (there is one that Ellison will supposedly buy from you and destroy if you bring it to an autograph session), he concentrated almost solely on short fiction (well, and TV work, and criticism. etc.).

Indeed, his TV and movie criticism is very interesting even when you disagree, and great fun to read.

I thought the early novel he was notorious for destroying was DOOMSMAN (1967), pic here: 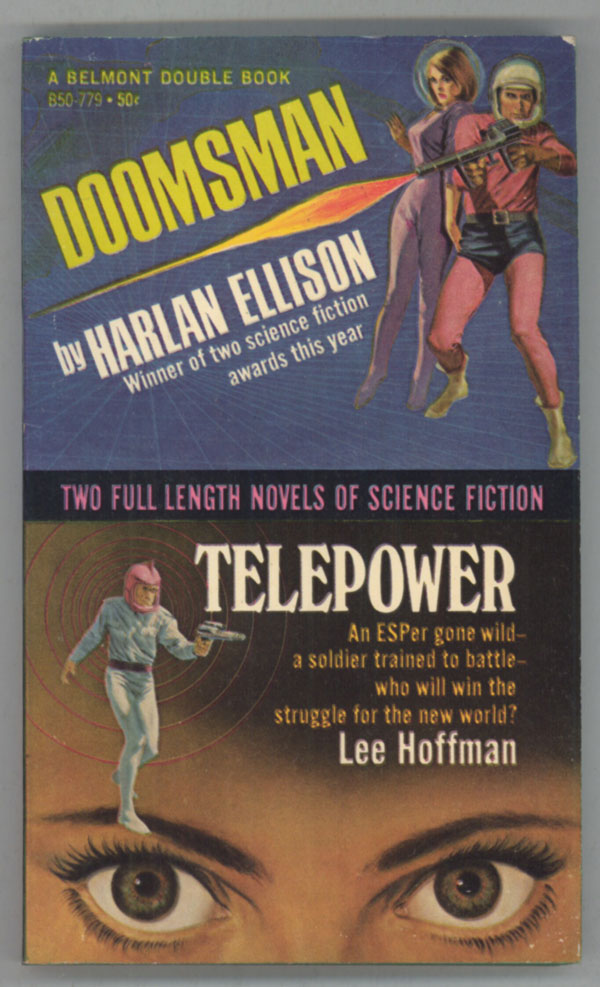 There were all kinds of stories about Ellison ripping this one up every time he found it in a Dealer’s Room in the 70s and 80s.

Oddly enough, Wikipedia says the book was re-issued under Ellison’s preferred title WAY OF AN ASSASSIN in his 2012 collection Rough Beasts, so he couldn’t have hated it that much…

Spider Kiss isn’t fantasy, except that Ellison’s usual hyperbole and hyper-intensity keep it from feeling like any kind of realism. In form it’s a classic tale of the rise-and-fall of a flawed man, his meteoric, hubristic ascendance and his well-deserved and self-inflicted collapse. It’s early Ellison (1961) and quite good.