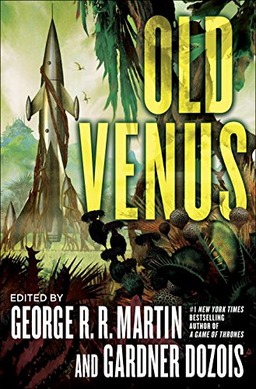 One of my favorite anthologies of last year was Old Mars, a pulp-inspired tribute to “the Golden Age of Science Fiction, an era filled with tales of interplanetary colonization and derring-do,” edited by Gardner Dozois and George R.R. Martin. When I blogged about it last January, Gardner sent me this tantalizing message about their next project:

Glad you enjoyed it… If you liked this one, keep an eye out for Old Venus from the same publisher; same kind of thing, although I think it’s even stronger than Old Mars. Pub date is sometime in 2015.

Well, that sounded promising. A year later, a lot more detail has emerged about Old Venus, including the complete table of contents and the following book description:

From pulp adventures such as Edgar Rice Burroughs’s Carson of Venus to classic short stories such as Ray Bradbury’s “The Long Rain” to visionary novels such as C. S. Lewis’s Perelandra, the planet Venus has loomed almost as large in the imaginations of science fiction writers as Earth’s next-nearest neighbor, Mars. But while the Red Planet conjured up in Golden Age science fiction stories was a place of vast deserts and ruined cities, bright blue Venus was its polar opposite: a steamy, swampy jungle world with strange creatures lurking amidst the dripping vegetation. Alas, just as the last century’s space probes exploded our dreams of Mars, so, too, did they shatter our romantic visions of Venus, revealing, instead of a lush paradise, a hellish world inimical to all life.

But don’t despair! This new anthology of sixteen original stories by some of science fiction’s best writers — edited by #1 New York Times bestselling author George R. R. Martin and award-winning editor Gardner Dozois — turns back the clock to that more innocent time, before the hard-won knowledge of science vanquished the infinite possibilities of the imagination.

Join our cast of award-winning contributors — including Elizabeth Bear, David Brin, Joe Haldeman, Gwyneth Jones, Mike Resnick, Eleanor Arnason, Allen M. Steele, and more — as we travel back in time to a planet that never was but should have been: a young, rain-drenched world of fabulous monsters and seductive mysteries.

Old Venus is comprised of sixteen stories all set on the old watery pulp retro Venus of the sixties, with its swamps, dinosaurs, and web-footed Venusians.

The final lineup for this one will look like this:

INTRODUCTION, by Gardner Dozois
FROGHEADS, by Allen M. Steele
THE DROWNED CELESTRIAL, by Lavie Tidhar
PLANET OF FEAR, by Paul McAuley
GREEVES AND THE EVENING STAR, by Matthew Hughes
A PLANET CALLED DESIRE, by Gwyneth Jones
LIVING HELL, by Joe Haldeman
BONES OF AIR, BONES OF STONE, by Stephen Leigh
RUINS, by Eleanor Arnason
THE TUMBLEDOWNS OF CLEOPATRA ABYSEE, by David Brin
BY FROGSLED AND LIZARDBACK TO OUTCAST VENUSIAN LEPERS, by Garth Nix
THE SUNSET OF TIME, by Michael Cassutt
PALE BLUE MEMORIES, by Tobias S. Buckell
THE HEART’S FILTHY LESSON, by Elizabeth Bear
THE WIZARD OF THE TREES, by Joe R. Lansdale
THE GODSTONE OF VENUS, by Mike Resnick
BOTANICA VENERIS: THIRTEEN PAPERCUTS BY IDA COUNTESS RATHANGAN, by Ian McDonald

I don’t think there’s a book I’m looking forward to with more anticipation than this one.

My story’s a bit of a departure from my usual stuff. I’ve always loved P.G. Wodehouse’s Jeeves and Bertie stories. So I’ve sent them off to the swamps of Venus (names changed, of course).

I read Old Mars and the first story sample had me hooked. It was Martian Blood by Allen Steele. It was about a scientist who researched Martian DNA and found some interesting things about common ancestry. It was a fantastic story and the stories that followed were equally as good. I’d give it two bananas, two circles, and a snap (In Living Color reference). I’ll buy Old Venus as the editor has a good weather eye for good stories and I’m sure this one will match up.

[…] The thing that fascinates me most about Radiance is the marvelously gonzo setting — it’s the kind of thing that makes us old-school pulp fans weak in the knees. There’s been something of a resurgence of interest in classic planetary space opera in the last few years. Just look at Gardner Dozois and George R.R. Martin’s retro-pulp style anthologies Old Mars and Old Venus. […]