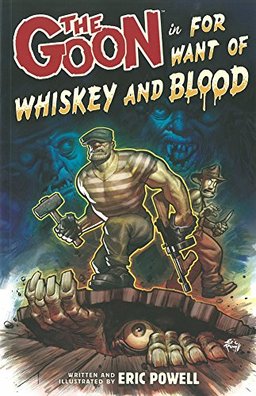 Eric Powell’s The Goon is one of the most original — not to mention funniest — comics on the market.

When I was still visiting comic shops regularly it was always on my pull list, right alongside Courtney Crumrin and Atomic Robo. The Goon is the story of a none-too-swift hired muscle man (named only “the Goon”) who’s left high and dry when the gangster he works for dies suddenly. With nothing left to lose, the Goon simply continues the racket set up by his boss, collecting protection money from local businesses in a small American city.

When a zombie invasion threatens the inhabitants, the Goon does what he does best… provide protection. Soon most of the city falls into chaos, with the exception of those few square blocks under the Goon’s protection. The constant scheming of the Zombie Priest and his various minions to get rid of the Goon and seize total control of the town provides most of the drama (and the comedy). The art is top-notch, and Powell has shown a real talent for surprisingly touching storylines.

Truth to tell, I had stopped buying The Goon trade paperbacks, because I had heard the issues were being collected in deluxe hardcover Library Editions. Not sure what happened to those plans, so now I’m back to catching up with the regularly issued trade collections. For Want of Whiskey and Blood is the 13th volume, and it collects issues #42 — #45 of the ongoing comic.

The return of the Zombie Priest, a Latin-tongued Godzilla, drunk sailors, and a Halloween visit from Billy the Kid are just a few of the special tricks and treats for Goon and company in this new collection from Eric Powell, which Comic Book Resources calls, “the product of a contentedly demented mind.”

I only started binge reading The Goon this year. It is an amazing comic.

Glad you mentioned Atomic Robo, too. That, by far, is my favorite.

BTW – did you see that Atomic Robo is now a webcomic? They’ve left Red 5. From now on it will be a free webcomic with merchandise that will include collected trades.

They just yesterday uploaded Vol 1 to the site. Other volumes will follow, and then volume 10 will launch on the website.

What? I hadn’t heard that. That explains why I haven’t seen an issue in a while.

I’ll have to alert my son Tim – he loves both ATOMIC ROBO and web comics.

I hope the trades still come our regularly…

I love The Goon, and I’m obviously well behind on trades as I think I might only have 9 or 10 or so. I have some catching up to do.

You and me both, Chris! I think I’m missing 3-4 volumes in there somewhere.