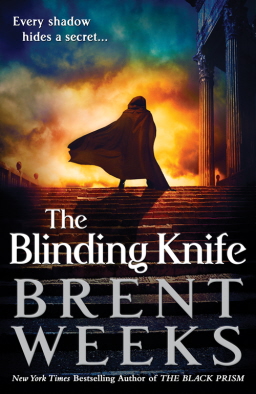 Brent Weeks’s The Blinding Knife, the second volume of The Lightbringer Saga, has won the David Gemmell Legend Award for Best Fantasy Novel of 2012.

The David Gemmell Legend Award is a fan-voted award administered by the DGLA. This is the fifth year for the Legend Award; it was first granted in 2009 to Andrzej Sapkowski’s Blood of Elves; in 2010 to Graham McNeill’s Empire: The Legend of Sigmar, in 2011 the winner was Brandon Sanderson’s The Way of Kings, and last year The Wise Man’s Fear by Patrick Rothfuss received the honors.

The nominees for the 2013 award also included The Red Country by Joe Abercrombie, Stormdancer by Jay Kristoff, King of Thorns by Mark Lawrence, and The Gathering of the Lost by Helen Lowe.

The Morningstar Award for Best Fantasy Debut was awarded to Malice by John Gwynne.

The Ravensheart Award for best Fantasy Book Jacket Artist went to Didier Graffet & Dave Senior for the cover of The Red Country by Joe Abercrombie.

Our man-on-the-scene, roving reporter Harold M. Page, will report in with complete details on the ceremonies right here on Thursday.