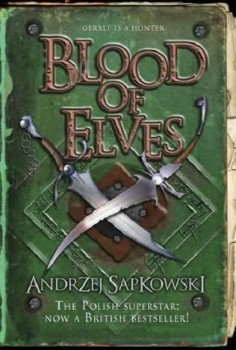 My first thought upon hearing that Andrzej Sapkowski had won the inaugural David Gemmell Legend Award (which happens to be the award most suited to home-defense — just try to scare off a burglar with a Hugo rocket) was “great, there goes that post I planned examining if Abercrombie’s work really fits the spirit of David Gemmell’s fiction.” My second thought, of course, was “just who exactly is Andrzej Sapkowski?”

In his native Poland, people don’t have to ask that question because there Sapkowki is a Really Big Deal, author of a fantasy series that outsells the works of Stephen King (all the press releases love to use that datum — but for all I know Poles don’t like Stephen King). In the Anglophone world, Sapkowski’s work is just now being offered in translation, but his world is probably most widely known as the subject of a computer role playing game which saw world-wide release (The Witcher).

So, the results of the Gemmell Award surprised me. When I had heard that the award was going to be based on a straight vote, I had reservations, but I never foresaw anything like this, with the award going to an author little known in English-speaking circles. Personally, I think you couldn’t ask for a better result. Not only is the award boosting the profile of a “new” author, it’s doing a service to heroic fantasy fiction in general by presenting it as an open and international phenomenon. Few awards in the literary world posses that potential for surprise and discovery.

Sapkowski’s Gemmell-winning novel, Blood of Elves, is now available in English and I’ve even spotted it at a few book stores. Might be the perfect time to check him out.
__________
BILL WARD is a genre writer, editor, and blogger wanted across the Outer Colonies for crimes against the written word. His fiction has appeared in numerous magazines and anthologies, as well as gaming supplements and websites. He is a Contributing Editor and reviewer for Black Gate Magazine, and 423rd in line for the throne of Lost Lemuria. Read more at BILL’s blog, DEEP DOWN GENRE HOUND.

[…] for a few weeks — I’ve posted a little news item about the first-ever winner of the David Gemmell Legend Award (which I also talked about on this blog), Andrezej Sapkowski. Yes, I had never heard of him either, […]

Great post with some trenchant points.
At first I was also a wee bit skeptical about Sapkowski taking this award. What about Abercrombie (an author just as good as the hype would lead you to believe)? Or Richard Morgan’s stunning The Steel Remains?
Well, there’s something to be said for suddenly having an esteemed author of heroic fantasy called to my attention. I didn’t kow Sapkowski at all. And now I’m going to read his book because it won this award.
This doesn’t happen with any regularity for any award in any genre. That it would happen in heroic fantasy is a fine and promising thing.

Agreed, John. The simple fact his book won a Snaga is enough to get him read by me. Perhaps more of the reason is because I want to know if the DGLA is legit or not, but the book must still have something to interest me.

The fact I only even became aware of Sapkowski due to the DGLA Long List is pretty cool, I think.

Nice article, Bill…though including a review of the title would have been a sweet bonus 🙂

But why include a review when that could be another blog post? 😉

By the way — the snaga in the picture above is the scaled-down, runner-up award. I couldn’t find an uploadable pic of the first place award, which is bigger and has an engraved blade.

[…] while back I talked about The David Gemmell Legend Award, given this year for the first time to a fan favorite novel of heroic fantasy. Like most fans of adventure-oriented secondary world fantasy, I was used to […]

[…] DGLA. The Legend Award for Best Fantasy Novel was first granted in 2009, to Andrzej Sapkowski’s Blood of Elves; in 2010 the winner was Graham McNeill’s Empire: The Legend of Sigmar, and last year’s was […]

[…] This is the fifth year for the Legend Award; it was first granted in 2009 to Andrzej Sapkowski’s Blood of Elves; in 2010 to Graham McNeill’s Empire: The Legend of Sigmar, in 2011 the winner was Brandon […]