Last April, Sarah Newton wrote a marvelous two-part review of Moon Design’s Pavis: Gateway to Adventure, the third (and easily the most massive) edition of a fantasy setting I first enjoyed 30 years ago.

Getting my hands on one proved to be more challenging than I expected, however. Apparently, the first printing sold out quickly and I had to wait until it was reprinted. Finally, more than a year after Sarah’s enticing review appeared here at Black Gate, I was able to sit down with my own copy.

Why was I so intrigued? Partly it was memories of that marvelous first edition, a gorgeous boxed set from Chaosium. Pavis was one of the most ambitious RPG adventure supplements ever made when it appeared in 1983: a completely realized bronze age city, packed with historical detail, strange cultures and cults, maps, thieves, profiteers, and adventurers.

Most important of all, however, Pavis was a launching point for adventure in Big Rubble, its sister publication, a ruined city overrun by trolls, snakes — and much worse things. The subtitle of the new edition is “Gateway to Adventure,” and that’s a wholly accurate description.

The new edition combines both Pavis and Big Rubble under a single cover, adding a host of new material on top of an already well-realized setting.

The result is a terrific product, with more tightly-woven encounters and plot threads and everything you need to kick off a grand adventure.

Pavis took me by surprise in when it first appeared. 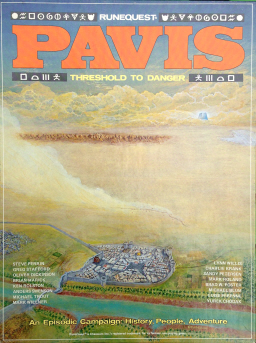 It shouldn’t have. Chaosium had had some early success with two fantasy roleplaying games in the late 70s: Steve Perrin and Greg Stafford’s RuneQuest and Sandy Peterson’s Call of Cthulhu, based on the work of H.P. Lovecraft. By 1981, it was quickly establishing a great rep for high-quality, innovative titles in distinctive oversize boxes, starting with the groundbreaking Thieves’ World.

The runaway success of that product led them to try other RPGs in the same format, including licensing Michael Moocock’s Elric novels for the role playing game Stormbringer (1981), plus the RuneQuest supplement Borderlands (1982) and two more RPGs: Worlds of Wonder (1982) and Superworld (1983).

This was already an incredible line-up. But the most ambitious releases in their fledgling product line, a set of paired adventure supplements that together provided a complete RuneQuest campaign, would arrive in 1983. Sarah describes them — and the impact they had on the entire industry — succinctly in her review:

Pavis was first treated in a game supplement back in 1983, in a beautiful boxed set featuring histories, scenarios, and maps. It was closely followed by its companion set, Big Rubble: The Deadly City.

At the time, the twin publications set a new standard in quality for roleplaying games – they became instant classics, and I’m sure there are countless gamers out there like me, who remember their first foray into Balastor’s Barracks, or the Puzzle Canal, or in the terror-stricken tunnels beneath the Devil’s Playground.

More successful boxed releases followed from Chaosium, especially a series of Call of Cthulhu adventures that include some of the most famous RPG products ever created: Masks of Nyarlathotep (1984), Cthulhu by Gaslight (1986), H.P. Lovecraft’s Dreamlands (1986), Spawn of Azathoth (1986), and even the legendary board game Arkham Horror (1984). 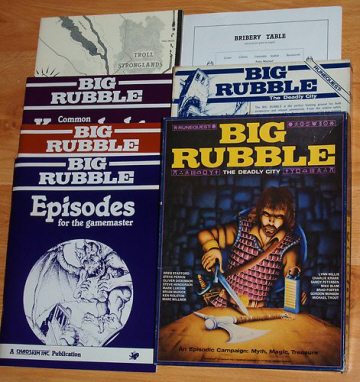 Chaosium didn’t rest on its laurels, even after that incredible run. Instead, they followed it with some of the finest gaming releases of the 80s, starting with Greg Stafford’s masterpiece King Arthur Pendragon (1985) and Ringworld (1984), based on Larry Niven’s Hugo award-winning novel.

Their last two boxed releases were Elfquest (1984), based on the popular comic by Wendy and Richard Pini, and their second Moorcock license, Hawkmoon (1986).

With a line-up like that, you’d think Chaosium would have been well on its way to being the dominating RPG design company of the 1980s.

However, it was not to be. Instead, a series of unexpected industry changes, and poorly-timed decisions, nearly doomed the company.

Shannon Applecline, an early Chaosium employee who contributed to the editorial, layout, and design of many titles, addresses this part of the company’s history in detail in his fascinating History of Chaosium article.

Here’s an excerpt from the section on the late 80s:

In 1985 Chaosium seemed poised on the edge of great success. They had a half-dozen game lines, including the innovative & exciting RuneQuest and King Arthur Pendragon. Call of Cthulhu was already producing classics like Masks of Nyarlathotep (1984). Chaosium had licensed off their best board games, and despite initial problems, Avalon Hill had put out 6 boxes of RuneQuest material including a return to Glorantha with Gods of Glorantha (1985). Arkham Horror was also on its way to becoming a cult classic.

Within a year this success would turn, and Chaosium would be teetering on the edge of bankruptcy… The first sign of the impending problems was seen in 1985. Superworld and Ringworld, which were each still being published in 1984, ceased production that year…

The downturn becomes more obvious in 1986… The same year Chaosium published their last ever boxed game, Hawkmoon. Because of their worsening finances Chaosium no longer could afford to hire labor to collate their games. Much of their staff had been laid off, and if Chaosium were an ordinary corporation, they probably would have folded, but because the owners of Chaosium truly loved roleplaying games, not just running a business, they held on, doing everything themselves.

Unfortunately, things wouldn’t get better for a while… the Chaosium downward spiral reached its nadir in 1988 and 1989. In 1988 Chaosium ceased the publication of every one of their lines except Call of Cthulhu, and published very little of even Cthulhu that year. In 1989 Elfquest would reappear (for one final publication), but it would be 1990 before Stormbringer and Pendragon were supported again. 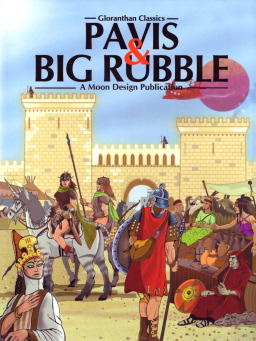 Chaosium would never produce another edition of Pavis or Big Rubble. The company survived, but spun off its Pendragon, RuneQuest, and other assets, focusing almost exclusively on its most successful property, Call of Cthulhu.

However, adding to the complexity, the RuneQuest name was now owned by Avalon Hill, who had licensed the rights from Chaosium in the early 80s. (Eventually, Mongoose Publishing licensed the rights to RuneQuest and released a new version in 2006; in 2011 The Design Mechanism announced that they had secured the rights and would be producing a 6th edition.)

Moon Design didn’t let the lack of a RuneQuest license inhibit them. Instead, they produced their own RPG: HeroQuest, a narrativist role-playing game, written by Robin D. Laws, designed as a generic system that could be easily used with existing Glorantha material.

These books did an excellent job of making the most important Glorantha texts available to new players once more, as the original products long ago became impossible to find, hoarded by collectors and commanding exorbitant prices — when you could find them. (You can still order the PDF versions in the Glorantha section of the online catalog.)

Okay, so the reprinted edition of Pavis and Big Rubble became just as collectible as the original boxed sets from 1983. That didn’t turn out as expected.

Plus, the reprint editions, marvelous as they were, really focused on old material. The folks at Moon Design had greater ambitions than that — they wanted to update and expand the original Gloranthan products, both to tie them in with HeroQuest and update them to 21st Century gaming standards.

The result was Pavis: Gateway to Adventure, a beautifully designed and laid out 416-page monster that’s one of the most impressive gaming accessories I’ve seen in recent memory (and that’s saying something). Here’s Sarah again:

It’s an amazing accomplishment – quite simply the best city supplement I’ve ever seen for a roleplaying game. It’s so ambitious it’s breathtaking; the scope, depth, and detail which Greg Stafford and Jeff Richard have provided here have set the bar again for roleplaying city supplements; this single book alone easily contains enough content to fit two separate RPG supplements of normal size, and is easily worth the price. Some of the material here has seen the light of day before in other forms; but most of it is new, and I’d heartily recommend it to anyone interested in roleplaying in Pavis, using either HeroQuest or any other system; or interested in roleplaying cities in general; or just looking for inspiration or a cracking read on fantasy city, culture and worldbuilding.

So what’s in the book?

Pavis: Gateway to Adventure contains full descriptions for New Pavis, Pavis Country, Sun Dome County, Prax, the Ruins of Feroda, and the Pavis Temple, as well as 66 detailed random encounters and 20 special encounters — many of which are complete adventures in their own right. 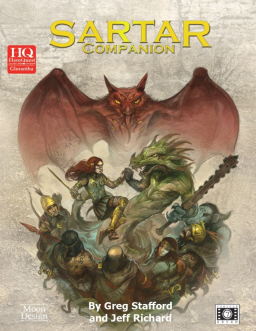 Four full-length scenarios are also included: Rough Business; The Celestial Engine; Red Moon Rising; and the Purple Troll, as well as full write-ups for six Gloranthan cults: Pavis, Flintnail, Lanbril, Yelmalio, Zola Fel, and the Seven Mothers. If that’s not enough, the book is heavuly illustrated, with spot art on almost every page, and more than thirty maps.

Just flipping through the book is rewarding, and the encounters are inventive and cleverly designed. Sludge the Enforcer, the mad beggar who loudly rants about a secret only the players know just as they pass, is a great example — I may steal him for my ongoing AD&D campaign.

I’ve been impressed enough with Pavis that I also ordered their second Gloranthan HeroQuest title, Sartar Companion. This is a huge setting and scenario book that provides countless hours of sandbox play in the Kingdom of Sartar, including detailed descriptions of many important locations, more than 40 Road Encounters and 30 Special Encounters, and seven complete campaign scenarios.

Pavis: Gateway to Adventure, by Greg Stafford and Jeff Richard, was published by Moon Design and Cubicle Seven in November, 2012. It is 416 pages in deluxe, oversize paperback, with a six-page color insert. It is $59.99 for the print edition, and $29.99 for the PDF. Order directly from Moon Design here.

Sartar Companion, by Greg Stafford and Jeff Richard, was published by Moon Design and Cubicle Seven in November, 2012. It is 296 pages in deluxe, oversize paperback. It is $49.99 for the print edition, and $24.99 for the PDF. Order from Moon Design here.

I never had the original Pavis, but I remember reading the review in Dragon and having some serious covet.

I may have mentioned this if i commented on the previous article regarding Pavis but just in case. Readers may enjoy an anthology of short stories based in Pavis by Oliver Dickinson called The Complete Griselda. I did.
http://www.griselda.org.uk/main.html

> I remember reading the review in Dragon and having some serious covet.

Ha! Yeah, those DRAGON reviews made me a much poorer teenager. But richer in many other ways. 🙂

I was just lucky to live near a superb game store in the early 80s: Fandom II, in Ottawa.

> Readers may enjoy an anthology of short stories based in Pavis by Oliver Dickinson called The Complete Griselda. I did.

Hi Tiberius. You must have mentioned it before, because I know I’ve checked out at least two of Oliver’s stories recently. Thanks for the rec!

[…] been on a bit of a RuneQuest kick recently, inspired by my purchase of the incredible Pavis: Gateway to Adventure setting from Moon […]

[…] part of my fascination was the result of Chaosium’s support efforts, especially the amazing Pavis and Big Rubble boxed sets. I still consider them some of the finest gaming products ever created, […]