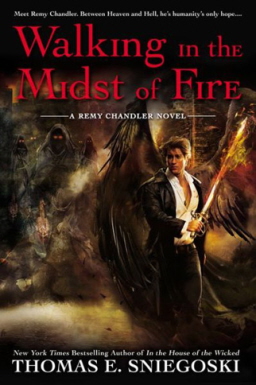 Walking In the Midst of Fire is the sixth installment in the Remy Chandler series, which began with A Kiss Before the Apocalypse. These books are a mix of urban fantasy, paranormal romance, and noir detective fiction, following the exploits of an angel private investigator trying to lead a normal life. (Not gonna happen, Remy.)

Author Thomas E Sniegoski wrote the YA series The Fallen before switching to adult fiction with the Remy Chandler books. I first came across his name in the world of comics, however, when he wrote the prequel to Jeff Smith’s brilliant fantasy Bone, the mini-series Stupid, Stupid Rat Tails: The Adventures of Big Johnson Bone.

Remy Chandler, angel private investigator, is trying his damnedest to lead a normal life in a world on the verge of supernatural change. He’s found a new love — a woman his dog, Marlowe, approves of — and his best human friend is reluctantly coming to grips with how… unusual… Remy’s actions can be. And he’s finally reached a kind of peace between his true angelic nature and the human persona he created for himself so very long ago.

But that peace can’t last — Heaven and the Legions of the Fallen still stand on the brink of war. Then one of Heaven’s greatest generals is murdered, and it falls to Remy to discover who — or what — might be responsible for the death, which could trigger the final conflict… a conflict in which Earth will most certainly be the beachhead.

The deeper he digs, the further he goes into a dark world of demonic assassins, secret brothels, and things that are unsettling even to a being who has lived since time began. But it is not in his nature — angelic or human — to stop until he has found the killer, no matter the personal price…

I read this last weekend, and while it’s (imho) much better than book 5, it’s still trending too far down into YA for my comfort. I’m debating giving up reading these.