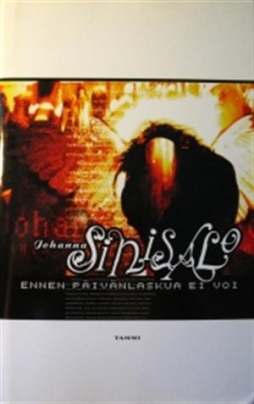 A few years ago, a cat came to live with me under unexpected circumstances. (This is getting around to a look at a fantasy novel, and no the novel has nothing to do with cats as such, and yes I have a point.) I’d never had a pet when I was young, so I suddenly found myself dealing with a new range of experiences and emotions; and found also that the depictions in most media of relationships between pets and their humans were notably lacking. There’s a complexity of living with, and to an extent being responsible for, a non-human animal. You have to learn about (and sometimes worry about) diet and medical needs and what certain behaviour patterns mean. You have to learn how to communicate with a creature that does not use words — but which may be surprisingly good at understanding emotions in a voice. These sort of things are rarely shown in most stories about humans and animals, but they’re a crucial part of the experience of dealing with a pet.

Which brings me around to Johanna Sinisalo’s book Ennen päivänlaskua ei voi, a Finnish book translated into English in 2003 by Peter Owen as Not Before Sundown and then again the same year by Herbert Lomas as Troll: A Love Story. The book won the 2000 Finlandia Prize for best novel written by a Finnish citizen and was one of the winners of the 2004 Tiptree Award, apparently in the Owen translation. I read the Lomas version, and was impressed by the prose and structure, by the book’s conceptual flexibility and symbolic heft, and by Sinisalo’s depiction of a man coming to learn to live with an inhuman creature — specifically, a troll. It’s not quite a ‘pet’ in the sense of a domesticated animal, and the relationship between man and troll is certainly different than that of the usual human and pet. But some of what the main human character feels and does is recognisable to me as somebody who lives with a cat.

And I think that kind of relationship informs the basic theme of the book: otherness and the things one person projects on another. Sinisalo’s book acknowledges that the most profoundly ‘other’ creatures around us are the animals we call ‘pets.’ They are adopted members of our families; but do not share the biology that makes us what we are, and that shapes how a human thinks. Their thought processes are alien to us. We try to understand them, we think we come to know them, but for all our good intentions probably still can’t help but project ourselves onto them. That tendency to project fears, hopes, and narratives onto others is I think what drives Sinisalo’s book. 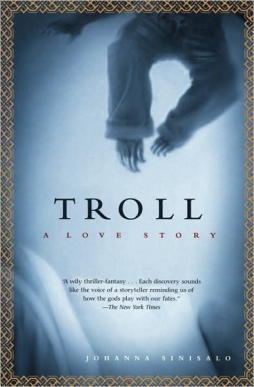 The plot’s fairly simple. Mikael, also known as Angel, is a graphic artist and photographer in the city of Tampere when he comes across some youths up to no good outside his apartment building; they run when he threatens to call the police, and Angel finds they’ve been beating up a troll. Angel takes the troll into his home and we follow him as he starts to learn about the creature: the book allows us to follow his research with ‘excerpts’ of web pages, books of myth, and anthropological texts (the anthology feel of the book, of a text interpenetrated with other texts, is one of the novel’s many successes). It turns out that trolls are rare but very real and non-supernatural creatures, carnivores that inhabit the north of Scandinavia and Russia, undiscovered officially until 1907, but showing up constantly in folk tale and legend. Angel tries to domesticate the troll, which he names Pessi. As the book goes on, Angel forges an increasingly deeper bond with the creature, but also finds himself exploiting the troll, using him as an image in an advertising campaign. It all comes to a well-structured climax, delicately balancing theme and character, coming up with endings (some of them very open endings) for all the characters involved.

In genre terms, the book is on a literal level science fiction, but it’s science fiction that interrogates fantasy and fantasy images. The troll is a real creature with a defined evolutionary background, a set place in the food chain, a specific relationship to humans who invade its territory. But it’s also a creature that comes out of myth, that turns up in sermons and children’s books. Sinisalo contrasts the reality of the troll, as Angel comes to understand it, with fictional representations of trolls: with what humans have made of the idea of the troll.

I don’t think it’s simply saying that the humans misunderstood trolls. They did, but the stories they told had their own internal logic and reasons for being. They kept some bits of the reality; like, say, a magic-lantern projecting its image over a boy’s bedroom and so blending the projection and the underlying truth. Mainly, though, you see that the symbol of the troll was used to mean something in a specific context, a human context relevant to humans. Only — what then of the trolls themselves? 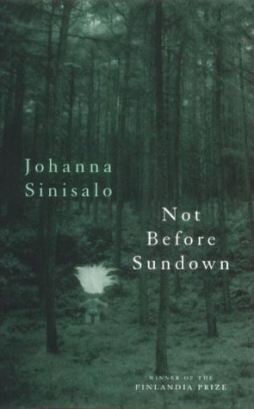 Following Angel, we see him trying to understand the creature he’s now living with, and that he comes to love. He tries to understand what foods Pessi needs, how to communicate with him, and what is best for him; and while the human stories about trolls are interesting and occasionally have some moments of intuited truth, they don’t necessarily help Angel much in actually understanding the literal troll before him. The troll, by his nature, is ultimately alien: lacking in language, different in needs, something that it stretches one’s humanity even to try to comprehend.

It’s a point that I think can be seen in the relations among the human characters, all in some way different from each other, all of them projecting their own ideas onto one another without noticing it. Angel’s downstair neighbour, Palomita, is a mail-order bride psychologically isolated and physically abused by her Finnish husband; Angel sees her only in passing and doesn’t understand any of this, but when we see things from her perspective, we see her desperation and the romantic hopes she comes to pin upon Angel — not knowing that he’s gay. But these characters, however different from one another in culture and gender and sexuality, still have a similarity of body and biology. They all have language, which they can use to define themselves and explain themselves to each other. The troll is only itself.

We read excerpts of stories about trolls that Sinisalo’s imagined; we see the idea of trolls used as a function of the psychological needs of the people writing about them. We see the troll both as a clever trickster and as a Satanic, demonic monster. As the book goes on, we find out that there’s a specific sexual dimension to the nature of the troll, again with a scientific explanation based on pheremones, but one that manifests in stories and human imaginings: as the diabolical, as something that needs to be repressed. The imagery tying trolls to Satan contrasts with Mikael-Angel (whose name is commented on throughout the book); it’s an intriguing sub-theme. Mikael’s not immune to the troll’s pheremones, is in fact specifically vulnerable to them, and the book explores the sexual dimension of otherness, how one finds a way to relate to the other in one’s bed. 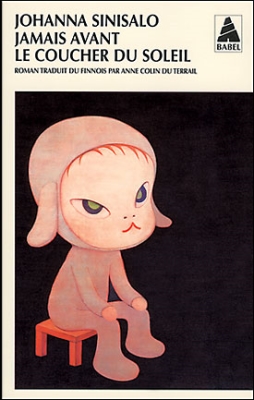 Which means that the troll becomes also an image of nature, and of fundamental natural drives. A symbol of how the natural becomes perceived as the infernal; but a symbol also of how the natural and human worlds are linked, if not ultimately the same. Why was Pessi in the city of Tampere, when trolls normally stay away from humans? It turns out trolls are being seen more and more often in urban spaces — because the climate’s changing.

Fundamentally, the book explores the animality of the troll. Pessi’s unknowable; we don’t see through his eyes, but only from the perspectives of other characters trying to understand what they’re seeing. He clearly does not think like us, does not have the same instincts or understanding of the world. Still, he’s a distinct character without speaking; like all good characters, we know him by his actions. It’s how you come to know animals when they live with you, watching them and coming to see their moods and modes of play and the stories they tell themselves. Their minds are not the minds of human beings, but you swiftly learn that they are not therefore to be dismissed.

(I should note that I’ve heard it said that humans are different from animals like cats and dogs because cats and dogs don’t tell stories. As far as I can tell, this is not true. My cat tells himself stories all the time. For example, one of them, loosely translated into English, seems to go something like: “Kitty is hungry. Kitty finds food bowl is empty. Kitty meows at house ape. House ape fills food bowl. Kitty happy ever after.” It’s one of his favourite stories and one that he tells himself several times a day, to different results. And it is a story: it has characters, plot, tension, rising and falling action. It serves him as an inspiration for his behaviour — specifically, meowing at the house ape. There are other stories he has, in which I am not involved and cannot interpret, that involve plot elements like ‘Kitty runs from one end of the apartment to the other at top speed’ or ‘Kitty claws ferociously at a piece of rug.’ Hopelessly simian, I can only stare and try to guess what narrative structures drive felines.)

It seems to me that the subtitle to Lomas’s translation is exactly right. Sinisalo’s book is, in one reading at least, essentially a love story. It’s not necessarily romantic love, though, notwithstanding the sexual component of the book. It’s a story about how one comes to love, how one comes to understand another living creature enough to love them, and about the effort of understanding — how one works through the mistakes one doesn’t know one’s making. Troll: A Love Story is a brief book, but tight and powerful. It packs a wide range of meaning into the symbol of the troll, while at the same time questioning the whole process of turning a thing into a symbol. It’s a touching look at what it means to be human, and not to be human. As such, it’s a challenge to other fantasy, to all the depictions of non-human folk: dwarves, elves, orcs, dragons … and, indeed, trolls. These creatures, it suggests, should not be understood as human. Sinisalo’s book shows the strangeness these fantastic entities can have, when most profoundly conceived. Her troll is emphatically not a creature that can be mistaken for one of us. As such, it implies a whole other world — our world, if we can come to understand it.