Pirates were a popular subject in midcentury Hollywood — but piracy, not so much, because it was obviously committed by bad people who would take all your stuff, given the chance (and maybe do worse). Thus the common cinematic usage of the term buccaneer, which sounds like it just describes a gentleman adventurer with an attitude rather than someone who would casually cut your throat and throw your corpse over the side. Aye, call your pirate movie a buccaneer’s tale, and even theatrical markets in the iron grip of the Legion of Decency will smile and let your film be shown at Saturday matinees to audiences full of kiddies. All keelhauling is to be conducted offscreen, if you please. 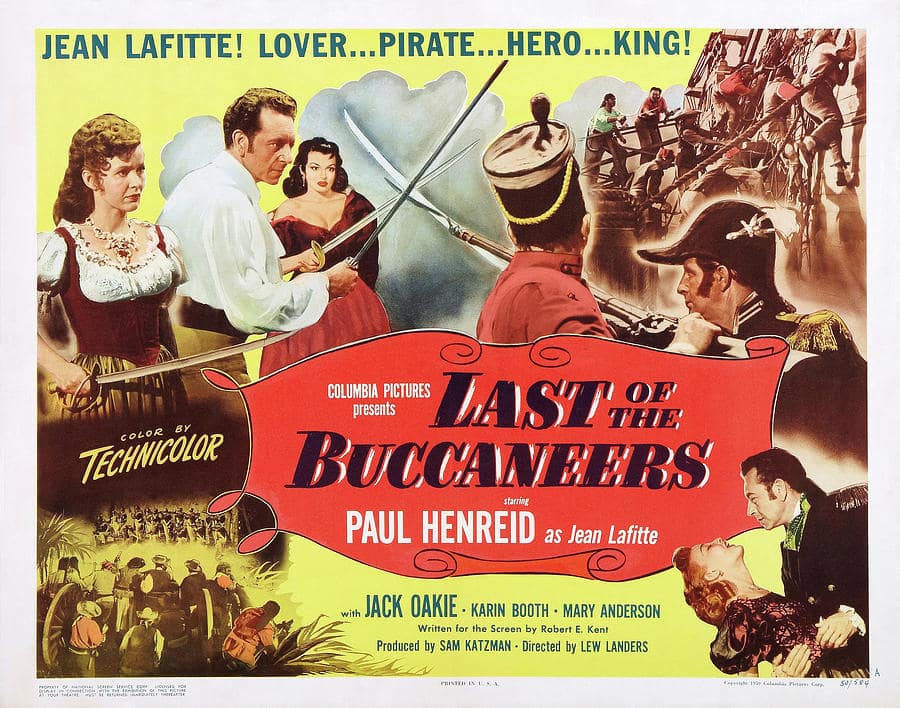 Last of the Buccaneers

In the late Forties, leading man Paul Henreid was blacklisted in Hollywood, accused of sympathy for the Communist Party and unable to get cast in his former serious dramatic roles. However, he’d made a successful pirate move, Spanish Main, in 1945, so independent producer Sam Katzman was willing to cast him in another. And thus the urbane Henreid, Victor Laszlo himself, was reinvented as a swashbuckler.

So, how’s the movie? Fair to middling. Henreid is pirate Jean Lafitte and the story picks up right after the Battle of New Orleans, as this is a sort of sequel to Cecil B. DeMille’s The Buccaneer (1938), and the story replicates many of the elements of the DeMille film, so it isn’t particularly original. Henreid as Lafitte is a reasonable replacement for Fredric March, but instead of the mighty Akim Tamiroff as gunner Dominique You, here we get Western sidekick character actor Jack Oakie as “Dominick the Pirate from Kentucky” — he even sings that as a song about himself. Ugh!

After helping defeat the British, Lafitte receives official thanks but his ships are confiscated, so he takes letters of marque against Spain from Venezuela, then fighting for its independence, and seizes a Spanish ship right off the New Orleans docks, sailing it away after making its crew walk the plank a hundred yards from shore. Harsh! But Lafitte has a personal reason for harassing Spanish shipping: most of the merchant ships are owned by Spanish magnate George Mareval (Edgar Barrier), who refuses to let his niece Belle Summers (Karin Booth) marry Lafitte. The privateer relocates west to Galveston, establishing a settlement despite the opposition of the Karankawa Indians, and Mareval plots to trick the American garrison at New Orleans into marching against it.

There isn’t much piracy in this film, frankly, just a couple of boarding-action montages before a final battle of cavalry sabers vs. cutlasses, and there’s even less history in it than piracy. Henreid does fine, of course, but the best thing in the picture is the performance of Mary Anderson as the sassy pirate lass Swallow, who swings a cutlass with confidence and loves Lafitte hopelessly, while despairing about the captain’s pretensions as he pursues his society gal. And alas, in the end blond respectability prevails over brunette sass. 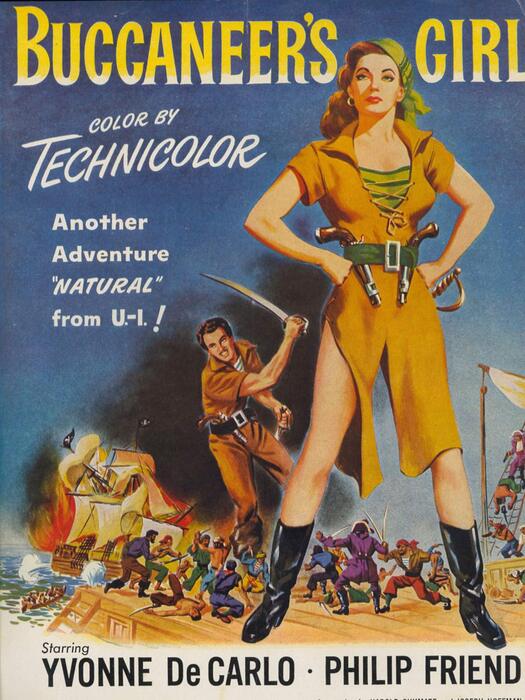 It looks like the idea here was to make a film like the classic Greta Garbo-Jimmy Stewart Western Destry Rides Again — but with pirates! Not a bad idea, but if that’s where Universal Pictures was aiming, they missed the mark by a wide margin.

Around 1800, a singer and dancer from Boston named, er, Debbie (Yvonne De Carlo) stows away on a southbound ship that gets captured by pirates, but she’s spunky and takes no guff from mere filibusters, so she winds up in New Orleans instead of marooned on a desert isle, as the suave Captain Baptiste (Philip Friend) originally threatened. Once everyone arrives in the Crescent City, it becomes clear that this is not just a pirate adventure but also a comedy, a musical, and a romance.

Unfortunately, the jokes aren’t funny, the songs are mediocre, and there’s no chemistry between the romantic leads. Production values are good, the Technicolor is lovely, and there are a couple of naval actions portrayed by decent Hollywood ship models, but otherwise this is a write-off. 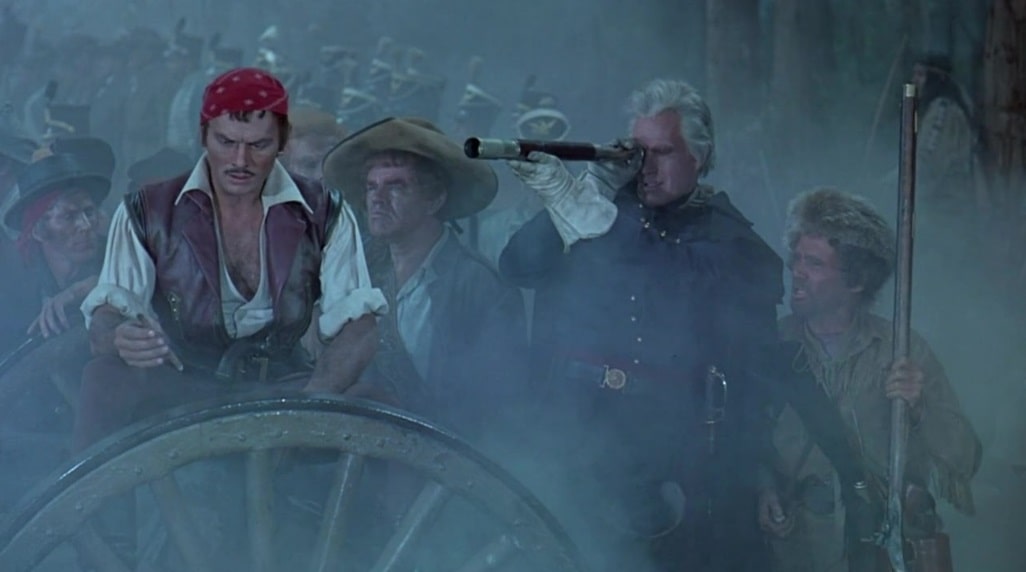 This is Cecil B. DeMille’s 1958 widescreen Technicolor remake of his 1938 film about pirate Jean Lafitte and the Battle of New Orleans. It stars Yul Brynner (as Lafitte) and Charlton Heston (as Andrew Jackson), both of whom had been breakout stars for DeMille in The Ten Commandments two years before, and for that reason you might expect to like it even more than the earlier version.

And for a fact, Brynner and Heston do not disappoint. Brynner’s brooding screen presence is even more imposing than that of predecessor Fredric March, though he lacks the glimpses of touching vulnerability that March gave the character: Brynner is bulletproof. And Heston’s towering charisma eclipses even Brynner’s formidable magnetism. To take advantage of it, Jackson here gets triple the screen time he got in the ’38 version, and it was a wise move.

It comes at a cost, however: the expansion of Jackson’s role is at the expense of Lafitte’s, meaning we get a lot less piratical scoundrelry and Gallic swagger, and a lot more self-congratulatory American mythmaking. And unfortunately, the story’s told with an old-school staginess that’s even hokier than it was twenty years earlier. DeMille was ailing — this was his final picture — so his son-in-law, Anthony Quinn, is the nominal director, but this film has ol’ Cecil’s showy fingerprints on every frame. The entire production is bloated with self-importance, and the Technicolor is so damn bright it often looks cartoonish.

The script is substantially rewritten from the original, and the dialogue somehow got even more clichéd and wooden in the process, so stiff that it’s more than most of the supporting cast can comfortably handle. Inger Stevens as Lafitte’s love interest, the governor’s daughter (historical interruption: LaFitte actually romanced the governor’s wife), is a blonde mannequin, and the aging Charles Boyer as Napoleonic cannoneer Dominique You can’t compete with the energetic performance of his predecessor, Akim Tamiroff. E.G. Marshall and Lorne Greene are similarly wasted. The only actors who can mouth these awful lines with conviction are Brynner, Heston, and Claire Bloom in an early standout role as a hard-bitten pirate wench.

The piratical antics of the original are sadly diminished, because this time around the emphasis is on building up to the set piece of the Battle of New Orleans, expanded from ten minutes in the ’38 version to a full half hour here. This does not improve it: all the extra fussing about supply shortages and scouting the British lines just drains the urgency out of the fray, and by the time of the battle’s inevitable end in windrows of fallen redcoats, we’re glad it’s over.

At least this version retains LaFitte’s post-battle humiliation, repudiation, and escape to the freedom of the high seas, an ending that comes across as a strange refutation of all the nationalistic breast-beating that precedes it. All in all, The Buccaneer is an interesting failure almost redeemed by the sheer star power of its two leads.

While I have seen both of DeMille’s versions of The Buccaneer, I have somehow missed the other two films completely. I don’t know if I’ll bother tracking them down (Jack Oakie as Dominique You? And it’s a musical? Ahhh…no)

Thank you once again, Mr. Ellsworth, for tracking down films I would otherwise not even knew existed. (And warning me about them!)