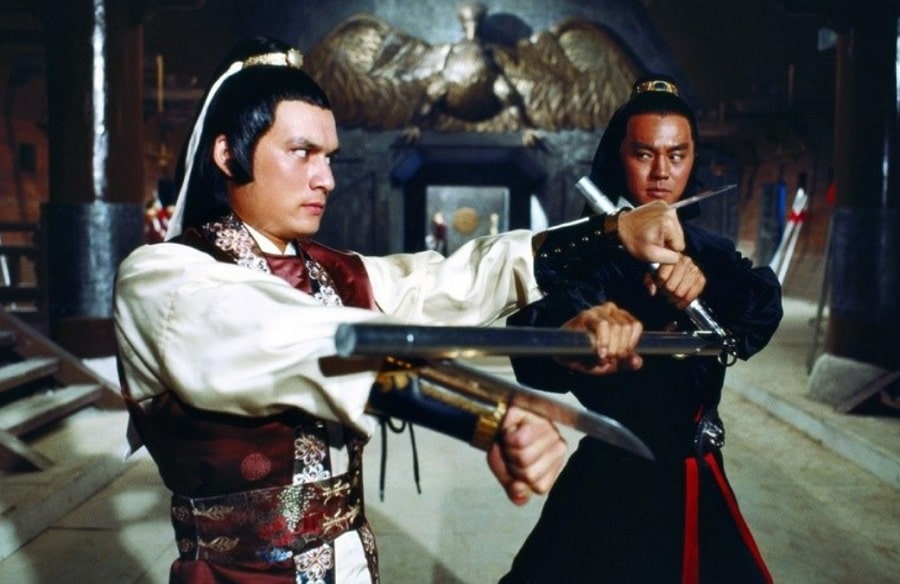 Wuxia, which can be translated as martial chivalry, is the term usually applied to tales of ancient Chinese armed martial arts, especially when retold in the context of the Hong Kong action film tradition that began in the Sixties. Wuxia movies were eclipsed by the Seventies kung fu boom but never quite went away, reviving full force in the Nineties and staying strong to this day.

By the late Seventies there was a changing of the guard, as the founding knights, directors King Hu and Chang Cheh, gave way to rising stars of chivalry such as Sun Chung and John Woo. The latter took the lessons of the founders, absorbed the frenetic dynamism of the kung fu years, and carried wuxia films forward with a new joy and energy.

This is entertaining, but it’s the least effective of King Hu’s early wuxia films. During the Ming Dynasty, the Chinese coast is plagued by pirates led by renegade Japanese samurai, in particular three ronin, who are so persistent that General Yu Dayou (Roy Chiao) is tasked with bringing their depredations to an end.

Instead of a large force of troops, General Yu assembles a small team of martial artists to outwit and capture the pirate leaders, all of them military men who seem to know each other except for the modest and mysterious swordsman Wu Jiyuan (Ying Bai), “The Whirlwind,” and his wife, expert archer Wu Reshi (Feng Hsu), who never speaks.

Except for a bit of double-dealing among the Chinese bureaucrats, there isn’t much plot here, just a series of encounters, traps that succeed or fail, between the martial artists of General Yu and the “white tiger” pirates led by the ronin, whose strength is mainly in numbers. The story is told from the viewpoint of General Yu and his fighters, who are stripped to their essence, without much character beyond their individual fighting styles, communicating by gesture and by one fighter’s melancholy flute tunes. In one amusing skirmish, Yu’s orders are conveyed by the sudden and repeated rearrangement of stones on a go board, as the white-clad pirates move in to surround the dark-clothed defenders.

However, all the attempts to trap the pirates are inconclusive, so the Whirlwind Wu couple decide to go incognito into the ranks of the pirates to discover their secret lair. This leads to the best scenes in the picture, when Jiyuan and Reshi, having penetrated to the ronins’ headquarters, are tested by attacks from various martial arts experts in an inventive series of short, sharp combats. After defeating their opponents, the Wus are warily accepted among the pirates, but they escape at night to bring the location of the secret headquarters back to General Yu. This provokes the pirate leadership into pursuit, and at last they are drawn out of their lair and into a trap they can’t evade.

There are some striking outdoor settings in this film, though less striking than those of King Hu’s Dragon Inn, A Touch of Zen, and The Fate of Lee Khan. Most troubling is that the careful editing of the previous films, which often featured long and carefully composed establishing shots, has been abandoned in favor of a staccato style of abrupt cuts that rarely gives the eye a rest. The combat is similarly simplified from choreographed dance routines into rapid brushstrokes of sudden action. Writer-director Hu seems to be groping for the distilled essence of wuxia combat, but the result misses the careful balance of his earlier efforts. 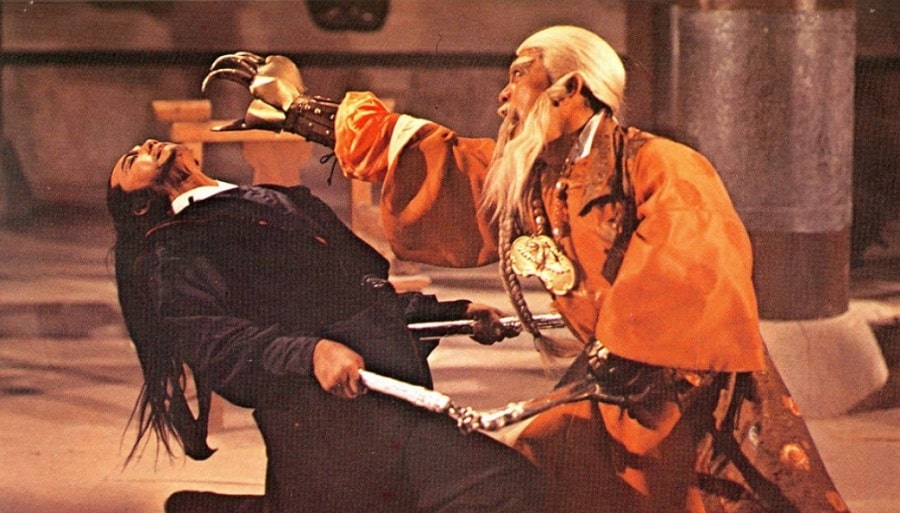 A wounded man on a lame horse rides blearily across dry, rocky terrain, losing blood until he tumbles from the horse in a faint. Eventually a second man comes riding along, spots the wounded man, dismounts, wakes him and offers him a drink. The first man comes to in a wild terror, gulps down all the second man’s water, refuses to give his name, and then steals his benefactor’s horse and gallops off.

The first man has… issues. He is a bandit, Chik Sing (Ti Lung), a member of the notorious Iron Boat Clan — or rather, an ex-member, now pursued by the Twelve Eagles, the clan’s enforcers. We learn this when the second man (Alexander Fu) catches up to Chik and starts asking questions, ironical but persistent. Like his former brothers, the other Eagles, Chik is an orphan who was raised in villainy by Yoh Xi Hung (Ku Feng), the wicked leader of the Iron Boat Clan, an older man but still mighty in his kung fu. When he sends his Eagles on a raid and Chik is wounded and left behind, the young man is helped to recovery by an altruistic family, and for the first time he learns about love and compassion. It changes him, and he begins to question the cruel methods of the master of the Eagles.

However, Chik has long lived the life of a thief and a killer, and still has a lot to answer for. And he’s going to have to answer for some of it to his mysterious and inquisitive benefactor.

This film is structured as an extended flashback in which Chik tells the story of his life and gradual change of heart, punctuated by colorful wuxia duels with exotic Chinese weapons whenever another squad of Eagles catch up to him. It’s a simple story but it’s effective, primarily because of the sympathetic star power of Ti Lung as Chik and the sardonic charisma of Alexander Fu as his nameless new friend. Suspicious and wary though they are, the two share a genuine comradely chemistry that makes the film work.

A large percentage of the film’s running time is spent in fast-paced wuxia beatdowns, and it’s a tribute to director Sun Chung that these fights are sufficiently varied that they stay fresh all the way to the end. That end, of course, pits Chik and his finally named (but we won’t spill it here) mysterious friend against Yoh Xi Hung himself, whose brass-clawed kung fu is matched only by his cunning and deceit. The shock ending, though it was foreshadowed well in advance, still comes as a punch to the gut. Recommended.

This wuxia film written and directed by John Woo is broad, almost cartoonish, and very entertaining. Before making his name with action crime films, Woo directed kung fu and wuxia movies for Hong Kong’s Golden Harvest studio. He made Last Hurrah as a sort of tribute to his mentor, Chang Cheh, especially referencing Cheh’s Have Sword, Will Travel, but adding the kind of double crosses and plot reversals that would become hallmarks of Woo’s later works.

In ancient China, Kao Peng (Lau Kong), the son of a respected gang boss, is getting married at his father’s fortified hilltop estate when the festivities are crashed by a rival boss, Pai Chung-tien (Hoi Sang Lee), killing the father and driving away the son, who escapes vowing revenge. Kao Peng is advised that only retired fighter Chang San the Divine Blade (Wai Pak) has the chops to defeat the bandit boss, so Kao Peng decides to test Chang San by hiring another famous swordsman, An Tien-ming, to take him on.

But Chang San, though young, has hung up his sword, is working as a humble horse-washer, and refuses to fight. An Tien’s provocations are amusedly observed by the bibulous and sardonic Ching I (Damian Lau), another sword-for-hire who decides he likes Chang San — though not enough to help him.

Meanwhile, Kao Peng is trying to bully his father’s old weapons master into giving him a legendary blade, the Moon Shadow Sword, but the grandmaster insists his paltry skills are unworthy of it. Frustrated, Kao Peng focuses on his first plan, deceitfully befriending Chang San for his own ends. Chang San is finally aggravated by An Tien into picking up the Divine Blade and meeting the swordsman for a spectacular duel, which Chang San wins, but meanwhile Kao Peng fakes an attack on his own house by Pai Chung in which the old grandmaster is wounded. Chang San, outraged by the slaughter of Kao Peng’s retainers, swears to get revenge on Pai Chung for his new friend.

After some humorous intrigues, Ching I, who has been spying on Pai Chung’s headquarters, joins Chang San for the big raid on the bandit stronghold. Before the pair can get to Pai Chung, however, they first must defeat his 36 first-level goons and then half a dozen colorful martial arts experts, including such notables as Yellow Weasel, the Phantom Spear, and the Mad Blade of the Sleeping Buddha. This is hot stuff, but the relentless final combat with Pai Chung, which inexplicably takes place in an underground vault lit with a thousand candles, is even better. However, the treacherous Kao Peng, who’s finally gotten his hands on the Moon Shadow Sword, intends to be the last martial artist standing.

This is a richly colorful film with inventive and intensely theatrical swordplay, replete with snappy dialogue and deft comic touches. Everyone involved seems to be enjoying themselves and having a good time. So will you.

Speaking of Taiwanese films, if you haven’t yet, I recommend checking out Thrilling Bloody Sword, now available on Blu-ray from Gold Ninja — it’s a kind of insane fantasy martial arts take on, of all things, Snow White and the Seven Dwarves.

Avenging Eagle is a film anyone interested in Wuxia should watch.

I find that Wuxia has more of a story than kung-fu films which, as entertaining as they can be, are often just a series of fights.

I’ve never even heard of these films!

Thanks for the tip, Mr. Ellsworth.

“ renegade Japanese samurai, in particular three ronin”
Well, by definition, all renegade samurai are ronin, so this description does not make much sense to me.