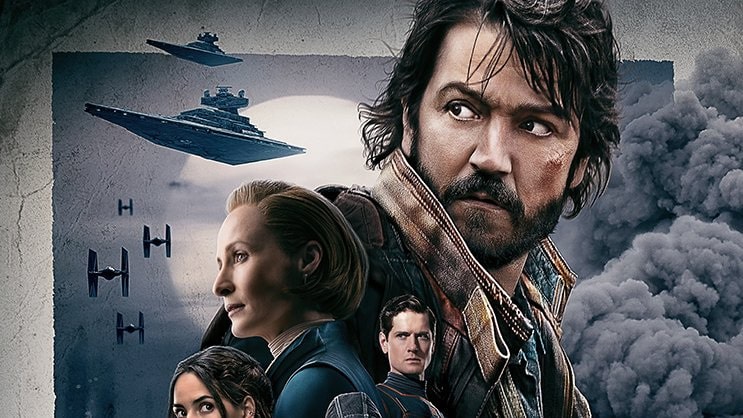 “Doctor, I’m at my wit’s end with my husband. He’s – changed. It’s like I’m in one of those paranoid movies.”

“I must repeat, madame, lie back. Take a deep breath. Tell me about it as if you are speaking to a trusted friend.”

“Well, it’s this show. Andor. It’s a Star Wars thing. My husband watches it every week. He’s anxious all Monday and Tuesday about it lately.”

“Ah yes. Tony Gilroy is the showrunner I believe.”

“I think so. At first it was just little things. So easy to dismiss. He’d be looking through his old Star Wars books, these sort of technical manuals, and when I asked him about it he said he was trying to figure out if the ship in ‘Kassa’ was an old BTL-B with the engine housing still on or something like that. He asked our son if any NERF guns looked like Cassian’s blaster.”

“Every week he gets worse. He texts friends about the artifacts in somebody called Luthen’s shop. Which year before the Battle of Yavin Mon Mothma resigned her senatorship. If anyone had an old polaroid camera. Strange stuff. Then he’s been eating cereal lately.”

“So the choice of cereal is significant to you?”

“And it only gets worse. He stands with his back to the wall and peeks around the corner before going out into the street. He calls friends and instead of saying ‘Hi, it’s Eric’ like he usually does it’s ‘Have the Dizonites stopped screaming, Clarice?’ And then there was this morning. This morning was the worst yet.”

“I was getting ready while he was in the shower.”

“This seems a normal situation for a married couple.”

“No, it’s – I looked over at him and he was, just standing in the shower, letting it run on him, then down the drain. With his palms at the back of his head and fingers interlocked. Emotionless. It was so creepy, doctor. Is he . . . Is he . . .”

“How old is your husband again?”

“Ah. Yes. Well, I am seeing a great deal of this with Generation X. They discovered Star Wars in their youth, the original movies, you understand, and throughout their life they have been seeking that childhood sense of excitement and interest, but because the Star Wars films have never been presented as serious drama with adult themes, the excitement is just not there. Since childhood, they observe Star Wars. They do not experience it. Now, along comes Andor. It is excellent. Fascinating characters. Tense situations. Real stakes. Rich in social commentary. No space wizard is going to show up and fix everything by gesturing with his hand. Their emotions, perhaps for the first time since the original trilogy, are again linked to the content. This can be difficult for some. It is the first time they have been truly excited by Star Wars since 1983, and even then the Ewoks were a bit of a wet blanket.”

“So when the series is over, he’ll be his old self?”

“Almost certainly. He may want to vacation at the beach this year, and if you do and he asks for Peezos and Green Revnog, just tell they only have Margaritas and tostada chips and Google Maps does not show an ‘Arkie’s’.”

*Writes on notepad ‘DO NOT MENTION SEASON TWO IS BEING FILMED AT YAVIN TEMPLE!!’ and underlines it*

“Yet you do not seem relieved.”

“Oh, well, this ‘Bix’ is a cute little robot. Always mit the misadventures. Zey always have ze funny robots in zese things, you must remember. Now, our time is up. We will talk again after Episode Ten, yes?”

How is ANDOR so good??

I think it’s because it truly is an adult show, as you note. This feels like the first adult incarnation of STAR WARS, and it’s amazing and eye opening.

Also, Tony Gilroy is incredible. I had my doubts about him as a showrunner, since he’s always been best a feature length, but he has set those doubts to rest.

me and a friend had a discussion about why no one s watching it seems but it’s super good. we came ot the conclusion it is a show written like a novel with side characters that have their own motivations and thye dont skip between the side stories abruptly but as if it’s a new chapter. the fact it isnt mindless action like every other disney+ genre show or so it seems. i think the motives are clear also which helps move the story along.

It’s steadily climbing the charts. Right behind Cobra Kai right now. The season isn’t even done yet. I think once it’s complete more people will check it out.

I’m sitting by myself at the Black Gate Andor finale viewing after party. I like WW II resistance movies. I like Rogue One.

Man – Andor is plodding and dull. I needed two sittings to get through most episodes. I actually re-watched ‘Where Eagles Dare’ after episode seven to get my fix.

Andor felt like something I had to do, instead of something I looked forward to each week. I’ll pop in Kelly’s Heroes, or even Edge of Darkness, before a re-watch of this one.

Andor isn’t over yet, as of today it still has 3 more episodes.