Last month, as part of my master plan to examine every interesting science fiction paperback ever printed, I surveyed five of the finest SF anthologies of all time: the first Hugo Winners volumes, all edited by Isaac Asimov and published by Doubleday between 1962 and 1986.

Although the first two volumes, collected in one big omnibus by the Science Fiction Book Club in 1972, were on the bookshelf of every serious SF fan in the 70 and 80s (and much of the 90s), by the time Volume IV and V were released in the mid-80s, sales had fallen off so significantly that neither one was reprinted in paperback. Asimov, who frequently noted that “the fine folks at Doubleday have never said no to me” — even indulging him with a massive 1,005-page, highly uncommercial vanity project in 1974, Before the Golden Age, a bunch of pulp stories threaded together with Asimov’s reminiscences of growing up in Brooklyn — found Doubleday saying ‘No” to further Hugo volumes.

It was Martin H. Greenberg, Asimov’s frequent collaborator, who talked him into doing additional installments. Together they produced three more: The New Hugo Winners, Volume 1 (1989) & Volume II (1992) and The Super Hugos, released after Asimov’s death in April 1992.

Back covers to The New Hugo Winners, Volume I & II and The Super Hugos

Here’s Asimov, from the introduction to The New Hugo Winners, Volume I.

Frankly, I had had enough, and I rather made up my mind that I wouldn’t do any more. I had aged a year or two in the quarter century since I had begun. I no longer knew, with any great intimacy, the flood of dazzling new writers who had entered the field and were garnering awards — not the way I knew the few old-timers who had shared the field with me when the world and we were young.

However, Martin H. Greenberg told me severely that I could not do that. The Hugo Winners volumes, he said, were important items to the lore and history of the field and transcended my personal desires for ease and comfort, so I would have to continue… I looked him right in the eye and said, “All right, Marty. I’ll do it… But you’ll have to do it with me.”

I insisted, and here we are, together again — and we have a fair division of labor. I write the introduction. I write the headnotes. He does the work. It couldn’t be better.

Besides, he is twenty-one years younger than I am. If things go as they ought to go, he will be able to carry on these volumes after I have departed to the great word processor in the sky (it used to be a typewriter, as I recall). And he can train others, who can train others, so that for as long as Earth and the human species lasts, volumes of Hugo Winners will come out periodically.

Greenberg did not carry on the series, as a matter of fact. When Asimov died he passed the baton to Connie Willis and Gregory Benford, who produced the next two Hugo anthologies, before Baen discontinued them in the late 90s.

The New Hugo Winners, Volume I was published in hardcover by Wynwood Press in December, 1989, and reprinted in paperback with a new cover by Baen in 1991. Below you can have a look at the hardcover edition, with cover flaps.

As usual with the later Hugo volumes, there was grousing over what stories were overlooked in the voting — including David Brin’s classic novella “The Postman,” Bruce Sterling’s first Shaper/Mechanist tale “Swarm,” Greg Bear’s famous novella of alien warfare, “Hardfought,” William F. Wu’s “Wong’s Lost and Found Emporium,” Lucius Shepard’s “The Man Who Painted the Dragon Griaule,” and George Alec Effinger’s gonzo tale “The Aliens Who Knew, I Mean, Everything.”

The New Hugo Winners, Volume One

Wynwood Press published only the one volume. Asimov and Greenberg brought the series to Baen three years later for The New Hugo Winners, Volume II, and Baen remained the publisher for the next decade. 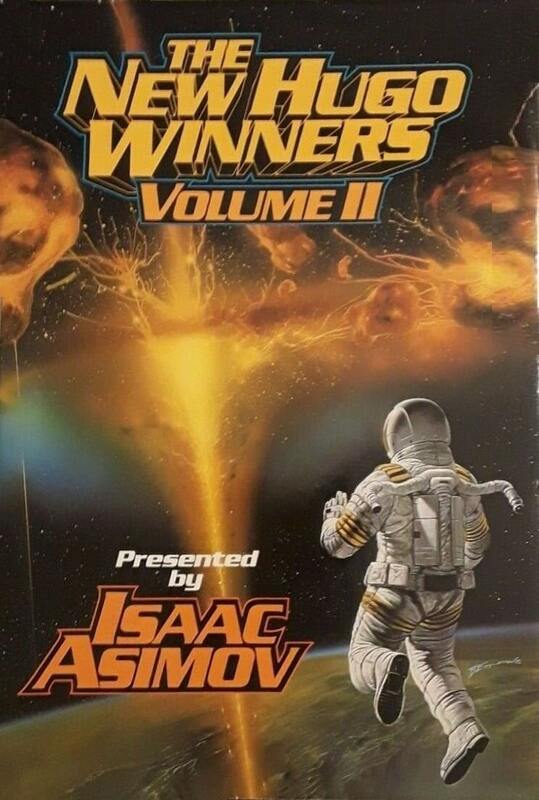 The series found new life as paperback originals at Baen. The New Hugo Winners, Volume II contained some truly excellent fiction, including one of my favorite stories of the 20th Century, “Why I Left Harry’s All-Night Hamburgers,” by Lawrence Watt-Evans, as well as several modern classics, including Roger Zelazny’s “24 Views of Mt. Fuji, by Hokusai,” Robert Silverberg’s “Gilgamesh in the Outback,” and Ursula K. Le Guin’s “Buffalo Gals, Won’t You Come Out Tonight.”

It also included an excerpt of Jerry Pournelle and S. M. Stirling’s novel The Children’s Hour, as a little Baen cross-promotion.

Here’s a look at the inside cover flaps for the hardcover edition of Volume II.

Asimov died of AIDS in April 1992, while he was preparing The Super Hugos with Marty Greenberg. It was published posthumously in September of that year,

Lots of folks questioned the rationale of a “Super Hugos” collection, which implied that some Hugos were greater than others. That’s the kind of thing we probably should be questioning.

But strictly from a promotional point it view, it made sense. The first five volumes of The Hugo Winners were long out of print by the early 90s, including the early bestsellers. A mass market paperback introducing new readers to the glory of the early Hugo winners was a great idea, and it certainly couldn’t hurt future sales. So maybe we squint a little bit at this book, but we understand why a publisher might be tempted.

Besides, it’s an absolutely stomping collection. Greenberg completed the book, and asked Charles Sheffield to write the introduction and story notes. While the selections were widely debated (as you’d expect), I think the editors made the right choices (mostly). Yes, there’s no excuse for not including “The Ones Who Walk Away from Omelas” by Ursula K. Le Guin, for example. But any Best-of-the-Hugos collection that includes George R.R. Martin’s “Sandkings,” “The Big Front Yard” by Clifford D. Simak, Harlan Ellison’s “Repent, Harlequin!” Said the Ticktockman,” and (of course!) “Flowers for Algernon” by Daniel Keyes is doing something right in my book.

The Super Hugos was “presented” by Isaac Asimov and edited by Martin H. Greenberg. Here’s the complete TOC.

There has been no new Hugo Winners anthology in the last 25 years, and one is long overdue.

Here’s the complete details on all four volumes of The New Hugo Winners, plus The Super Hugos.

All five books published in paperback by Baen, the last four as paperback originals. The first three were reprinted in hardcover by the SFBC, the last two have never had a hardcover edition. There are no digital editions.

Good collections. I know most of the stories. The exception would be ones by Timothy Zahn, Jerry Pournelle and Spider Robinson. Could have done without the Bicentennial Man by Asimov. The only story here that I don’t like.

I’m fond of “The Bicentennial Man,” though I admit a lot of my admiration for that story is tied up with my nostalgia for the I, ROBOT tales. I thought it made a very fitting capstone for that series.

I haven’t read THE NEW HUGO WINNERS cover to cover the way I read most of the earlier volumes, partially because I was reading the stories as they appeared in magazines at the time. But, like you, I have a few gaps! I should probably add these to my TBR pile.

i can’t imagine the amount of sci fi fans that were made just by using issax asimoc’s name on all the anthologies. i still love a good anthology and with Gardner Dozois passing, i dunno who’s go to name i should look for, maybe John Joseph Adams?

There was one further attempt at a Hugo anthology after the Baen books: The Hugo Award Showcase: 2010 Volume, edited by Mary Robinette Kowal. The book was, frankly, a disappointment because it didn’t even include the short story winner, Ted Chiang’s “Exhalation”. It continues to baffle me how the Hugo Awards can be considered the pinnacle of the field, and yet nobody wants an anthology of the winners.

I forgot all about that book! It was published by Sean Wallace’s Prime Books, in imitation of the popular Nebula Awards Showcase, focusing on one year (in this case 2008), and including both the winners and a selection of the nominees.

The Hugo winners that year were “The Erdmann Nexus” by Nancy Kress (novella), “Shoggoths In Bloom,” by Elizabeth Bear (novelette), and Ted Chiang’s “Exhalation” (short story, not included, doubtless for rights reasons.)

It seemed like a terrific idea, but it didn’t catch on, and Prime only did the one volume. Pity! 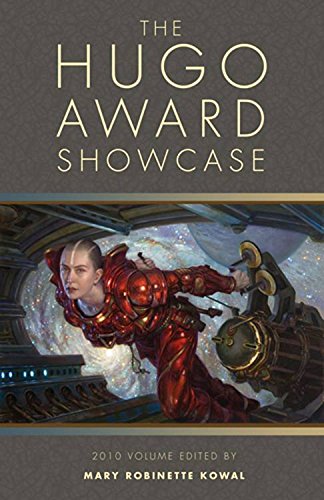 I don’t hold these volumes quite as high as I do the first three in the series. While there are fine stories in them (especially from Robinson, Varley, Zelazny and Watt-Evans), to me the linchpin in these volumes were Isaac Asimov’s introductions. In the first three volumes he had many personal reminiscences with the various authors. Even with a story I didn’t particularly care for (I’ve never been a big Harlan Ellison fan, for example), his stories about his interactions with the author was pure gold, and I could re-read those without reading the story.

The quote you have from Asimov is key: “I no longer knew, with any great intimacy, the flood of dazzling new writers who had entered the field and were garnering awards — not the way I knew the few old-timers who had shared the field with me when the world and we were young.” His not closely knowing the new authors, to me at least, shows in his introductions. While they are certainly competent, they lack that personal touch that’s present in the first three volumes. The informal, chatty style he had was what I always enjoyed, and it just wasn’t there anymore. While I have the two New Hugo Winner volumes (I never picked up the Super Hugos or the later volumes edited by Willis and Benford), I don’t revisit those as often as I do those first three volumes.

One last observation: it’s interesting how the source for the Hugo winners changed between the first and second New Hugo volumes. The first had mostly entries that were either from Analog or Asimov’s own SF magazine (with a lone entry from F&SF). The second volume has no stories from Analog, Asimov’s SF magazine is the dominant source, plus two each from F&SF and Omni, and one from Universe 15. The field for short fiction was slowly changing.