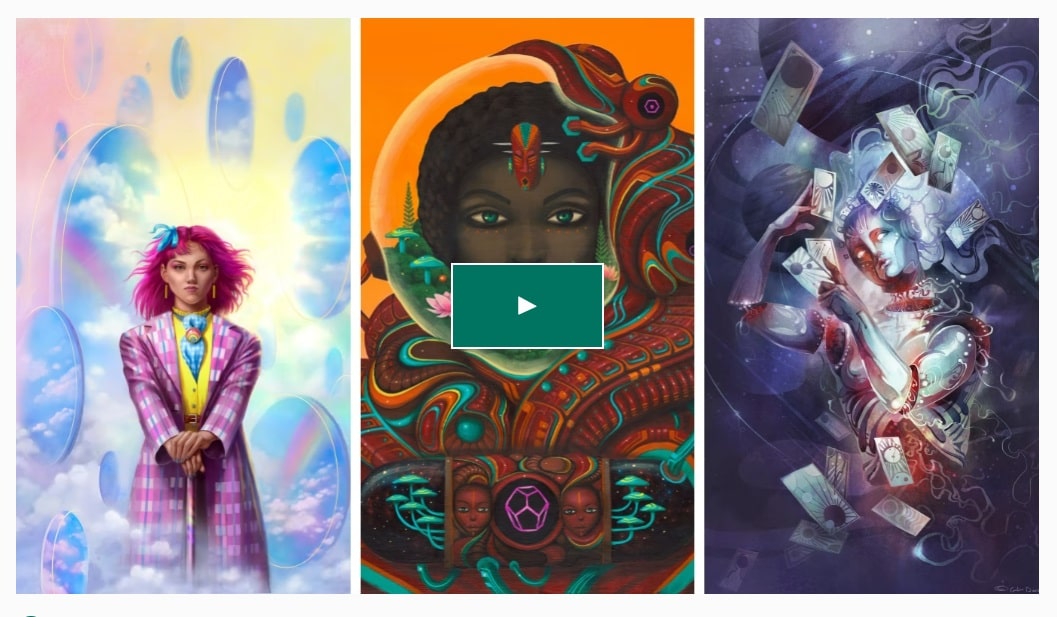 I have always loved stories that offer a glimpse of the future. Speculative fiction is a literature of ideas, and stories set in the future can explore an enormous range of possibilities — from dark chilling futures that serve as cautionary tales to bright futures that offer us much-needed glimmers of hope.

We here at Uncanny Magazine are in the middle of the Uncanny Magazine, Year 9: To Fifty… and Beyond! The upcoming year will bring our 50th issue, and while we are planning ahead for the future of the magazine… here’s a look at futures past! Uncanny stories, essays, poems, and cover art depicting the world of tomorrow… and beyond!

“It’s the right time for literature that reminds us that these emerging technologies are fraught and unequal, that the path we’re on will play out across real bodies suffering in the real world, and that the future is far from inevitable.”

– Lincoln Michel, The Future in the Flesh: Why Cyberpunk Can’t Forget the Body

Grim futures abound in speculative fiction, with authors often extrapolating from the flaws in our societal systems. As Michel discusses in the essay quoted above, these darker cautionary tales serve an important purpose, a wake-up call and more than that a call to action.

Authors have no shortage of flawed systems from which to extrapolate. In “You Perfect, Broken Thing,” C.L. Clark creates a future where people are in literal competition with each other for medical treatments. S.B. Divya’s “Contingency Plans for the Apocalypse” has characters asking the question, “Should we have stayed in this state?” Though the story only came out in 2018, some of its dystopian elements have already come to pass.

Sometimes we don’t want the future we find ourselves living in. Terese Mason Pierre’s poem “In Stock Images of the Future, Everything is White“ opens with the line “I don’t want flying cars. I want my language back.” Other times we cannot find ourselves in the future at all — essays by P. Djèlí Clark and Elsa Sjunneson both look at the question of who is included in fictional futures and who is erased. 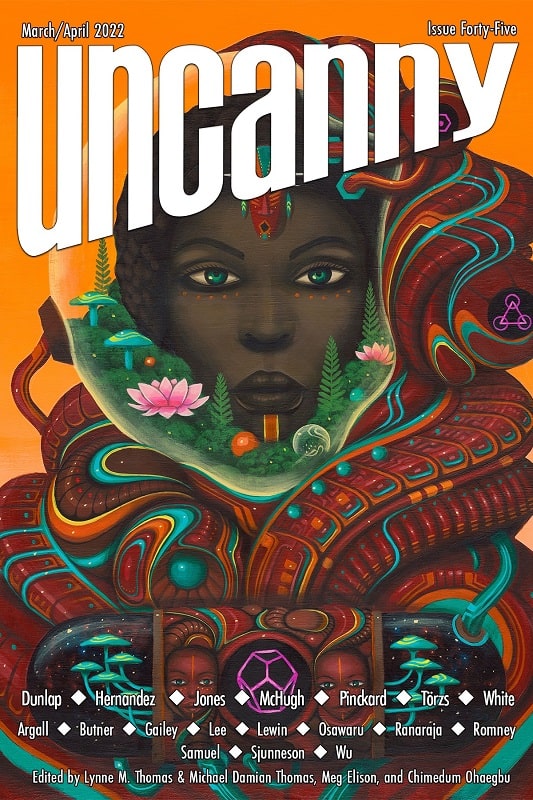 “Hopeful stories are still possible. We still need them. And we don’t have to — shouldn’t — limit our hopeful stories to other worlds or the far future. It takes work, but we can imagine optimistic stories that connect to our own, and give us the strength to keep living them.”

– Marissa Lingen, The Roots of Hope: Toward an Optimistic Near-Future SF in a Pandemic

Fictional futures can also offer us hope. Later in the essay quoted above, Lingen suggests that one strategy to find hope in an otherwise dark world is to tightly frame the story. Betsy Aoki’s “On a Branch Floating Down the River, a Wren Is Singing” is set in a post-nuclear dystopian world… where the protagonist faces an AI in a poetry competition. 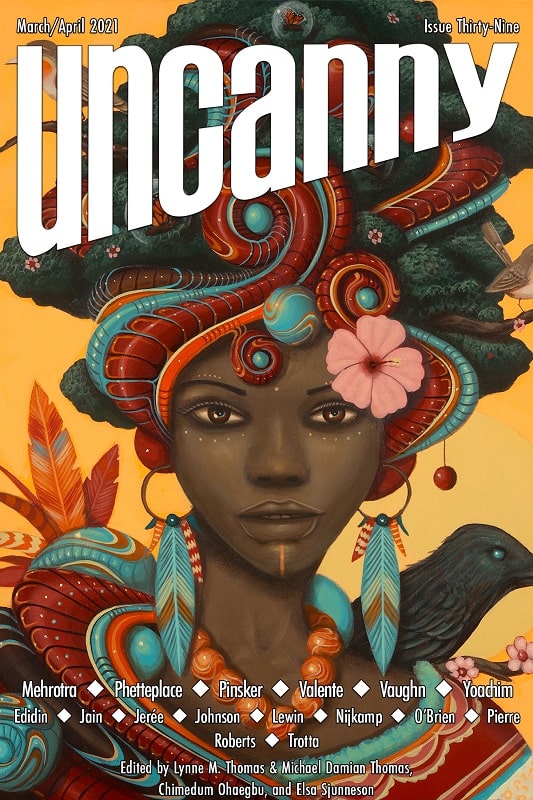 There are also stories that sweep across vast swaths of time, ending in hopeful futures. “The Migration Suite: A Study in C Sharp Minor” by Maurice Broaddus covers an enormous timescale to create a powerful story of struggle, resilience, and hope. Cover artist Paul Lewin also blends elements of past and future to create stunning art which he describes as representing “Ancient ancestors, futuristic ancestors, interdimensional ancestors, and all the other beings that inhabit the spirit world.” 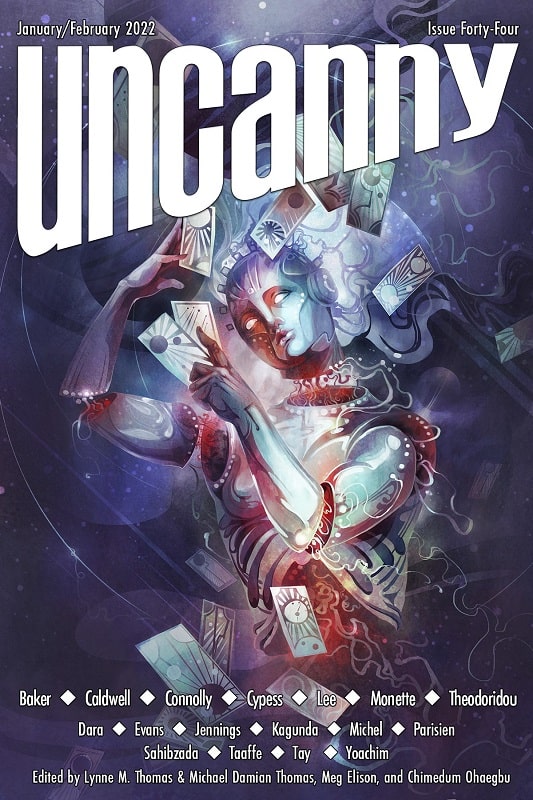 Uncanny Magazine has featured futures where AIs become our collaborators (“50 Things Every AI Working with Humans Should Know“ by Ken Liu) and futures where AIs instead decide to confiscate our llamas (“Confessions of a Spaceport AI” by Mary Soon Lee). In still other futures, we have the technology to reconnect with the people we’ve lost (“Proof by Induction” by José Pablo Iriarte).

Frequent Uncanny cover artist Galen Dara creates gorgeous and whimsical futures — robots with playing cards, and space travelers with unicorn tattoos. And sometimes, as in “Fandom for Robots” by Vina Jie-Min Prasad, the future brings us the heartwarming story of a robot who loves the show Hyperdimension Warp Record. 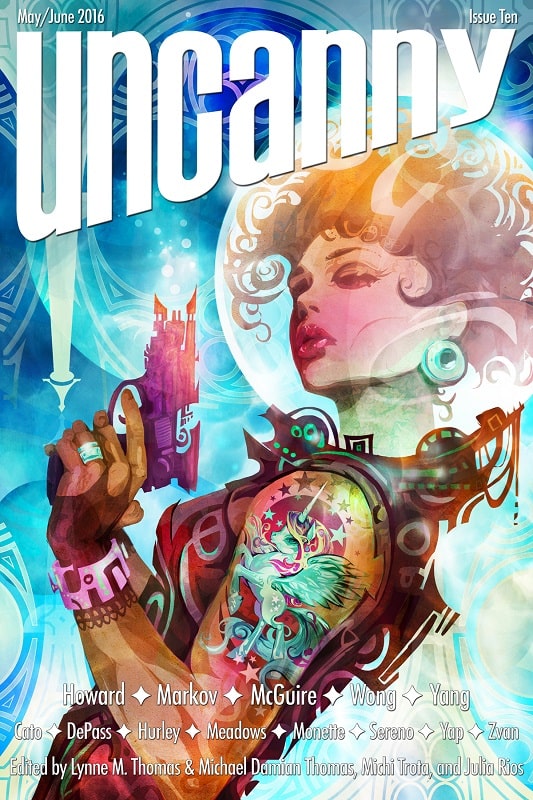 Those are a sampling of futures that have already appeared in Uncanny Magazine, but the future of the magazine will bring so much more! Help us showcase even more amazing futures by supporting the Kickstarter: Uncanny Magazine, Year 9: To Fifty… and Beyond!

Uncanny Magazine Interviewer Caroline M. Yoachim is a prolific author of short stories, appearing in Asimov’s, Fantasy & Science Fiction, Uncanny, Beneath Ceaseless Skies, Clarkesworld, and Lightspeed, among other places. She has been a finalist for the Hugo, World Fantasy, Locus, and multiple Nebula Awards, and her stories have been reprinted in multiple year’s best anthologies and translated into several languages. Yoachim’s debut short story collection, Seven Wonders of a Once and Future World & Other Stories, came out in 2016.

Those covers are gorgeous pieces of art! Is there a collection of them?

You can see all the past covers of Uncanny Magazine by scrolling through the back issues here: https://www.uncannymagazine.com/issues/

If you are looking for art prints or anything like that, your best bet is to get in touch with the individual cover artists.