With The Siren’s Song (just released), Weston continues The Cambion Journal series which promises to be a six-novella series. It tracks Augustus Thorne, a “Cambion” (a half-demon, half-human hybrid). He’s cursed with a terrible hunger he can barely control, hunting and exterminating any Incubi and Succubae he can find.

Check out the A Hybrid’s Tale review:

[The Cambion Journals] is “billed” as Occult Horror, but it’s much more than that. Weston skillfully blends and cross-breeds genres: supernatural horror and science fiction, fantasy and mythology, and a modern-day, action-packed thriller. It’s also a story of love and devotion, and something of a dark and sexy detective story, as well… If you like well-plotted, fast-paced thrillers with plenty of action, if you enjoy occult horror and the paranormal, and the other genres I mentioned earlier, you’ll enjoy this one.

And the second review from Joe Bonadonna:

This time around, in Call of the Cambion, Weston delves deeper into Augustus Thorne’s past, his relationships and his character. Born in 1760, Thorn has sworn to seek out and destroy the Demondim and its “department” of Incubi and Succubae assassins, known as the Forge, as he hunts for Fanon, the Incubus who sired him, then abandoned him and his mortal mother. Thorne is a complicated man: in spite of his supernatural and magical powers, and his killer’s instinct, he is an honorable and loyal man, not without mercy and his own code of ethics.

This releases this July (link)! Here is the cover blurb:

Having survived the double-cross planned by Asmodai, the demon king, and Fanon, his own spawn-father, Augustus Thorne is trying to come to terms with his lot in life. Both Fanon and Agamemnon, the king’s assassin, are dead. As are the embers of a burgeoning relationship. The only woman Augustus has ever dared to love has fled, driven from his side in fear of the danger being with him brings.

Unfortunately, he can’t dwell of what might have been. An insidious new threat has emerged, one that exposes humanity to unimaginable peril. Yet fate seems to lend a helping hand when Augustus stumbles upon a mysterious woman, someone who appears to be the only other Cambion he’s ever met. It’s only after they team up to fight the rising tide of terror together that things get complicated. 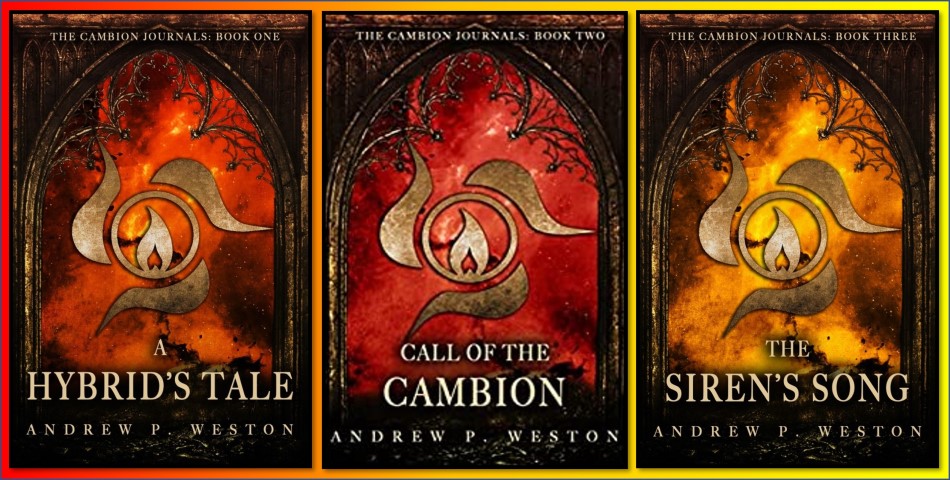 Andrew Weston is a bestselling author from the UK who now lives on the beautiful Greek island of Kos with a growing family of rescue animals. As the creator of the critically acclaimed IX Series, the Cambion Journals, and Hell Bound, Hell Hounds, and Hell Gate (novels forming part of the Heroes in Hell universe), Andrew has the privilege of being a member of the Science Fiction and Fantasy Writers Association, the British Science Fiction Association, and the British Fantasy Society. He also enjoys writing review articles for Amazing Stories and The Magazine of Fantasy & Science Fiction.

Thank you, guys. A wonderful write-up.
(And as always, a privilege to be mentioned in Black Gate Fantasy)
Much appreciated 🙂