“Cambion: the half-human offspring of the union between a human male and a Succubus, or a human female and an Incubus.”

A Hybrid’s Tale is the latest offering by Andrew P. Weston. It’s a short, fast-paced novel set in the realm of “demondim,” and is the first book in his new series, The Cambion Journals. It’s “billed” as Occult Horror, but it’s much more than that. Weston skillfully blends and cross-breeds genres: supernatural horror and science fiction, fantasy and mythology, and a modern-day, action-packed thriller. It’s also a story of love and devotion, and something of a dark and sexy detective story, as well. This is a twisted game of cat-and-mouse — a frantic hunt and chase spanning continents and other dimensions.

I waited in the shadows

And thus, the story of Augustus Thorne, begins.

Born a Cambion — a half-demon, half-human hybrid — and cursed by a terrible hunger he can barely control, Augustus Thorne spends his long and lonely life hunting and exterminating any Incubi and Succubae he can find; they’re demons, of course, psychic vampires gifted with near-immortality and extraordinary powers. But who and what Augustus is truly after is his father, Fanon, the Incubus who raped his mother, Rosemary, in the year 1759, and getting her pregnant. Rosemary was then ostracized by her family and her village. She was pregnant and unwed, and they considered her a whore. Augustus was born in 1760 — born without a heartbeat. But he was alive; a hybrid, a Cambion. Mother and son soon moved on, and she loved and protected him, nurtured and taught him to be human, and from her, he had the innocence all children possess. Weston paints Augustus in such a way that he is quite a likable human, a charming and persuasive bloke with a quick wit who can make the ladies swoon.

However, for all his inherent humanity, Augustus is still part demon. Succubae and Incubi feast on the souls, on the lust and on the desire of their victims. They feed and they kill — they have to kill. Augustus can sense the scent of an Incubus, as well as the histamines of the Succubae. And he, too, must feed on humans, but he does not kill: he is not a killer, and the unholy cravings he suffers and must satisfy scare him half to death. This conflict between his human and demonic halves is a cause of great consternation for Augustus, a true struggle between the two halves of his nature, and is the heart of this story. We see that his human-half is all important to him, due to the mother he so loved. His vendetta against his father is a highly personal one, for he wants nothing more than to avenge his mother for the nightly degradations Fanon made her suffer, and for what his paternal heritage turned him into. He comes across as a fairly nice guy, but when forced to defend himself, we witness the awesome, demonic powers he was born with: not only the powers of an Incubi, but with the added powers of a Cambion. Paranormal, supernatural powers. He is like no other living being.

Rosemary, Augustus’ mother, kept diaries of their lives, of her relationship with Fanon and all that she suffered at his hands. There is a wealth of history and information within the pages of her diaries, and guided by her written memories, Augustus pursues Fanon down through the centuries and around the world, driven by the need to avenge his mother, to destroy Fanon for what he did to her. He also wants revenge for himself, for Fanon made him what he is — a hybrid of demon and human, and then later abandoned Augustus and his mother. (I know, I have already stated this fact.) But as the hunt goes on for his father, Augustus soon realizes that things are not as they appear, and the revelations he uncovers are mind-boggling. For if he wishes to confront his father, he must first learn more about his own unique heritage, and the awful circumstances that led to his creation. Not only does Augustus seek vengeance against his father, he has also sworn to hunt down and destroy any Incubus and Succubus he can find. The trouble is, doing so might just cost him his humanity, which is the one thing that sets him apart from the rest of Demondim.

Augustus soon discovers that there are others searching for his father, namely, the Forge: Succubae and Incubi assassins who hunt Fanon for their own personal and political reasons. Early on in the story, when Augustus picks up his father’s trail, he encounters a gang of Forge assassins and this leads to a wonderful battle royale. Now we learn more of the powers that not only Augustus wields, but the powers the Succubae and Incubi have at their command: flying in hyper-time; ESP, skirring, which is teleportation, only much faster; phase-shifting, where they can hide objects in hyperspace; and the ability to heal themselves, to name a few. Question is, will Augustus and the Forge become enemies or will they join forces and become allies? There is more to Augustus and his Cambion heritage than he knows. There are hints of what he is and why the Forge becomes interested in him, but these secrets and so much more aren’t revealed in this first volume of The Cambion Journals, and Weston ends this volume on a cliff-hanging note.

Written mostly in 1st person, as narrated by Augustus, this is a story of Demons and Fallen Angels. Weston’s prose is smooth, crisp and quick-moving. His dialogue is witty and informative, his characters solid and real. We get a great sense of Augustus’ personality, attitude and sense of humor, as well as entry into his thoughts and emotions. And during his quest he meets and seduces Colleen, a stunning and highly-sexual flight attendant, with whom he makes a deeper connection. If love is in the air for Augustus, Weston is not telling us. And in my mind, I’m thinking that Colleen may be more than she seems, something Augustus does not even suspect. But whether or not my hunch is right remains to be seen.

There is one paragraph that caught my attention early on and still lingers in my mind, where Weston describes in simple, poetic imagery, the beauty of falling rain:

Caught in the moment, Fanon watched, entranced, as a thousand fingernails drummed against his windowpane, staccato heralds to the aqueous procession now threading its way down the glass toward a sill already beaded in translucent pearls.

If you like well-plotted, fast-paced thrillers with plenty of action, if you enjoy occult horror and the paranormal, and the other genres I mentioned earlier, I think you’ll enjoy this one.

Besides A Hybrid’s Tale, Andrew P. Weston is the author of a number of novels, including Hell Bound, Hell Hounds, and Hell Gate (all reviewed here at Black Gate, so check out those links), which are set in the Heroes in Hell™ shared-universe series. 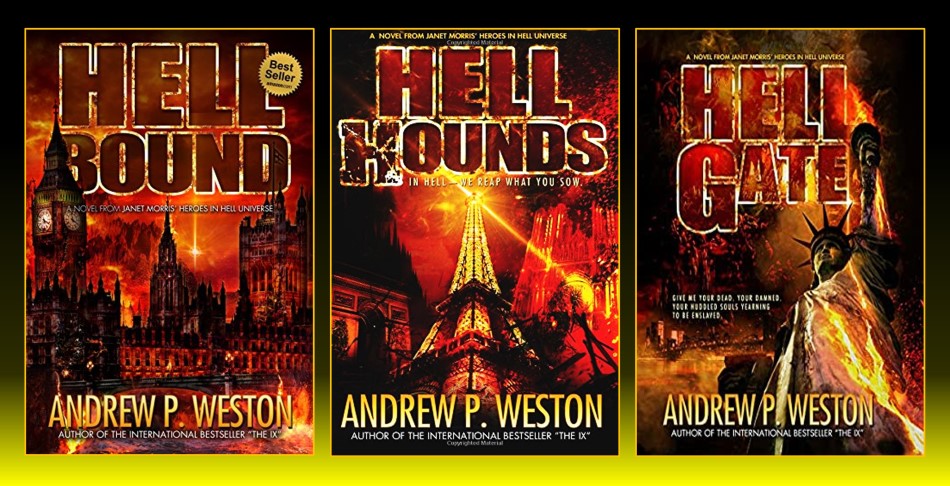 Joe Bonadonna is the author of the heroic fantasies Mad Shadows — Book One: The Weird Tales of Dorgo the Dowser (winner of the 2017 Golden Book Readers’ Choice Award for Fantasy); Mad Shadows — Book Two: The Order of the Serpent; the space opera Three Against The Stars and its sequel, the sword and planet space adventure, The MechMen of Canis-9; and the sword & sorcery pirate novel, Waters of Darkness, in collaboration with David C. Smith. With co-writer Erika M Szabo, he penned Three Ghosts in a Black Pumpkin (winner of the 2017 Golden Books Judge’s Choice Award for Children’s Fantasy), and its sequel, The Power of the Sapphire Wand.

He also has stories appearing in: Azieran: Artifacts and Relics; Savage Realms Monthly (March 2022); Griots 2: Sisters of the Spear; Heroika I: Dragon Eaters; Poets in Hell; Doctors in Hell; Pirates in Hell; Lovers in Hell; Mystics in Hell; and the forthcoming Liars in Hell; Sinbad: The New Voyages, Volume 4; Unbreakable Ink; the shared-world anthology Sha’Daa: Toys, in collaboration with author Shebat Legion; and with David C. Smith for the shared-universe anthology, The Lost Empire of Sol.

In addition to his fiction, Joe has written numerous articles, book reviews and author interviews for Black Gate online magazine.

Joe – and all the team at Blackgate – thank you so much for the wonderful review and supporting my work. This has to be one of the best ever platforms for everyting speculative, and I really do appreciate the boost appearing here gives my work. All the very best,
Andy

On behalf of myself and all the Orcs behind the Black Gate – you’re very welcome.