And just to clarify, though by this time my Dad was already allowing me to sneak out of bed to watch classic horror movies with him if I promised not to tell Mom, he felt Lugosi and Karloff movies were cinema art – in no way associated with the tawdry, colorful pulp underworld of the horror comic. One was groundbreaking filmmaking at its best, and the other would rot my brain and corrupt my soul.

This, of course, caused me to love both for the rest of my life, though for very different reasons.

Which is why, to this day, I always feel a little rush of adrenaline when I hear about a new horror comic like I did last week when my favorite Asylum Press released art for their latest blood thirsty collection of “pre-code” vampire tales. If you’re not familiar with the term “pre-code” as it pertains to comics whose stories and art harken back to the unregulated era from the late 40s to the early 50s before much of the industry was forced to self-censor with the Comics Code Authority, meant to protect the innocence of children. 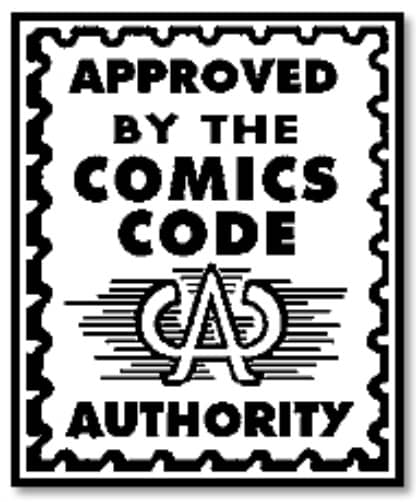 The CCA was an actual thing that was still around into 2011. However, it was revised a number of times during 1971 to allow for, among other things, the sometimes “sympathetic depiction of criminal behavior” and the “suggestion but not portrayal of seduction.” Also newly allowed, and to my benefit, were “vampires, ghouls and werewolves.”

Vampires #1, available in your local comic shop on June 29th, contains rarely seen blood sucker classics from the gory Golden Age of comics, highlighting the art of Lou Cameron, Dick Beck and George Klein, and featuring the classic tales: “Vampire’s Bite,” “One Door from Disaster,” and “Vampire Castle.” Frankly, this looks exactly like the horror comics I remember, and I could not be more excited.

I’ll be reading this one around midnight, by flashlight, under a blanket.

the comics code ruined so much, i get trying to protect young readers, but when we had msters of comics storytelling in the EC classics be it horror crime romance, and for them to get silenced by a code like the comics code is a damn shame. those creators aged out eventually and we didnt get the gold we SHOULD have gotten from them. that realy pisses me off. probly irrationally, but people like Al Williamson, John Severin Jack Davis etc were stifled. now i know there were magazine size stuff, and thank god for the first 4 years of heavy metal magazine for showing me corben, moebius etc, but man did those creative juices kind of just stop when the code destroyed the horror and crime comics of the time.

Dante, I absolutely loved Heavy Metal too. The code was voluntary, I wonder why it was adhered to so widely?

Grocery stores/drug stores/dime stores (which was where comics were sold – this was long before comic book stores and the direct market) wouldn’t stock comics that didn’t carry the code seal.

The lens of nostalgia makes everything beautiful, doesn’t it? Glasses off though, most pre-code horror was really, really bad.

Who am I to talk, though? Tonight I’m going to relax to an episode of The Love Boat. The horror! The horror!

haha, nothing wrong with Love Boat though i preferred Fantasy Island in that timeframe.

You are all my people…

“those creators aged out”? What does that even mean? Anyway, many writers and artists of those horror comics found work in the emerging superhero titles from Marvel and DC.

Chas, I think he means they retired/died/etc…

It’s blasphemy to say so, but the best of EC wasn’t in the horror comics, it was in the war titles edited (and often written and drawn) by Harvey Kurtzman. The top EC horror artists – Jack Davis, Graham Ingles, and Johnny Craig – were terrific, but there was a big fall-off in the secondary artists, and the stories were often crudely heavy-handed and repetitious. I remember when my twelve-year-old son read through my beautiful hardcover Tales from the Crypt books, and handed them back to me saying, “it’s the same story over and over, isn’t it?”