The Year’s Best Horror Stories: Series IX was the ninth volume in DAW’s Year’s Best Horror Stories, copyrighted and printed in 1981. This was the second volume edited by horror author and editor Karl Edward Wagner (1945–1994). Michael Whelan’s (1950–) artwork appears for a seventh time in a row on the cover. I continue to be very impressed with Whelan’s artistic diversity of subject and mood. Though the scenes depicted almost never have anything to do with the contents, they are highly evocative and truly draw you to the book.

As with Wagner’s previous volume, all of the authors of The Year’s Best Horror Stories: Series IX were male. Six were American, four were British. Wagner included four stories from professional magazines, three from books (one collection, two anthologies), and three came from professional fanzines. This volume holds the fewest number of stories we have yet seen for a DAW’s Year’s Best, because more than one of the stories here was close to novella length. We continue to see some returning names: Stephen King, Ramsey Campbell, Dennis Etchison, T. E. D. Klein and Harlan Ellison. But there are several first-timers as well.

This was an excellent horror anthology. One of the things I find interesting about this series is the number of stories I do not think of as horror. Rarely are they so different that I do not find at least some family resemblance with my horror story ideal. But even the stories in DAW’s Year’s Best that I don’t think of as particularly horrific are still uniformly good. I will highlight some from of the best of these from The Year’s Best Horror Stories: Series IX here.

“The Cats of Pere LaChaise” by Neil Olonoff is more like a revenge tale, something you’d find on Tales From the Crypt. A cemetery in Paris seems to have a lot of stray cats. But it is a mystery why they all seem to look so well-fed. The mystery is solved by the end. Not particularly scary but a good story.

“The Propert Bequest” by Basil Smith is an M. R. James-style mystery. The supposed supernatural entity was puzzling, but I was drawn in nonetheless. So much so that I immediately went to eBay to get a copy of Smith’s collection The Scallion Stone. I had never heard of this author but he is clearly an excellent writer in the James tradition.

I’ve read Stephen King’s “The Monkey” before. The story focuses on an evil toy monkey — remember those cymbal-clanging stuffed chimps? There are several things here that do not really make sense. Isn’t there any other way of destroying a toy monkey, other than dropping it in a deep water? And the characters often act like typical, irrational, horror movie victims. But regardless, King does an excellent job ratcheting up the terror, and drawing you into the horror.

“The Catacomb” by Peter Shilston is a creepy tale. It is about an American tourist whose Italian tour bus finds itself stuck in an out-of-the-way village. The village is a strange one. Though it is daytime and during the week, none of the villagers are seen, nor are their shops open. In addition, the tourist does not understand why the village doesn’t advertise its local cathedral, which is clearly fairly impressive and would easily attract tourists. The bus has about an hour before it gets back to its usual route. We overhear the driver commenting that the group “can’t come to much harm if they’re all together” (p. 134). Despite this suggestion, the tourist sets out on a lone jaunt to check out that cathedral.

Finding an open side door, he discovers the cathedral is as impressive inside as out. The mosaics within are some of the best cathedral art the tourist has ever seen. But then he begins to note something odd about the biblical scenes.

It became noticeable that, though the artist had great natural vigor, it was the portrayal of evil which called forth the finest efforts. The serpent in the Garden of Eden, for instance, was given a human face that bore a sinister and seductive leer. In the story of Cain and Abel, there was no doubt that it was Cain who was intended as the hero; for Abel as he lay helpless on the ground was a mere hapless simpleton, whereas the murderer, standing over him with a spade raised to cleave his skull, was full of savage power (p. 137).

The artwork becomes more and more disturbing until the tourist finally realizes, “This is a blasphemous church . . . . The mosaics may be very fine, but they are also very horrible” (p. 139). The tension continues to build as the tourist realizes that the way he came in is now locked and he feels a pull to go down into the catacomb. I’ll leave my synopsis hanging there. But I found the ending very rewarding.

I think T. E. D. Klein (1947–) is one of the finest contemporary horror authors alive. Unfortunately, his output is incredibly meager, the majority of it from the 1970s. But those dozen or so stories are some of the most terrifying in the genre. “Black Man with a Horn” appears in The Year’s Best Horror Stories: Series IX and has been anthologized a number of times since. I have probably read this story more than any other of his. It first appeared in Arkham House’s 1980 New Tales of the Cthulhu Mythos, edited by Ramsey Campbell, which is still one of the finest Lovecraftian anthologies ever assembled. This is its first appearance elsewhere. 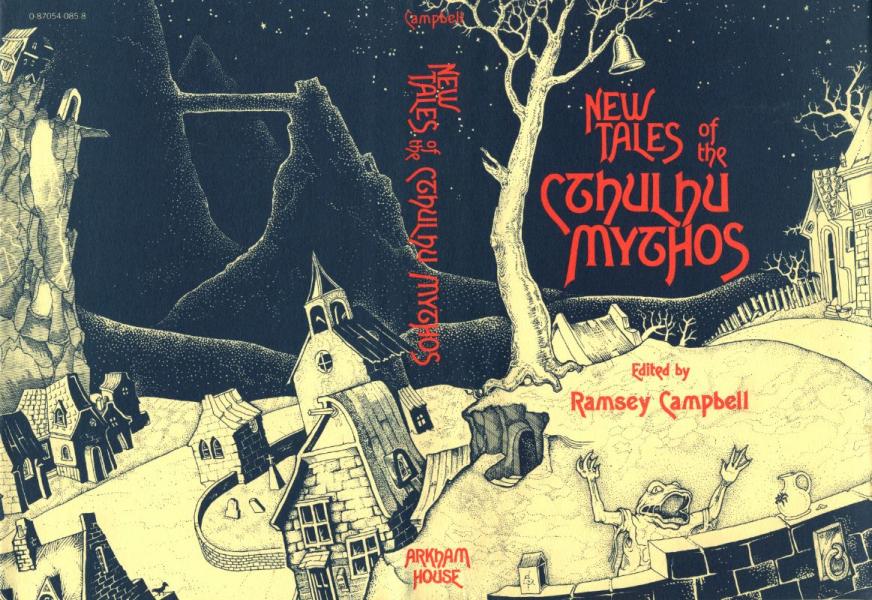 “Black Man with a Horn” focuses on an unnamed aging horror author who was part of the original Lovecraft circle. Klein has confirmed in interviews that the protagonist is actually based on Frank Belknap Long (1901–1994), though of course it is a completely fictional tale.

Klein skillfully interweaves cosmic horror into very believable contemporary situations. Here the main character finds himself seemingly in the middle of a real horror story, and seeks to find out what’s going on. He surmises that a recent series of disappearances and murders is tied to a Malaysian myth about a creature called Shoo Goron, which in ancient artwork looks like a black figure with a horn.

Interestingly, the Shoo Goron never appears firsthand in the tale. But the hints of it throughout are some of the most terrifying and suggestive things I have ever read. One of my favorite scenes in “Black Man with a Horn” (indeed, one of my favorite scenes in all horror literature) is when the protagonist finds the transcript of an old Malay film. The following scene is between an American interviewer and a Malay boy. He reads the following:

INT:    This Malay youth has sketched a picture of a demon he calls Shoo Goron.(To Boy) I wonder if you can tell me something about the instrument he’s blowing out of. It looks like the Jewish shofar, or ram’s horn. (Again to Boy) That’s all right. No need to be frightened.

I agree with S. T. Joshi’s comment that this “is one of the most shuddersome moments in modern weird fiction — rarely have two words packed such a concentrated dose of loathsome implication.” (The Modern Weird Tale, McFarland [2001], 109). If you’ve never read this story, treat yourself and track it down.

Wagner’s excellent judgment continues to shine through in his selections for DAW’s Year’s Best. I highly recommend this volume. It is perhaps the best yet in the series. Here’s the complete Table of Contents for The Year’s Best Horror Stories: Series IX:

Along with the sentences that just drip horror in “Black Man with a Horn”, the line that also sticks with me is the protagonist musing on the revival of genre horror and the upswing in literary appreciation of its principal writer: “Howard, your triumph was complete the moment your name became an adjective.”

Yeah, that’s a great line too.

Wagner. Wagner. Some guy was just telling me about him at dinner last night…

You should listen to that guy. He sounds pretty wise.