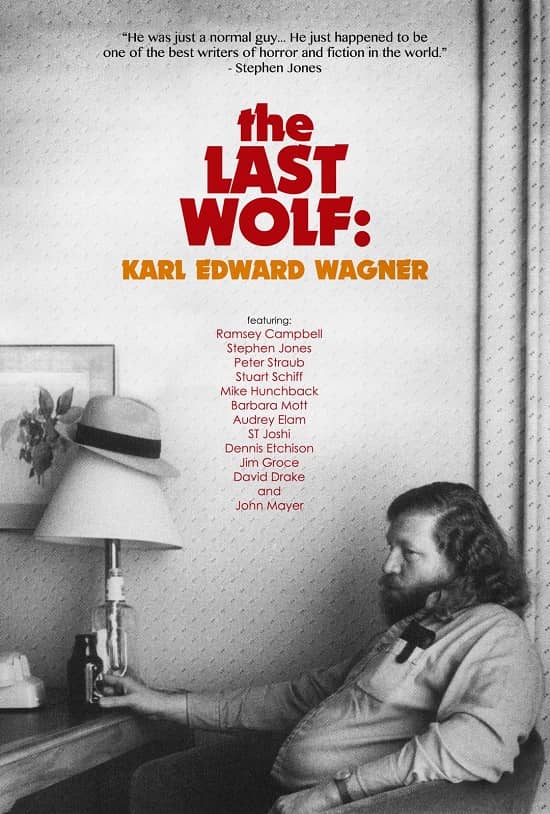 Documentaries seem to be sort of a thing right now. And they can be absolutely fascinating when the subject is something you’re into. The ones I most enjoy tend to be about my favorite bands, albums, or movies. But I especially like documentaries about my favorite authors, particularly when those authors are on the verge of being forgotten.

At Black Gate we often bemoan the neglect, or approaching neglect, of authors and works in the “speculative” field (broadly conceived). But that lament should be doubled when it comes to the late writer Karl Edward Wagner (1945–1994). Wagner was one of the greatest writers of horror and weird fantasy, in my humble opinion. And though he disavowed the term, I think he was also one of the greatest exemplar writers of sword and sorcery. (Wagner preferred the term “Gothic fantasy” to describe his own work.) 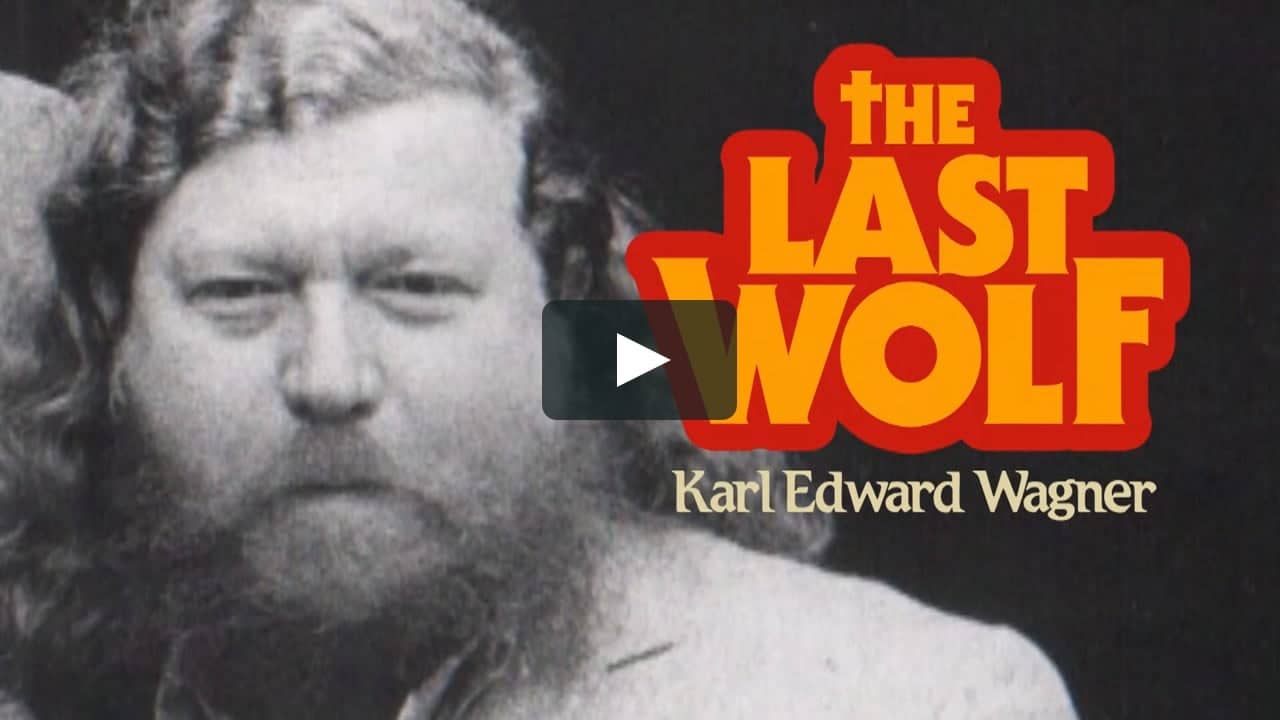 As its brief description says, The Last Wolf “seeks to shed a light on this dark muse through interviews with his family, his friends, and his fellow creators.” And it does just that.

The Last Wolf includes interviews with horror luminaries that knew Wager such as the writers Peter Straub, Ramsey Campbell, Dennis Etchison, and David Drake, as well as Stuart Schiff, the creator and editor of the fabled Whispers fanzine, and also acclaimed horror editor Stephen Jones. In addition, there are interviews with members of Wagner’s family, close friends, former schoolmates, and even Wagner’s former wife of twelve years, Barbara (now) Mott, who provide a plethora of details from Wagner’s life. 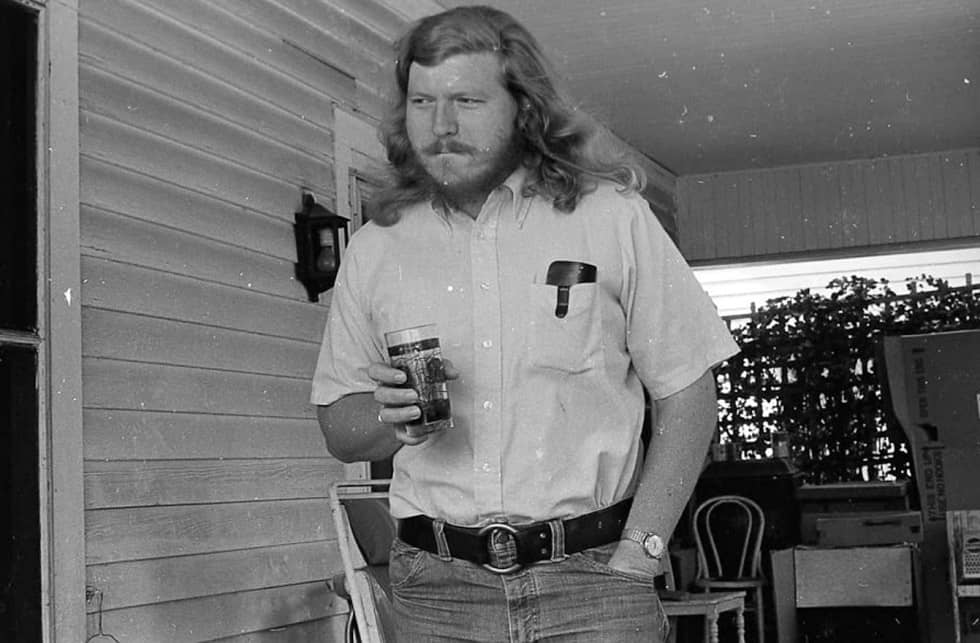 One of the most interesting people interviewed in The Last Wolf was Wagner’s best friend of many years, the writer John Mayer, who was also the first artist to ever portray Wagner’s famous character Kane. Mayer is quite a character. With an interesting voice, and an eye patch to boot, he seems like the perfect Wagner sidekick. In all seriousness, Mayer had a wealth of information regarding Wagner’s early life and work that was simply invaluable for any Wagner fan.

In addition, The Last Wolf also provides a surplus of never seen before pictures and old home-movie clips. Overall, the documentary does an excellent job of giving a sense of Karl Edward Wagner’s whole life, from growing up in “50s middle America” Knoxville, Tennessee, being a rebellious teenager, partying at “Toad Hall” (try tracking down that Wagner reference), as well as what it was like to be an aspiring writer in the horror and weird fantasy scene in the late 1960s, 70s and 80s, when Wagner grew to his authorial and editing heights.

For example, The Last Wolf portrays just how important the old Weird Tales author Manley Wade Wellman (1903–1986) was in those days. I’ve always loved Wellman stories. I consider him still one of the greats — another writer that should not be forgotten. But I had no idea that he was considered such a giant by other horror and weird writers later in his life. You get the sense from Straub, Drake, Wagner’s ex-wife Barbara, and others that Wellman held a sort of “writers’ court” in Chapel Hill, with a cadre of aspiring writers hanging on his every word, following his writing advice to a tee. And Wagner and his wife Barbara were basically the Wellmans’ adopted children. 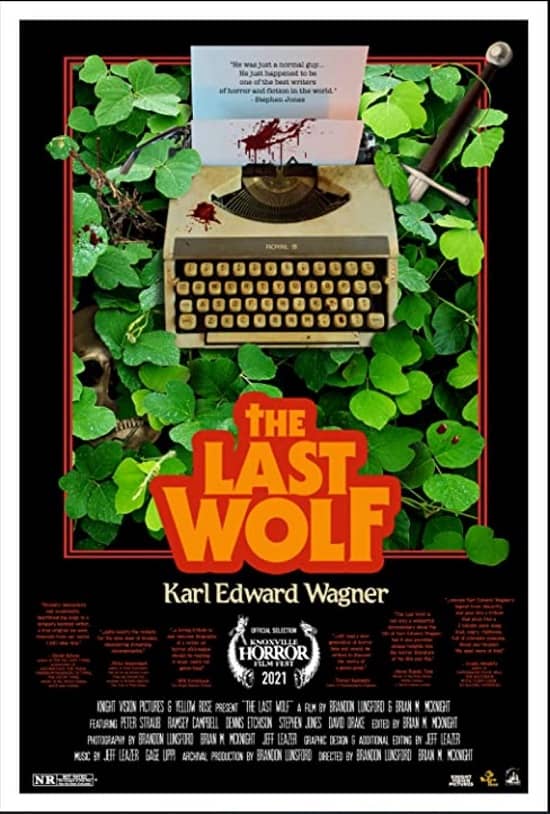 One of the details that emphasizes Wellman’s importance to Wagner is the fact that Wagner attended the University of North Carolina, Chapel Hill, and received a doctorate in psychology before becoming a full-time writer. Several interviewees strongly suggested, or even outright affirmed, that the reason Wagner went to UNC was to get into the local orbit of Manley Wade Wellman.

Stephen Jones relates that hanging out at the Wellman house could sometimes be “just magical.” Wagner’s ex-wife Barbara even shared some of Wellman’s funny sayings: Whenever someone got hurt on a football game on television, Wellman would always say, “I hope it’s nothing trivial.” What an amazing and creative environment Wagner must have gotten exposed to!

The Last Wolf also does a good job introducing Wagner and his works, especially his Kane stories, to new devotees. I read most, if not all, of the Kane stories before watching The Last Wolf. But this documentary helpfully filled out some details, including some of Kane’s evolution. 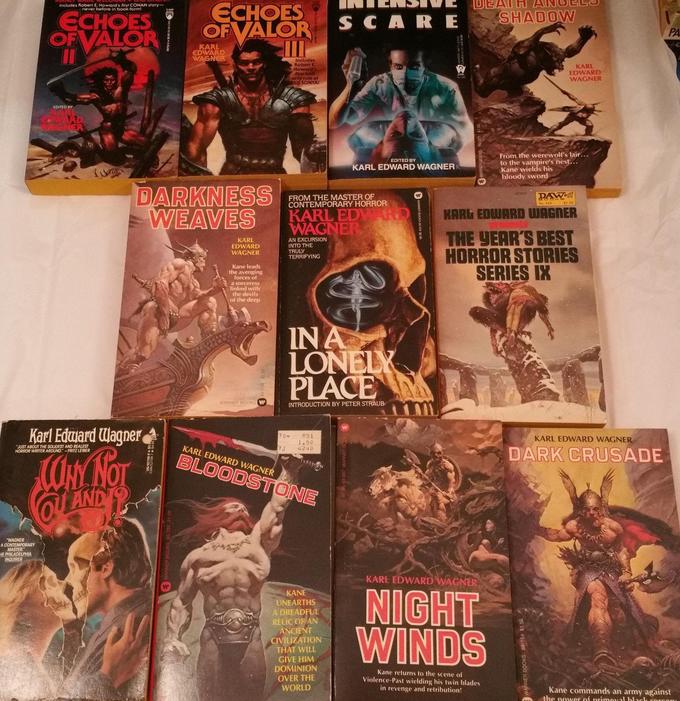 The Last Wolf also highlights the most frustrating issue about Wagner’s legacy right now, which is how hard it is to find most of his work, or to find affordable versions. Many of Wagner’s Kane paperbacks and horror anthologies go for big bucks on eBay and in used book outlets. And though some publishers such as Centipede Press have reissued some Wagner works, they have been very high-priced.

I think The Last Wolf may help to address this issue. For example, Valancourt Books recently announced they are reissuing Wagner’s horror anthology In a Lonely Place. Maybe The Last Wolf helped to make that happen. Hopefully we’ll see some more reissues in the near future. And if so, I think it will be due in large part to The Last Wolf putting Wagner back on the map.

The complete Chronicles of Kane, published by Centipede Press

Lunsford and McKnight don’t simply hail Wagner in The Last Wolf though. They address Wagner’s downward spiral later in life head-on, and particularly his heavy drinking, drug use, and failure to write, even when he had received advance payments from publishers. It’s sad to see Wagner’s friends and family relate the final years of Wagner’s life. All seemed to see it coming but they all seemed unable to do anything about it.

Wagner seemed to be an outright rebel to the end. Peter Straub says it best: He notes that Wagner evidently “had this fraudulent public life, and it’s deeply, deeply unhappy, and I’m sorry that his life should’ve taken that direction because he was a sweet, generous, smart guy. He just got undone by his own bad habits.”

Brandon Lunsford and Brian McKnight have done a superb job in giving us a documentary on the life and works of Karl Edward Wagner, emphasizing his importance and helping to keep his memory and works alive. Wagner’s works should not be forgotten.

I highly recommend The Last Wolf: Karl Edward Wagner; it’s enormously entertaining and informative. It can currently be streamed online at Vimeo for $2.99, or purchased very reasonably for $5.99.

Thanks for this. Definitely a To Be Watched for me, although I know it’ll drive toward a sad ending.

Karl Edward Wagner is one of the great tragic figures of 20th Century fantasy. I have no direct knowledge of his death, but people who knew him personally talked candidly about how he drank himself to death.

Jeff, the overall tone of the documentary is appreciative and focuses highlighting his legacy more than his downfall. I’ve watched it several times now. I never walk away from it feeling bummed.

i have only read the Kane stuff, and i love those, so i would love it if a lot more of his work was re=published. i need to check this out, thank you for the write-up!

I reprinted Wagner’s story “The Dark Muse” in the very first issue of Black Gate. I consider it one of the greatest (if not THE greatest) S&S story ever written.

I didn’t know that! I wish I had been aware of Blackgate in the print days of it.

Valancourt Books is going to reprint his In a Lonely Place collection.

I grabbed those Centipede Kane editions as soon as they came out, to replace my tattered paperbacks. Some writers get better with time – KEW is definitely one of them.

Preordered them the instant I heard they were forthcoming!

Centipede has indicated in a newsletter that the might reissue them.

Great article! Thanks for that , even though it makes me feel old and nostalgic….

FWIW, most of the Kane stories (pretty much the exact contents of the Warner paperbacks, plus the Donald M. Grant Book of Kane) are available as eBooks, so the only things you end up missing are the later, mostly modern-set stories, the novel fragment, and some early drafts &c. included in the Centipede editions.

You’re right. I should have highlighted that in my article. Unfortunately, many of us are saps here at BG are ineluctably hard copy enthusiasts. But it still is a great boon to have the electronic texts available.

I remember first reading Mr. Wagner’s horror fiction (“Where the Summer Ends”) in Kirby McCauley’s magnificent anthology Dark Forces, which pretty much broke open the 1980s horror boom for me. (And which contains a Manley Wade Wellman story of John the Balladeer, too.)

The first Kane story that I recall was “Two Suns Setting”, in World Fantasy Awards, Volume 2, which impressed me for telling a tale in which the title character, Kane, is not the focus of the story and is even sidelined in the clash between the last giant and the last sabre-tooth. Pretty impressive for an author to hold to the logic of his narrative even above pushing his hero for the reader’s admiration.

“Two Suns Setting” is such a great story. Good call out.

I love Dark Forces! I reread it a few years ago for the first time since the 1980s and it held up very well indeed. I didn’t realize it at the time, but it would’ve been my first introduction to Wagner, Wellman and Gene Wolfe, amongst others. And the Mathesons’ story Where There’s a Will is a nasty little classic.

Stephen Jones’ intro to Where the Summer Ends is pretty representative of how most people remember Karl Edward Wagner – that his somewhat uncouth appearance was at odds with what he was actually like (in this respect Wagner was very like his famous creation, if sadly lacking Kane’s iron constitution) plus Jones’ account of Wagner’s decline tallies pretty closely with Straub’s – it’s sobering(?) that both the photographs for this article picture Wagner with some sort of drink in hand.

That said, Kane will always be the last bone fide S&S hero as far as I’m concerned. There was Conan, Corum et al. And then there was Kane.

I can’t argue with that claim. Thanks for the comments.

I love Karl Edward Wagner’s Kane and despite the significant cost I have Centipede Press’ hardcover editions on my shelf. No publisher today will publish anything like it, and that’s a shame.

I loved his idea of a character who was both Elric of Melniboné and Conan the Barbarian at the same time.

I think you nailed the character’s essential appeal, Dave. Kane is immortal, supernaturally strong, devious, but (like Elric) unlucky. Otherwise we might find him a lot less sympathetic than we do.

AFAIK,I have all of Wagner’s fiction, having grabbed some of it before it became expensive. I would love to get inexpensive reading copies of it.

This is a great documentary. I need to rewatch it.

I think a series HBO or Netflix would be better than a movie but that is just me.

Someone online very emphatically pointed out that I made the mistake of claiming Wagner earned a PhD in psychology. Evidently, this is incorrect. Wagner instead earned an MD. Let the record stand corrected.

And does anyone else have the problem of wanting to pronounce his surname as “Vahg-ner”, ala the opera chap? “Wag-ner” just sounds too ‘light’ for a person of his dark talents.

Thank you for such a wonderful review!

Glad to do it Brian!