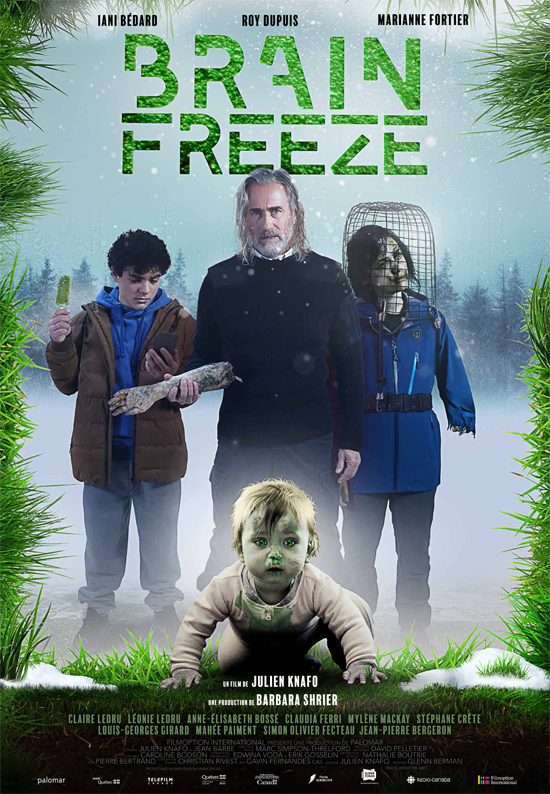 The official opening film of Fantasia 2021 was Brain Freeze, a Québecois zombie movie which played at Montreal’s Cinéma Impérial, a classic movie palace dating back to 1913. For a variety of reasons I wasn’t able to attend, but the film streamed on Fantasia’s servers on August 9, and that showing I decided to check out.

Bundled with the feature was a short, “No Title.” The 9-minute animated film’s written and directed by Alexandra Myotte, and it’s about a UFO chaser in 1990 who goes to a small town in Québec following reports of an alien abduction. He finds a blind sculptress, and an unexpected story. This is an extremely well-made movie, with a sharply written and performed voice-over from the always-faceless UFOlogist (Jean-Sébastien Hamel, also the sound designer), and excellent 2D animation that finds very strong images and brings out some of the cosmic implications of the tale. It’s also got some very down-to-earth themes, about art and love, and a killer line about revenge at the end. Add to that, it ties into some actual local history in the town of Saint-Amable, and nicely evokes the pre-internet feel of 30 years ago. It’s a very good piece, clever, distinctive, and funny.

Then came Brain Freeze, directed by Julien Knafo, who co-wrote with Jean Barbe. Near a major Québec city there’s a small island suburb where the ultra-rich are scheming to use chemicals to grow grass in the middle of the winter so they can play golf year-round. The good news for them is that they’re about to succeed. The bad news is that there will be side effects, in the form of zombies.

The first part of the movie introduces us to our main cast, setting things up to pay off later. Once the zombies begin to overrun the suburb, the bridge leading to the island is walled off and we follow a young teen (Iani Bédard) and a veteran survivalist private security officer (Roy Dupuis, long-time star of the Québec film industry) as they struggle to survive. Both of them have issues with family members become zombies — the film boasts both a momzie and, briefly, a zombaby — and form an unlikely friendship as they struggle to stay alive. Utimately, there’s some significance in where salvation comes from, and where betrayal lies.

Overall, it has fairly standard plot and thematic ideas for a zombie movie. It moves swiftly and does what you want, more or less as you want it. There aren’t any really large-scale set-pieces, but there are some solid small-scale fight scenes and a few clever twists on what you can do with a zombie. And just as you might expect, the zombie invasion becomes a way to meditate on social bonds and humanity’s inhumanity. It’s not any more detailed than you’d want to have in a fast-paced action movie, but it’s enough to give the action some meaning. 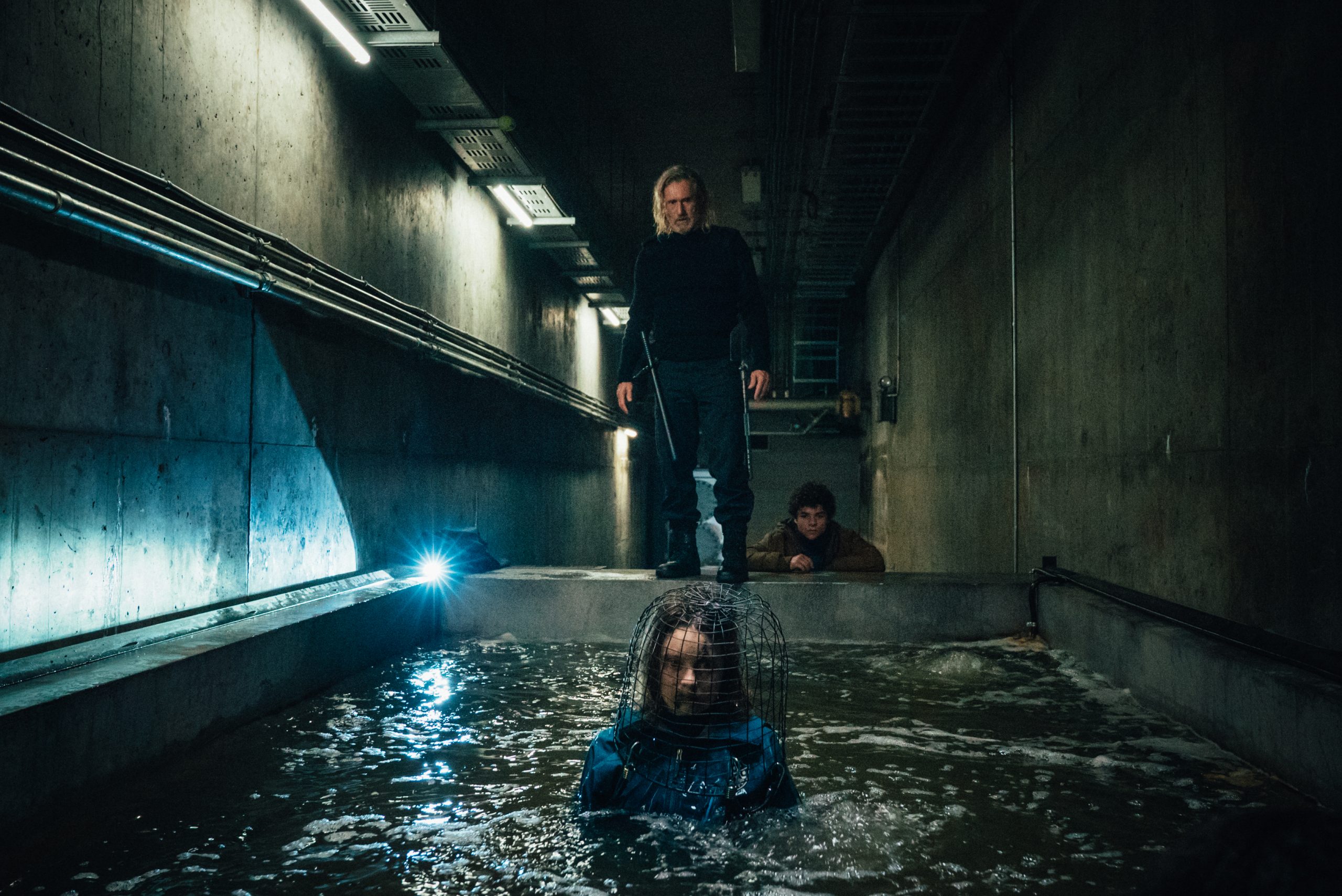 As zombie movies go, this one tends more toward action with dark comedy rather than horror. There isn’t much gore to speak of — there’s more in the way of suspense and tension, and those scenes are pretty clearly set up rather than sprung unexpectedly on the viewer in the middle of a quiet moment. Which is to say the movie’s relatively family-friendly.

I’ll note that the film did an interesting job speaking to certain issues in Québec without being overly specific. Viewers don’t have to know any particular political context — to the contrary, as a Québecer I was a bit thrown by what seemed a hand-waved blurring of federal-provincial jurisdiction in the use of troops near the end of the movie. But the film understands how to use a villainous xenophobic radio host as a sinister figure, a kind of monstrosity that works as a contrast to the zombies. The commentary of the demagogue gives an interesting texture to the movie’s take on class politics — beyond the rich being heedlessly destructive, you see how other malevolent forces will try to use justified anger at the power structure. 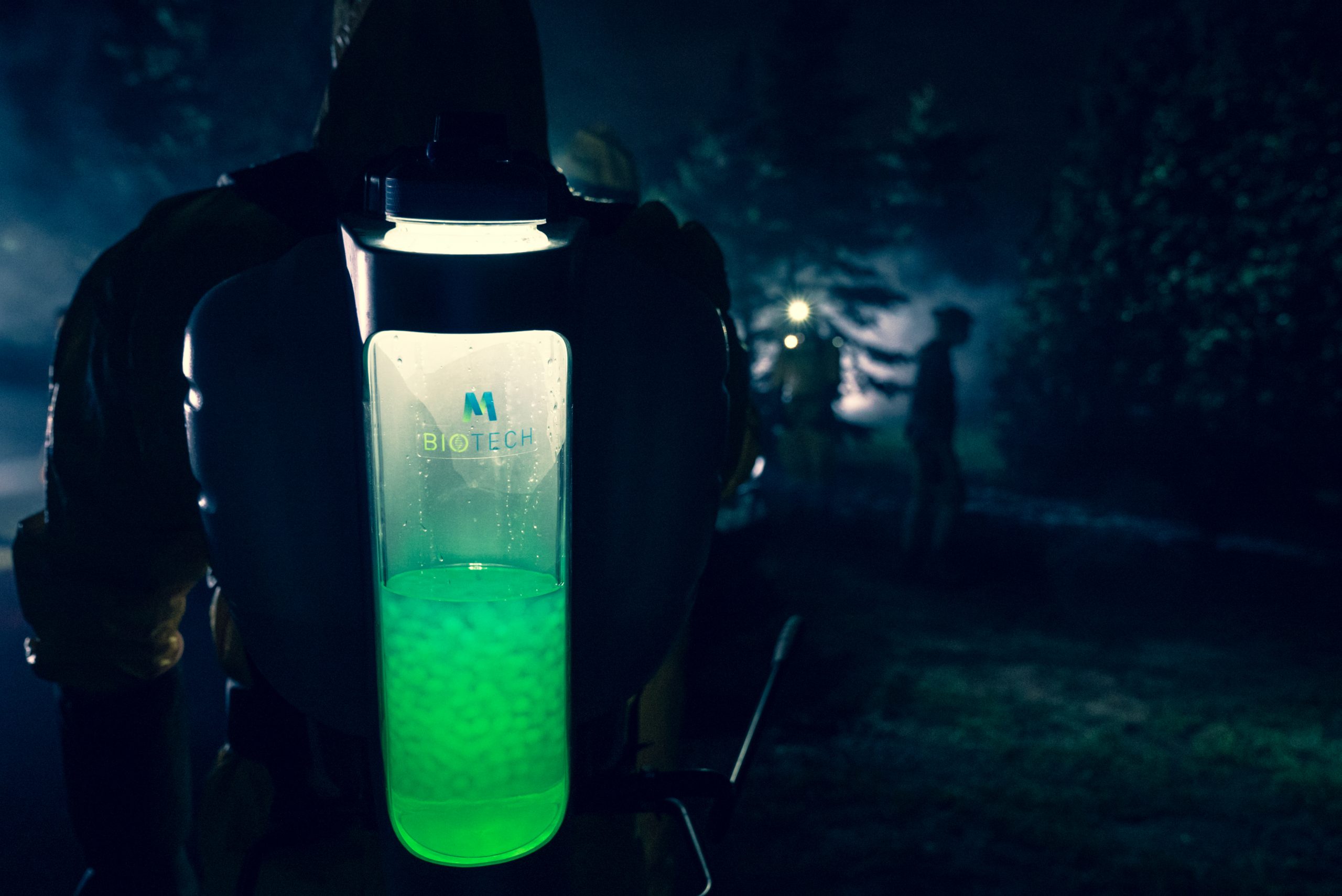 This is a movie in which zombies emerge due to the actions of the rich, and specifically due to the actions of rich people willing to mess with the environment so they can have the kind of leaisure entertainment they want. That is, the rich don’t want to have to suffer through winter like the rest of us; they don’t want to be bound by their environment; they don’t want to have to put up with the nature of the place in which they live. Thus the suburb, with its mcmansions and undistinguished suburban spaces. And thus when the rich face the consequences of their actions in the form of the walking dead, they’re baffled: “Do they want to unionise?” they wonder, dredging up presumably the most fearful possibility they can think of.

In fact things can always get worse than we can imagine. So it is here. There isn’t really a complex mythology behind the zombies, but there’s certainly a nice poetic justice behind the zombies being created by a formula designed to keep grass viable at temperatures below freezing. How can zombies, who have no body heat, move around in a Québec winter without freezing? Because the zombie-making molecule is specifically meant to keep life going at subzero temperatures. Beyond practical attention to detail, that’s irony: the attempt to meddle with the environment is what makes the zombie attack dangerous. 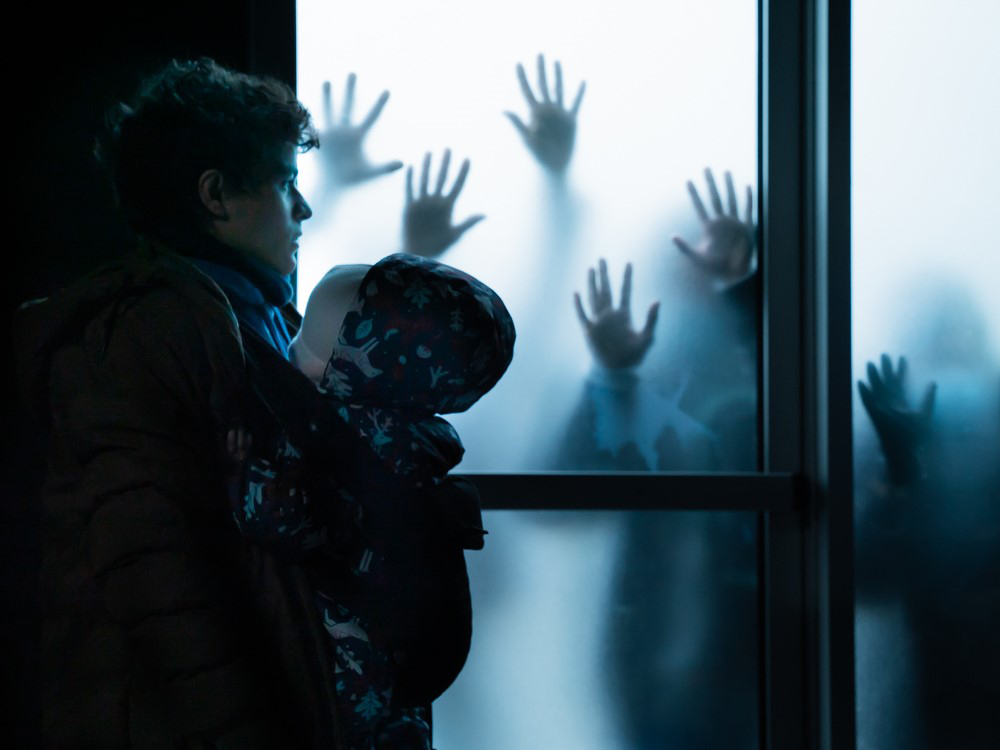 Still, there’s not too much to the film beyond that. The action bits and the comedy bits and the social commentary bits are all present, but don’t have much to say to each other. So each element is individually effective, but doen’t really cohere in a complex way. It also leads to a weak climax, where it feels as though the main characters have lost agency — as though you’re watching a video game cutscene play out rather than scenes in a movie with stakes for characters in which you’re invested. It’s also true, as you might expect, that the characters don’t really process grief and shock in a believable way. That’s mostly to the good; this isn’t a movie interested in exploring the truly dark corners of the psyche, and extended scenes of characters struggling with trauma are not needed. Usually the movie is good at maintaining a certain tone, mixing the credible and the cartoonish. But there is a certain sense of unreality, which by the end of the movie makes it difficult to feel invested.

Note that this is not the fault of the performers or of the craft in the film. The acting’s certainly as effective as it needs to be. The locations have the sheen that means wealth in the twenty-first century, and the movie’s always visually interesting, with some effective camera moves and good staging for fights with hunger-maddened zombies. I would not call this a bad movie, just one that’s maybe not as memorable as it could have been. It’s a good solid zombie movie with a few clever notions. It’s not essential viewing by any stretch, but if this sort of thing is the sort of thing you happen to be in the mood to watch, it’ll do its job.