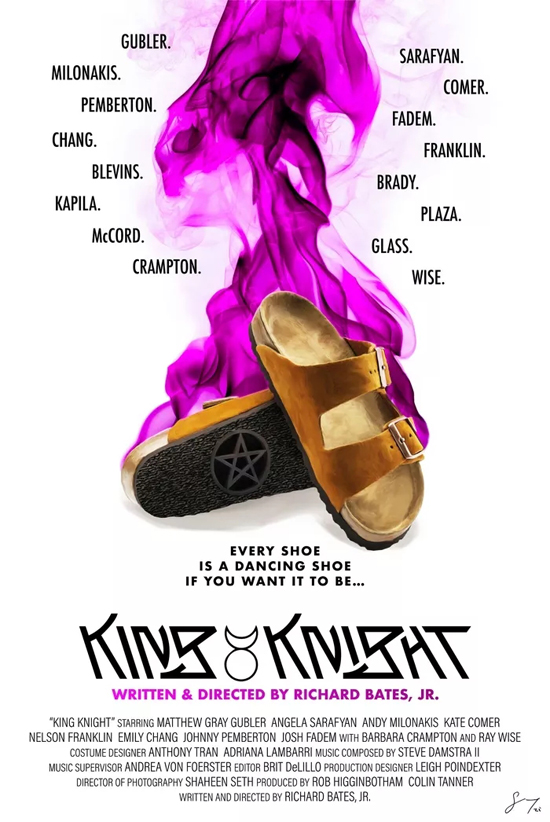 “M*therfucker” (asterisk in the official title, so far as I can tell) is a 13-minute short written by Adam Peterson, who co-directed with Adam Long. The entire thing takes place in a bar, where Brian (Nick Burr) is meeting his old friend Tony (Tyson Sullivan). Tony’s got a secret, which will turn Brian’s life upside down. Indeed, it already has, several times over. This is a science-fiction story in the form of two guys talking, the dialogue quick and snappy and well-handled by the actors. The performances are in fact the highlight of the film, which is worth watching for them alone. The science-fictional idea at the core isn’t handled clearly enough to really bring out the themes effectively — Brian’s faced with a decision to make, but the nature of the choice isn’t established well. There’s something in here about the way in which trying to fix things can make things worse, but I couldn’t see why the relatively amoral character with the power to fix things is bothering to do so. There’s some clever bits of dialogue, and entertaining acting, but the movie’s ultimately incoherent.

The feature that the Fantasia Film Festival bundled with the short was King Knight. It’s a comedy written and directed by Richard Bates, Jr., and concerns a Wiccan coven in California. I was a little worried going in that it’d spend time mocking the religion, but that didn’t really happen to my eye. Instead, the movie presents a very gentle character-based humour based around themes of community and conforming, and learning not to care about fitting in if it means suppressing one’s individuality.

There’s a fairy-tale–style voice-over intro that introduces us to the coven, and in particular its leaders, the life partners Thorn (Matthew Gray Gubler) and Willow (Angela Sarafyan). They’re good mentors and counsellors for the group, and we see them provide wise words to the couples who make up their coven. But then a secret from Thorn’s past comes to light: far from an outcast in high school, he was in fact the class president and voted Most Likely to Succeed. And now his 20-year high school reunion’s coming up.

When the truth comes out, his coven casts him out for lying to them. Thorn embarks on a kind of vision quest that will take him to his reunion, a journey enlivened by a bottle of water he doesn’t know is spiked with ayahuasca. Before he’s done he’ll encounter determined park rangers, talking rocks, and everybody’s favourite wizard (Ray Wise, perhaps surprisingly not playing Alan Moore but rather Merlin).

The structure’s solid enough, if not always original. The drug-trip conceit leads to psychedelic visions that work because they speak to Thorn’s character beyond being a series of gags, and that’s effectively the way the movie as a whole works — it gets jokes out of character, while using the humour to set up or advance other elements of the plot. If that overall plot’s not too surprising, still a lot of smaller things are introduced and developed and pay off unexpectedly.

The characters in the coven and indeed the film in general are very broad, but not exactly stereotypes. It’s not that they feel like real people, so much as that they don’t feel like any particular cartoon. They all have their particular obsessions, but each also has something charming about them. The movie’s sympathetic to virtually everyone, while also letting them be oddballs in their way and letting them have their flaws. 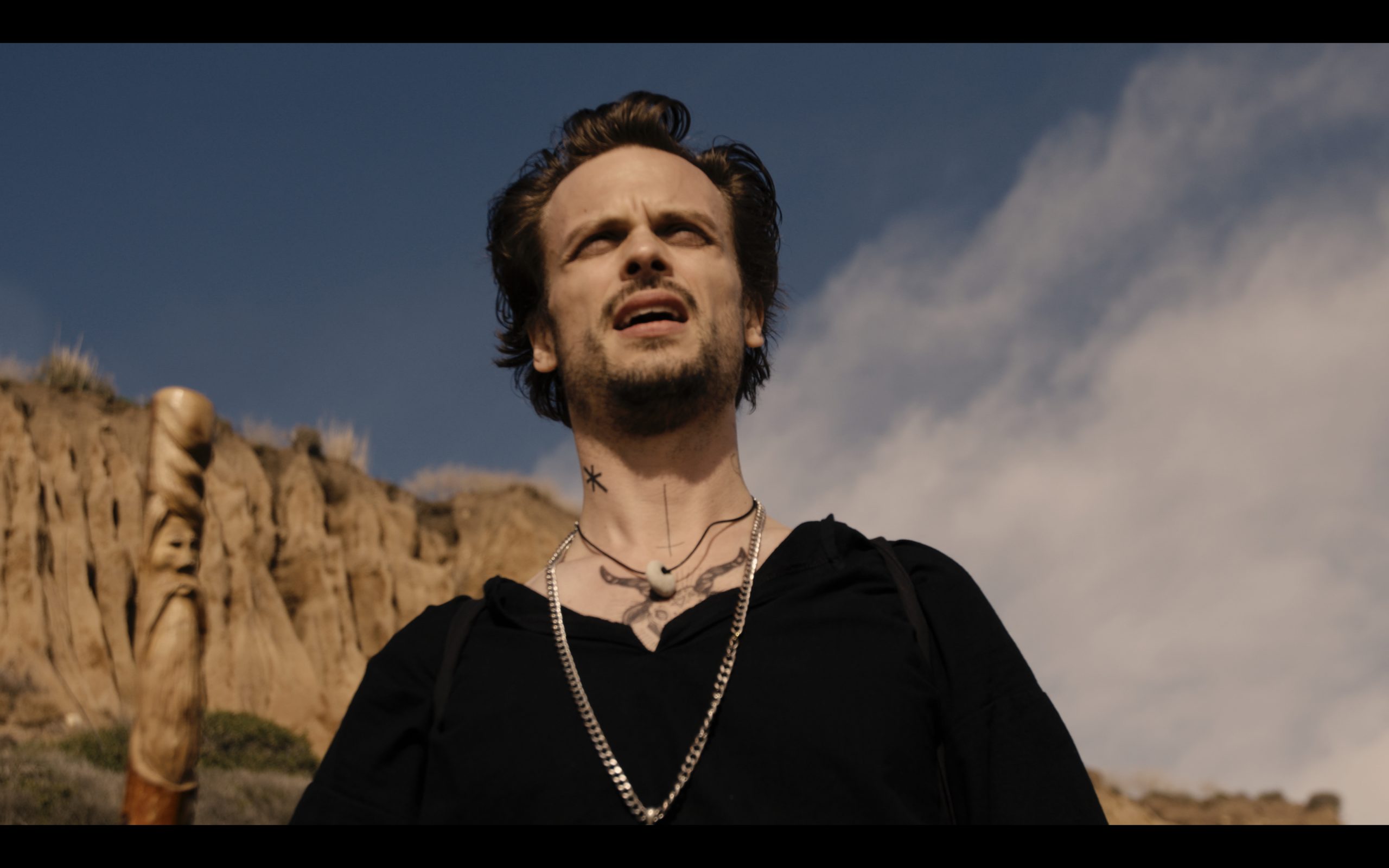 In particular, the movie lets them be intelligent. Thorn and Willow in particular are even allowed to be wise — human, with blind spots, and moments of irrational emotional reactions, but overall wise. That’s a relatively unusual thing for the lead characters in a comedy; it’s easier to play up foolishness for the sake of cheap gags. King Knight takes a more difficult and more rewarding path, in which characters speak to each other as rational adults and still end up saying and doing funny things.

These are characters who feel like they have a history with each other, who have relationships based on mutual friendship and respect, and who are still clearly cartoony characters in an outright comedy. It’s difficult to capture that comedy by quoting a gag; most of it’s based on the performers’ delivery and on a strong sense of the rhythm of a scene. I’d go so far as to say that the most clearly gag-oriented lines are least effective. The movie works because a lot of it’s played with a straight face.

Maybe because of all this, the movie’s able to talk seriously about serious things and still be funny. Some of that’s because the serious things are, in the grand scheme of things, not that earth-shattering. This is a movie about a man deciding to go to his high school reunion. That’s the premise of any number of sitcom episodes, but King Knight brings out the importance of this choice to its main character. And it does something more: high school life becomes a meaningful thematic contrast to the coven. 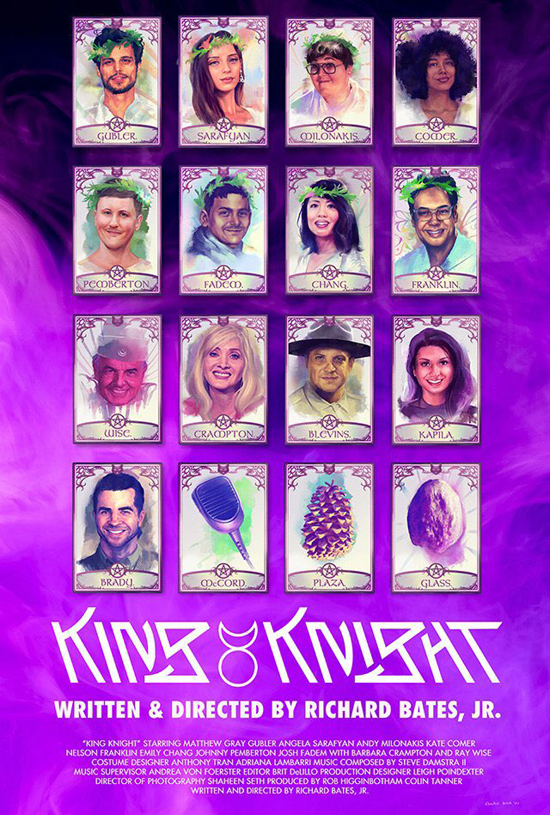 Both high school and coven offer or offered Thorn a place. Both have their rituals and conventions; in both cases his leadership position comes with responsibilities (not great responsibilities, but then he doesn’t exactly have great power, either). But while there are real differences between the two societies, they’re also not necessarily all that different, as the ending makes clear. People are people.

Still, it’s always clear that Thorn’s high school life is his past life, and it’s a life not just of conventions but conventionality — which is why he chose to leave it behind. It’s not that he entered into Wicca because all Wiccans are necessarily outsiders (indeed they are not, as one of the coven acerbically points out), but one thing the story immediately establishes is how much Thorn and Willow have internalised an image of themselves as pariahs from regular society. They are harassed for their religion, but the more the movie goes on the more you get the sense that Wicca is almost incidental to this part of who they are — that for whatever reason they are people who would rather build a society of their own rather than conform to everybody else’s idea of what’s normal.

But then, what happens when you build a community and then it develops a sense of what’s normal? Do you conform to that, or move on again? The film’s in favour of being true to oneself and being open, which sounds simple and obvious but which here provides enough drama to keep 81 minutes moving lightly. The point, I think, is that the right community is the one in which you’re free to be yourself, and in which you being yourself naturally enriches the people around you.

Again, nothing earth-shattering, but enough to hang a movie on. This is a very gentle comedy, and while it doesn’t have rapid-fire gags it does have a very pleasant feel and a relatively low-stakes story that’s still meaningful. There’s a sense in which the plot structure exists to give the character-oriented dialogue scenes a chance to happen. The plot organises the material, and lets character emerge; it’s not so much that character shapes plot, so much as character makes famimliar scenarios memorable. Which is a solid accomplishment for a movie, especially one which also catches a warm-yet-knowing atmosphere and works overtime to give everybody happy endings. King Knight’s a solid bit of business.