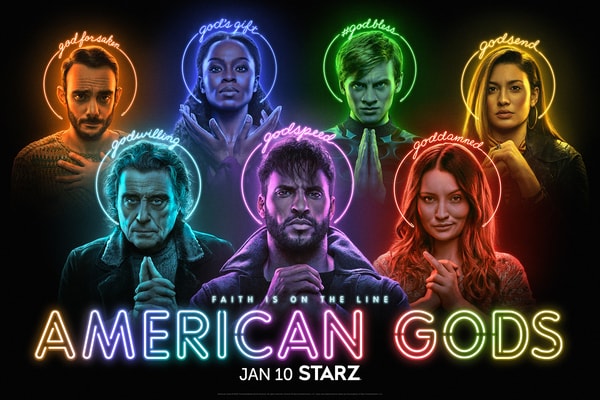 Like most of you, I read and enjoyed Neil Gaiman’s American Gods, so I was happy to see it get the premium specialty TV treatment, although I didn’t have the time or the right subscriptions to watch it until this year. I just binged all three seasons, and it’s a gem. It has a few flaws, the most major being its pacing, which might be why Starz dropped it after season three, but even these three seasons are a work of art. 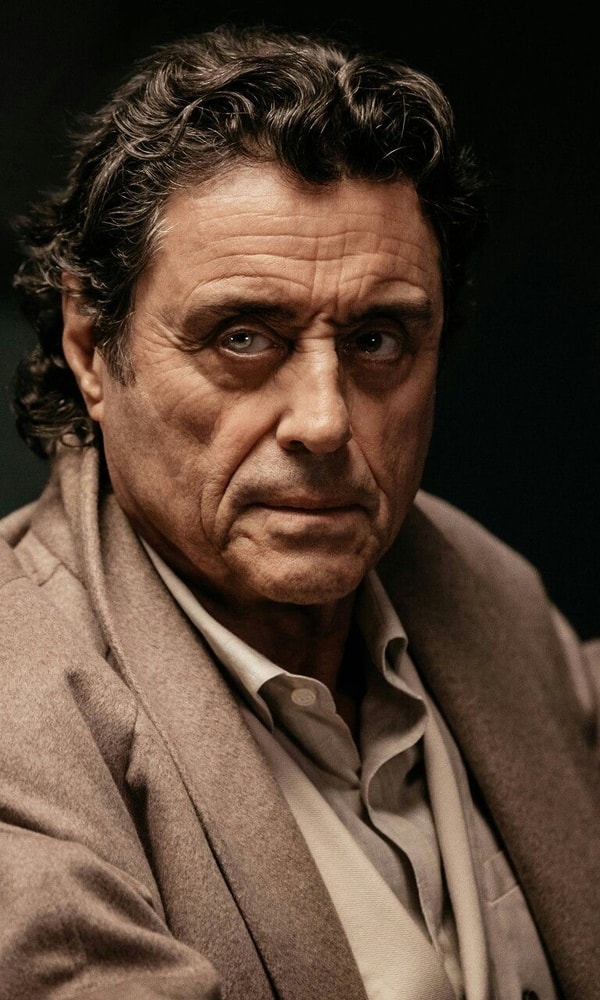 The story, of course, follows Shadow Moon (played by Ricky Whittle) who is released early from prison because his wife, while cheating with his best friend, was killed in a car crash. This up-ends Shadow’s life, leaving him open to be recruited by the mysterious and persistent Mr. Wednesday (played by Ian McShane). Wednesday is apparently a not-all-there conman, but his enemies are real enough and the struggle between the Old Gods and the New Gods unfolds faithfully with respect to the novel.

The major departures of the series are not that they change the story of the novel, but explore subplots. My favorite of these was Laura Moon (played by Emily Browning), Shadow’s dead wife, who powered by the Mad Sweeney’s (played by Pablo Shreiber) leprechaun coin, is a really tough revenant. In the book, she had some creepy moments with Shadow (gimme a kiss, honey), and the occasional rescue of Shadow, but here, her deadness is explored fully. 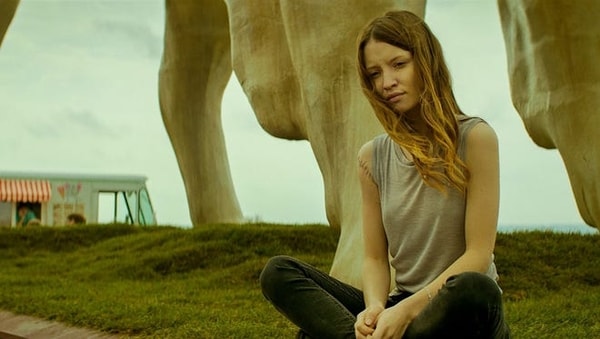 She goes home, and confronts her crappy life, with flashbacks to the choices she made that led her ultimately to messing up her life and Shadow’s. When she attempts to be reborn, things don’t go according to plan and she ends up in purgatory, which is pretty crappy. But I love the fact that the series basically put her and Mad Sweeney in a buddy-cop subplot. 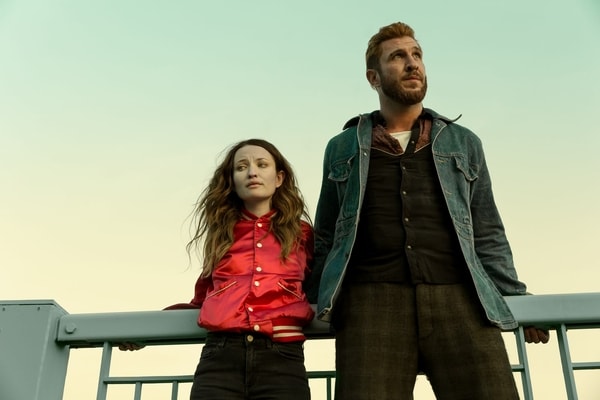 He wants the coin. She wants to save her husband. Laughs and mishaps ensue. Her story and his are compelling and fun and they road trip in an ice cream truck as she slowly rots. 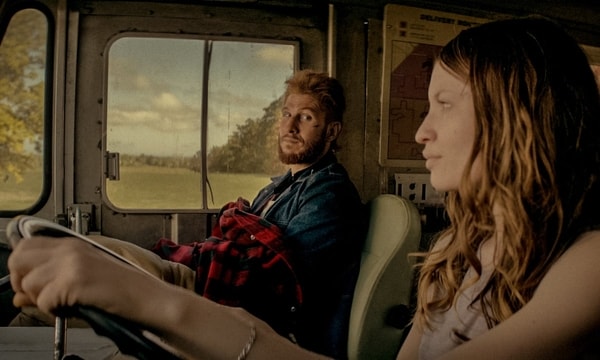 Other characters are explored in more detail and given larger stories, including Salim, Mr. World, Technical Boy, Media, Bilquis and so on. And the vignettes in the novel of how each god arrived in the USA are given their dramatic time. And I think that’s where American Gods the TV show runs into pacing problems. They expanded the novel’s cast so much that the important narrative threads started to become diluted. 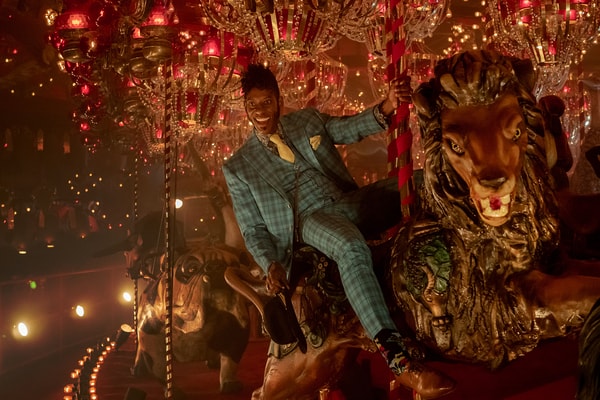 They took three seasons of TV to get to the point of the book where Shadow is hanging on the tree. And after a while, I found myself fast forwarding through some of the flashbacks. If I hadn’t read the novel a few times, I wouldn’t have remembered where the plot was or who wanted what in the TV show. 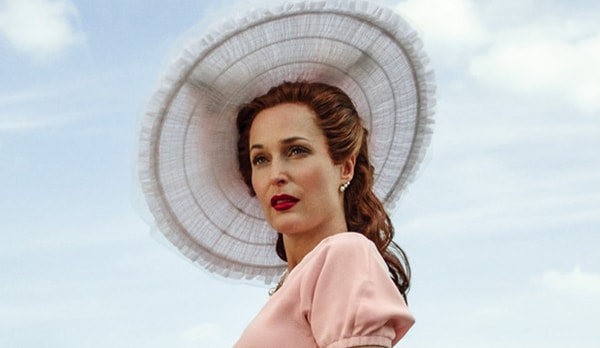 This is unfortunate for the show, but if you can handle the sloth of the pacing and the narrative detours, this is a real gem. And adding to the surreal, emotive, visually explosive grandeur of it is powerful acting, great directing, amazing sound tracks and moody special effects. To say nothing of the all-star cast. The show boasts having Gillian Anderson, the magnetic Crispin Glover, Yetide Badaki, Orlando Jones, Cloris Leachman, and Corbin Bernsen.

I think as well, the 20 years since the novel was published have given increasing context to some themes the TV series handles really well. The issue of race and the slave roots of America is front and center and leaned into, to powerful effect. Likewise, the role of women, historically and religiously is dealt with in really interesting ways. And finally, the show goes all in on the New Gods. Since the novel’s publication, AI has come true, social media was invented and became ubiquitous, as well as the surveillance state, and a dozen other focuses of human worship. This is one of the most fascinating parts of the show.

Starz did not choose to pick up the fourth season, but I can imagine circumstances in which some other production company or investor might opt to do a fourth to conclude the story. They’re close. They wouldn’t need more than a season to do it. But if you’re a fan of the book, I definitely recommend checking it out.

Derek Künsken writes science fiction in Gatineau, Québec. His first novel, The Quantum Magician, a space opera heist, was a finalist for the Locus, Aurora and Chinese Nebula awards. Its sequel, The Quantum Garden was an Aurora finalist as well. His third novel, The House of Styx, got a starred review in Publishers’ Weekly and the Library Journal and is out in audio and ebook (order link); and the hardcover will release in May, 2021, as will his novella Pollen From a Future Harvest.

Not familiar with it.

I love the AMERICAN GODS T.V. series. I really like how they’ve expanded the number of gods and the various stories and such, and tried to update it some to the current times. Good choices all around.

It is also a bit slow, which doesn’t really bother me that much. It is also a bit of an odd-duck outlier, like even in this golden age of entertainment, that something like this got made seems remarkable.