Fungi From Yuggoth & Other Poems (Ballantine, 1971). Cover by Gervasio Gallardo

I’m a little embarrassed to admit I haven’t read much Lovecraft poetry. Well, I read his marvelous “Drinking Song,” from his first published story “The Tomb,” which reads exactly like the ballads belted out by drunken revelers in every Scottish tavern I’ve ever been in. Here’s the first stanza.

Come hither, my lads, with your tankards of ale,
And drink to the present before it shall fail;
Pile each on your platter a mountain of beef,
For ’tis eating and drinking that bring us relief:
So fill up your glass,
For life will soon pass;
When you’re dead ye’ll ne’er drink to your king or your lass!

Read the whole thing at the link above.

Lovecraft didn’t get much respect as a poet until long after his first fiction collection, The Outsider and Others, appeared in 1939. His Collected Poems was first published by Arkham House in a tiny print run in 1963, and then retitled Fungi From Yuggoth & Other Poems for its Ballantine paperback reprint eight years later. 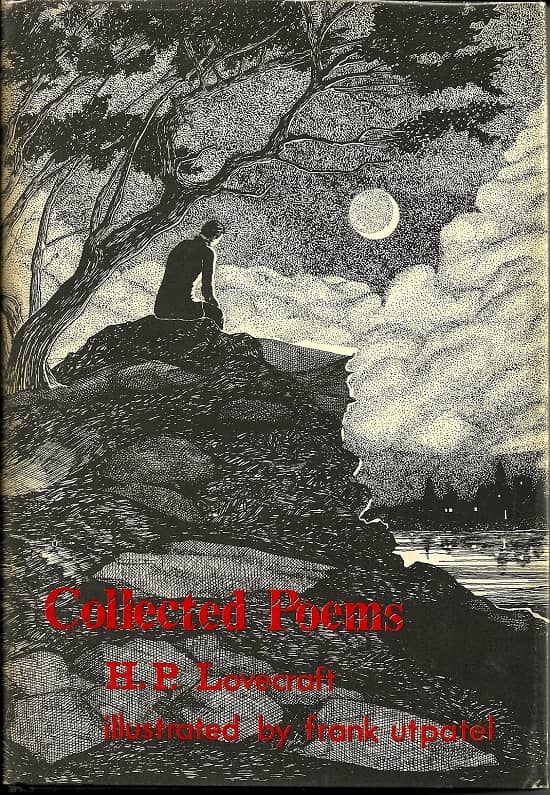 Fungi From Yuggoth & Other Poems is a fine book to dip into during long winter evenings, and it’s started the work of turning me into a fan of Lovercraft verse. I found the paperback edition in a small collection of anthologies I bought on eBay, and I was delighted to discover that it has all eighteen of Frank Utpatel’s delightful woodcut illustrations from the Arkham House edition.

It also has August Derleth’s foreword — and even the Arkham House colophon in the front of the book! Now that’s a faithful reproduction. 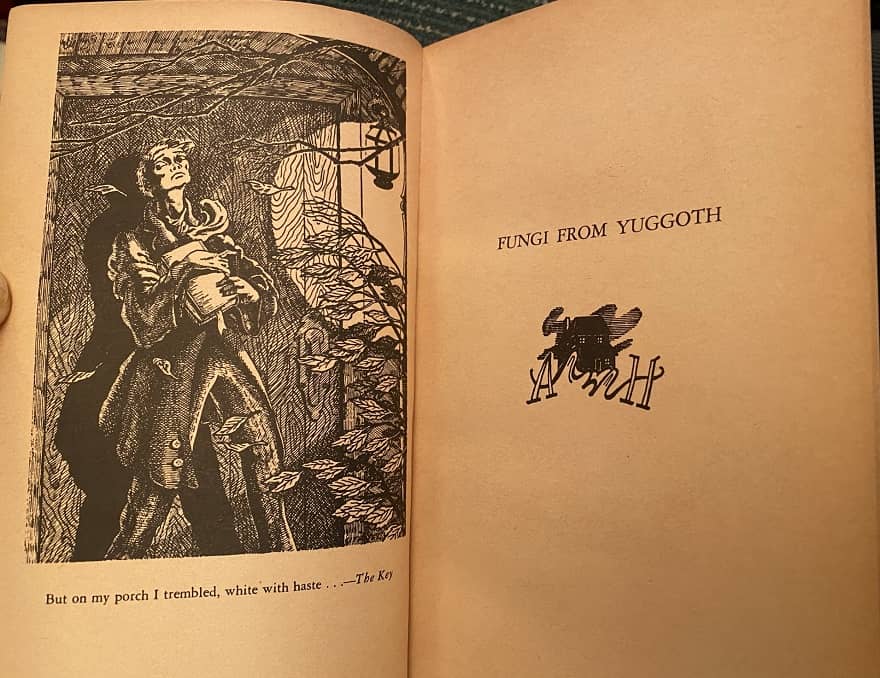 The Ballantine paperback is a slender volume — 138 pages — but it contains most of Lovecraft’s most beloved poems. At least the ones I’m familiar with anyway, including his famous tribute to Clark Ashton Smith (“To Klarkash-Ton, Lord of Averoigne”), “The Messenger” and “Where Once Poe Walked,” the 11-page epic “Psychopompus,” and of course the 26-page sonnet form “Fungi From Yuggoth.” 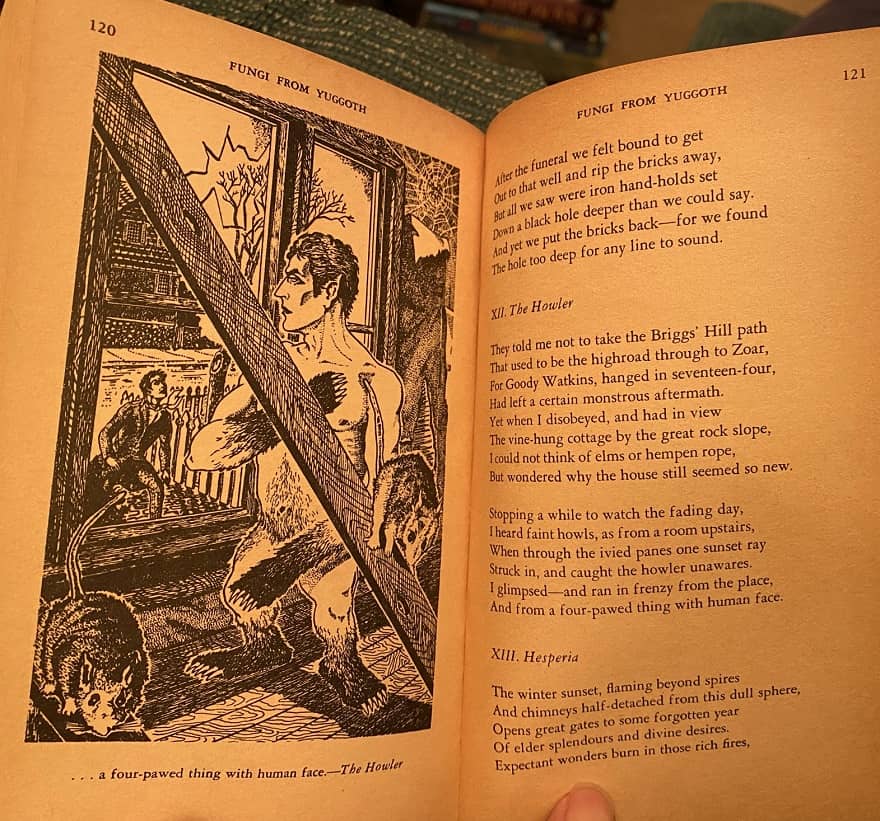 Woodcut for “The Howler” by Frank Utpatel

The editorial summation on the inside front cover calls Lovecraft’s poems “little masterpieces of weird narrative, capsuled in sonnet form,” which is a fine description. 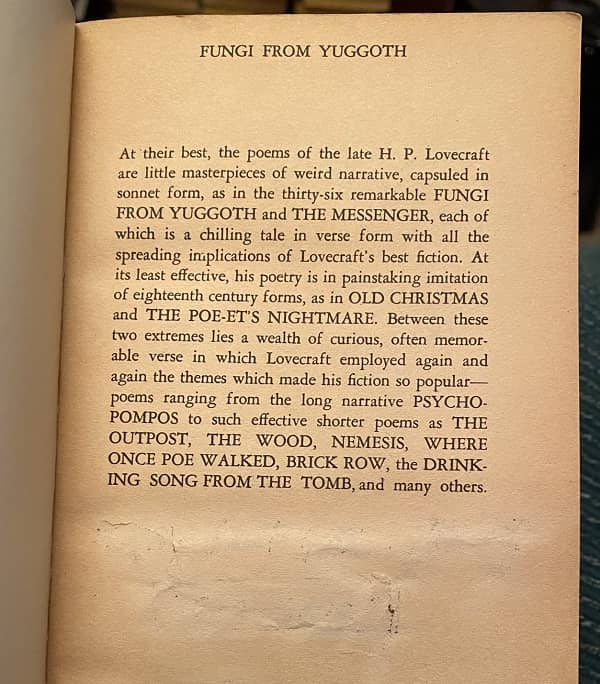 Inside cover of The Fungi From Yuggoth & Other Poems

In his Foreword however, Derleth is frankly more critical of the bulk of Lovecraft’s poetry, saying:

The best is here, and some of the second-best, and some examples of that very early work — which represents, in fact, the bulk of Lovecraft’s verse, a bulk that is not collected here because, as Winfield Townley Scott observed in a brief essay on Lovecraft as a poet, it is “eighteenth-century rubbish.” It may be quaint at first reading, it may amuse, but in the mass it is indeed painfully dull, and one can only wonder that anyone, even if only to entertain himself, should have devoted so many pages to this kind of imitative verse when he might much more fruitfully have been setting down more of those macabre stories for which Lovecraft did ultimately achieve the small fame which is rightfully his.

Of course, Lovecraft’s complete poems — some 500 of them, including hundreds of Christmas greetings, fragments, and verse dashed off in his unpublished letters — have been compiled and printed in multiple editions for decades now. Perhaps the best is the 604-page The Ancient Track: The Complete Poetical Works of H. P. Lovecraft from Hippocampus Press, but there are more compact collections as well.

Opinions of Lovecraft’s poetry — like his prose — have improved dramatically over the years. When Jeremy Lassen proudly pressed a copy of the original Night Shade Books edition of The Ancient Track in my hands at the World Fantasy Convention in 2002, he told me “Lovecraft wasn’t a good poet…. he was a great poet.”

Was he right? I’ll let you know when I get further into the book. But my money’s on Jeremy.

Fungi From Yuggoth & Other Poems was published by Ballantine Books in February 1971. It is 138 pages, priced at $0.95. The wraparound cover is by Gervasio Gallardo.

I was delighted to learn that you are beginning to appreciate HPL’s poetry. (Others may groan and clutch their heads, heh! De gustibus non est disputandum.)

I hope you won’t mind if I quote an authority on Lovecraft’s verse: S. T. Joshi. “By 1928 he is already railing against the use of the archaisms, inversions, and ‘poetic language’ that had cluttered his earlier verse. He had begun to realize that living poetry cannot wear the garments of a prior day, and saw that his own previous poetry had merely been a vast psychological game he had played with himself-an attempt to retreat into the eighteenth century as feeble and pathetic as his longing for a periwig and knee-breeches. But when he sent “Recapture” to a correspondent, he added the note: “Speaking of my stuff-I enclose another recent specimen illustrative of my efforts to practice what I preach regarding direct and unaffected diction-a sort of irregular semi-sonnet, based on an actual dream.”[11]

What had triggered this radical shift? There must have been a number of factors. Principally it was simply his awareness that the twentieth century was not a nightmare from which one could simply wake up and walk away but an age whose uniqueness demanded expression in art and literature; secondly, Lovecraft may have been struck by the brilliant poetry of his friend Clark Ashton Smith, who could have shown Lovecraft how to harmonize a very selective use of archaism with a generally modern and vigorous approach; most directly, there was Lovecraft’s work on a poetic handbook, Doorways to Poetry (never published), for his friend Maurice W. Moe, and his reading of Donald Wandrei’s Sonnets of the Midnight Hours (1927), probably the direct model for Lovecraft’s Fungi from Yuggoth. In any case, his sonnet-cycle, while by no means radical, can take its place with the work of other conservative poets of the day–Rupert Brooke, Ralph Hodgson, Robert Hillyer, John Masefield, Walter de la Mare, and others. Lovecraft may never be known for his poetry; but at its best it offers the same elements of cosmic horror, purity of diction, and philosophic resonance that characterize his prose.”

(Introduction to An Epicure in the Terrible: A Centennial Anthology of Essays in Honor of H. P. Lovecraft.)

Is it possible to have discussions about literary merit as opposed simply to comparing what I like with what you like?

People invested in this topic might proffer one or a few HPL poems and actually doing the work of demonstrating, or trying to demonstrate, their genuine literary merit.

To be able to do that, participants might first decide if they are qualified to assess poetic merit. I don’t think this calls for external credentials such as college degrees; for one thing, someone may have a degree in English and yet be a poor judge of literary quality (for example, if one’s judgment is impaired by political obsessions, career ambitions, etc.).

But someone offering judgments about poetic excellence should, wouldn’t you think? — be someone who has read a lot of poetry, who turns again and again to poetry for pleasure and inner nourishment, etc. Conversely, if the only poetry one has read is that of Lovecraft, Howard, and Smith, one might hesitate to offer judgments about poetic merit, because one would likely really be just expressing a liking for these famous colleagues and their work.

> But someone offering judgments about poetic excellence should, wouldn’t you think? — be someone
> who has read a lot of poetry, who turns again and again to poetry for pleasure and inner nourishment, etc.

Makes complete sense to me. I’m not generally a poetry reader, so I’ll bow out now as a participant. But I’d love to see that conversation happen.

Thanks for the great quote! I like Joshi’s thesis that Lovecraft was strongly influenced “by the brilliant poetry of his friend Clark Ashton Smith.” The Weird Tales circle of writers (Howard, Smith, Lovecraft) all influenced each other, so this seems an elegant theory.

I’d like to see that conversation too, John. Sometimes Lovecraft circles need to let a little air in and see what non-fans think of his work, especially when people have first read him as adults. For me — he’s been a favorite since I was 14. But I think he’s been overpraised lately (notably, a Library of America volume and appearance in Penguin Classics — though indeed Penguin Classics has really cheapened their name lately).

How good were they? You can take the poetry on its own merits – I’ve read very little of either, although I’d definitely rate CAS over Lovecraft – but I think you’d need to look at the context too. Their poetry was very anachronistic. I’d have a lot of sympathy for CAS whose first love was poetry. He was lauded as a young man, but the kind of poetry he was writing was almost entirely eclipsed by the work of poets like Lowell, Eliot, Auden, who favoured a pared down, vernacular style and dealt with contemporary issues.