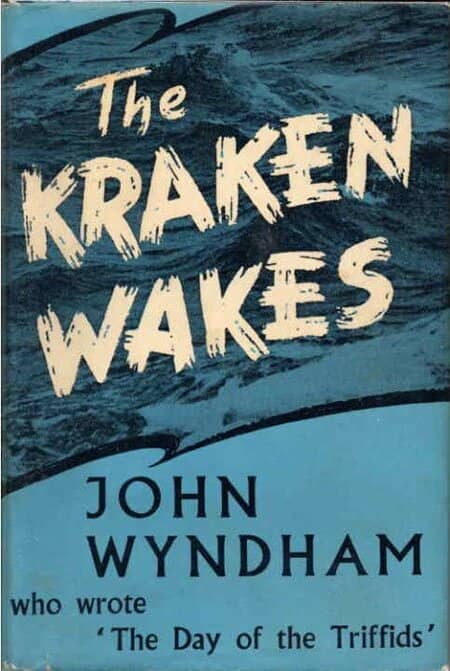 John Wyndham was an English author, popular for five or six major novels published in the 1950s and 1960s, among numerous other books. The first of his famous novels was The Day of the Triffids (1951), about murderous walking plants and a meteor shower than causes most of humanity to go blind. Several following novels were also catastrophes of various sorts, and were published both in the UK and the US, though sometimes with variant titles. The second of these was The Kraken Wakes (UK 1953), about aliens who settle into Earth’s oceans, attack cruise liners, and subsequently wreck the climate and the world economy. It was published in the US by Ballantine as Out of the Deeps (also 1953). What I discovered only recently was that the two books are of course very similar but not identical, and nothing in either edition (in particular the US edition, presumably the second published), indicates any such differences. In fact Ballantine’s copyright page claims “This novel was published in England under the title The Kraken Wakes” which is, in fact, not literally true.

Title changes from UK to US editions were not frequent, but weren’t unusual either. A later Wyndham novel appeared in the US as Re-Birth, and then in the UK as The Chrysalids. The most famous UK/US retitled book of all time is likely the first Harry Potter novel, Harry Potter and the Philosopher’s Stone in the UK and Harry Potter and the Sorcerer’s Stone in the US. Some of these cases can be understood due to variants in the language between the two countries; kraken, and philosopher’s stone, e.g., are presumably less familiar to Americans than to Brits. Yet whether editions of such re-titled novels are actually, essentially, the same book is generally not evident from copyright pages. Some changes are well-known but anecdotal, like the changes in the text of the Harry Potter books (all of them? At least the early ones), again to substitute American colloquialisms for British ones. 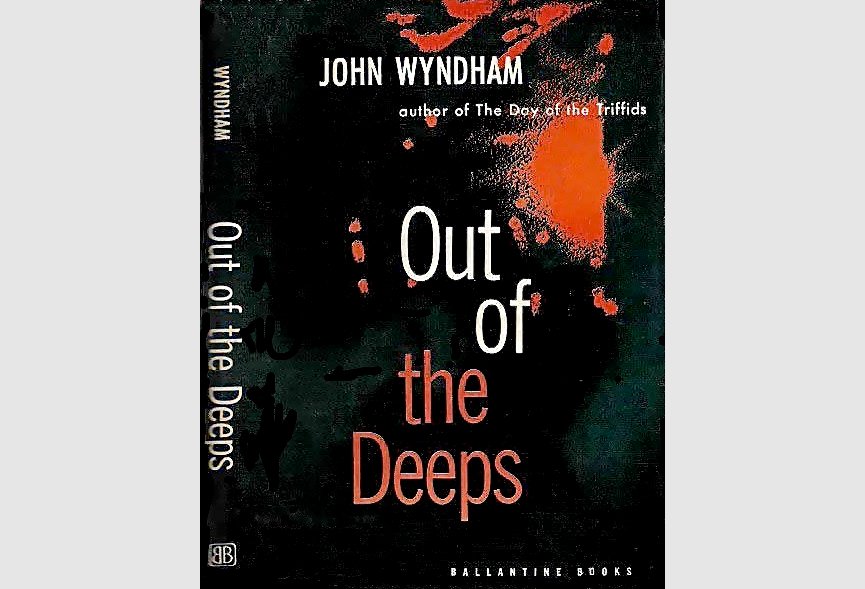 As it happens, I first read Wyndham’s Out of the Deeps in 1971, I think perhaps in the paperback Hitchcock anthology Slay Ride (www.isfdb.org/cgi-bin/pl.cgi?1845), but didn’t own a separate copy of the book until the December 1977 Ballantine fifth printing. (As it turned out, this was Ballantine’s last printing of the book, and so the last edition of the US version of this novel.) Some years later, I think perhaps at a Worldcon (it was September 1988), I bought a copy of the UK version, The Kraken Wakes, not because I thought it was a different book, but to revisit the novel under its British title, which I did later that month. But I did not exam the two versions side by side.

Rereading many of the classic 1950s novels over the past couple of years, I reread Triffids last year, having only a US paperback edition, and then early this year picked up my copies of Out of the Deeps and The Kraken Wakes. The point of this elaborate introduction is because it was now evident, at a glance, that there was some discrepancy between the two. Out of the Deeps in the Ballantine edition is 182 pages of medium-sized print. The Kraken Wakes, in the 1980s Penguin edition I’d purchased, is 240 pages of smaller print. And opening the books shows an immediate textual difference: the UK edition has an introductory “Rationale” completely missing from the US edition.

So this time I reread both books, side by side, noting differences between the two.

Of course this is an academic issue, since the US version hasn’t been in print since 1977; anyone looking for old Wyndham novels to read would find only the UK version with the Kraken title.

And in either version it’s a substantial, suspenseful novel, in part a “cozy catastrophe” and in part an alluring tale about mysterious, inexplicable aliens. And also, from a contemporary perspective, a novel about climate change and existential threats. 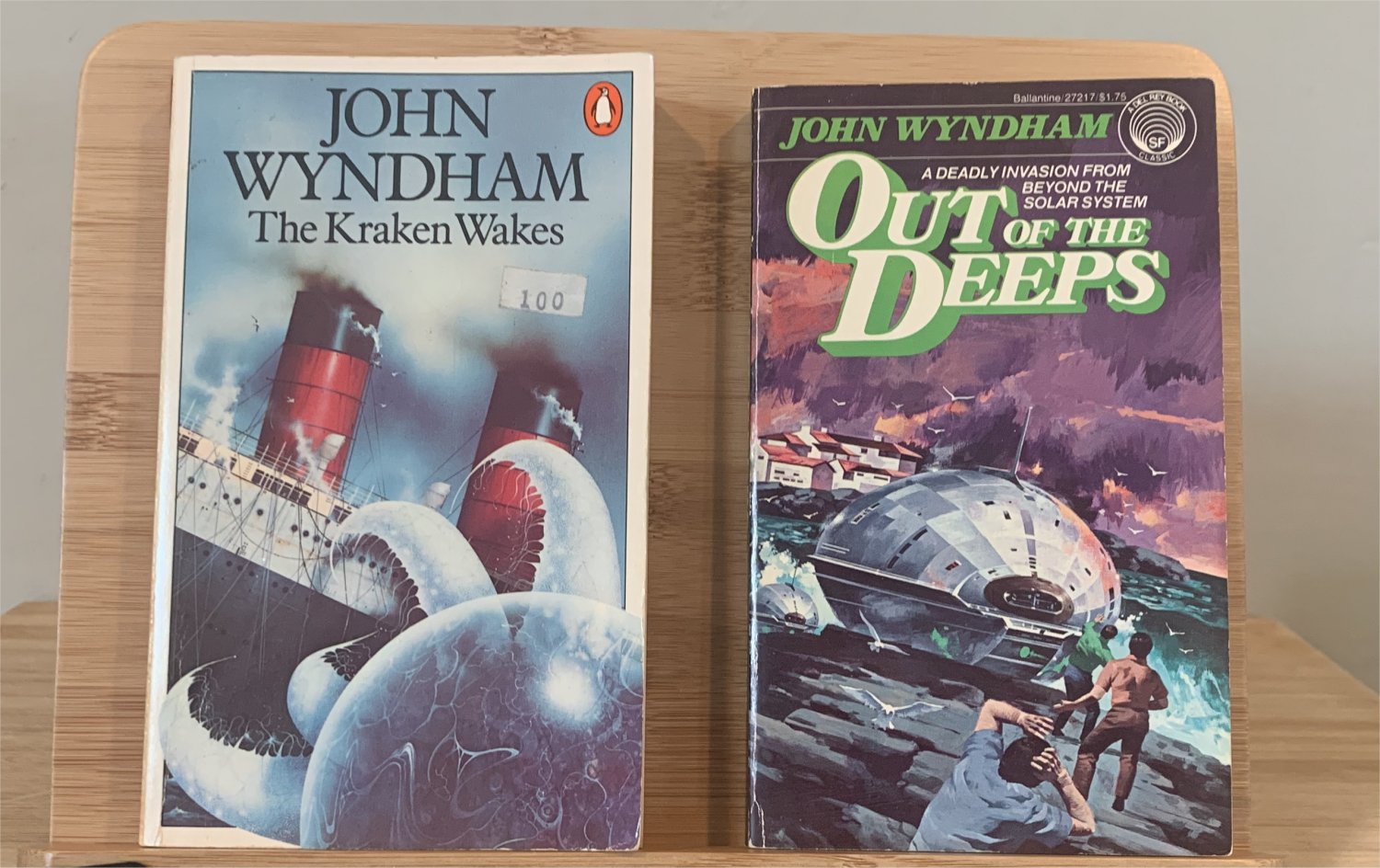 Mysterious aliens, arriving on spaceships that fall into the oceans, attack ocean-going vessels and send “sea-tanks” onto island shores (perhaps to collect specimens) that kill people and leave coatings of slime in their wakes. (These two themes are illustrated on the paperbacks above.) The aliens remain unseen, and their tactics change as they cause ocean levels to rise, flooding cities and wrecking the world economy. Radio reporters Mike and Phyllis Watson follow news from around the world, and witness one island attack, before fleeing London for their isolated Cornwall cottage. A deus ex machina solution appears to kill the unseen creatures, and our heroes are confidant humanity will recover.

Gist of UK vs US differences:

The bulk of differences are cuts from the UK to the US edition of sections of dialogue, many arch and full of Britishisms, that the Ballantine editors (Ian and Betty, remember), presumably felt US readers would not understand, or warm to. There are a great many of these, sometimes pages at a time, only a few noted in the summary below. Or perhaps these passages were cut simply to tighten the novel, which they do effectively. More substantially, the US edition omits from the UK edition an introduction (“Rationale”) and a flash-forward at the beginning of the third section; these have the effect of leaving matters in suspense throughout the book, while the UK edition’s “Rationale” reveals the characters have survived and are happy, making that version much more a “cozy catastrophe” then the US. Finally, the US edition expands the perfunctory UK ending.

This is a first-class world disaster novel told as a mix of conversations, second-hand news reports, and scientific speculations; most of the action is off-stage, with three major exceptions. It’s partly also a story about mysterious aliens, though the apparently intelligent invaders who take up dwelling in Earth’s deep oceans remain inexplicable and are never contacted. The principle theme, then, is how humanity deals with an existential crisis. Writing this in July 2020, it’s hard not to see the similarity of the novel’s reactions of the British public, to the degree they realize this alien invasion is truly a problem and not a manufactured hoax, with the current American coronavirus response.

Our main characters are Mike Watson (the first-person narrator), a journalist for the EBC (not the BBC, he clarifies), and his wife Phyllis, who writes radio documentary scripts. The book is divided into three “Phases,” with an introductory “Rationale” in the UK version.

Mike and Phyllis watch icebergs in the English Channel (!); we’re in the future looking back on the events of the novel. Mike ponders writing a book about this whole affair. He’s concerned about a proper epigraph, and settles on a passage from Tennyson, shown on page 10, about the Kraken. These three pages are full of banter between husband and wife, virtually all of which, throughout the book, were cut in the US edition. I’ll quote just one little sample:

“Now, if I were you I should divide the whole thing into three phases. It falls naturally that way. Phase One would be—”

“Darling, whose book is this to be?”

“Ostensibly yours, my sweet.”

As they see an iceberg. You can see how the deletion of many passages of such dialogue changes the nature of the US edition.

There must, I think, be a great many people who go around just longing to be baffled, and who, moreover, feel a kind of immediate kin to anyone else who admits bafflement along roughly similar lines. I say ‘roughly’ because it became clear to me as I read the mail that classifications are possible. There are strata of bafflement. A friend of mine, after giving a talk on a spooky experience, was showered with correspondence on levitation, telepathy, materialization, and faith-healing. I, however, had struck a different layer. Most of my correspondents assumed that the sight of the fireballs must have roused me to a corollary interest not only in saucers, but showers of frogs, mysterious falls of cinders, all kinds of lights seen in the sky, and also sea-monsters.

So the UK edition ends with the Deus Ex Machina being described second-hand; the US improves this somewhat with the unexpected appearance of Bocker on their cottage-island to explain developments more completely.

Still, the gist of the ending is… the threat simply goes away. It’s defeated without ever learning where the aliens came from or what they were trying to accomplish. 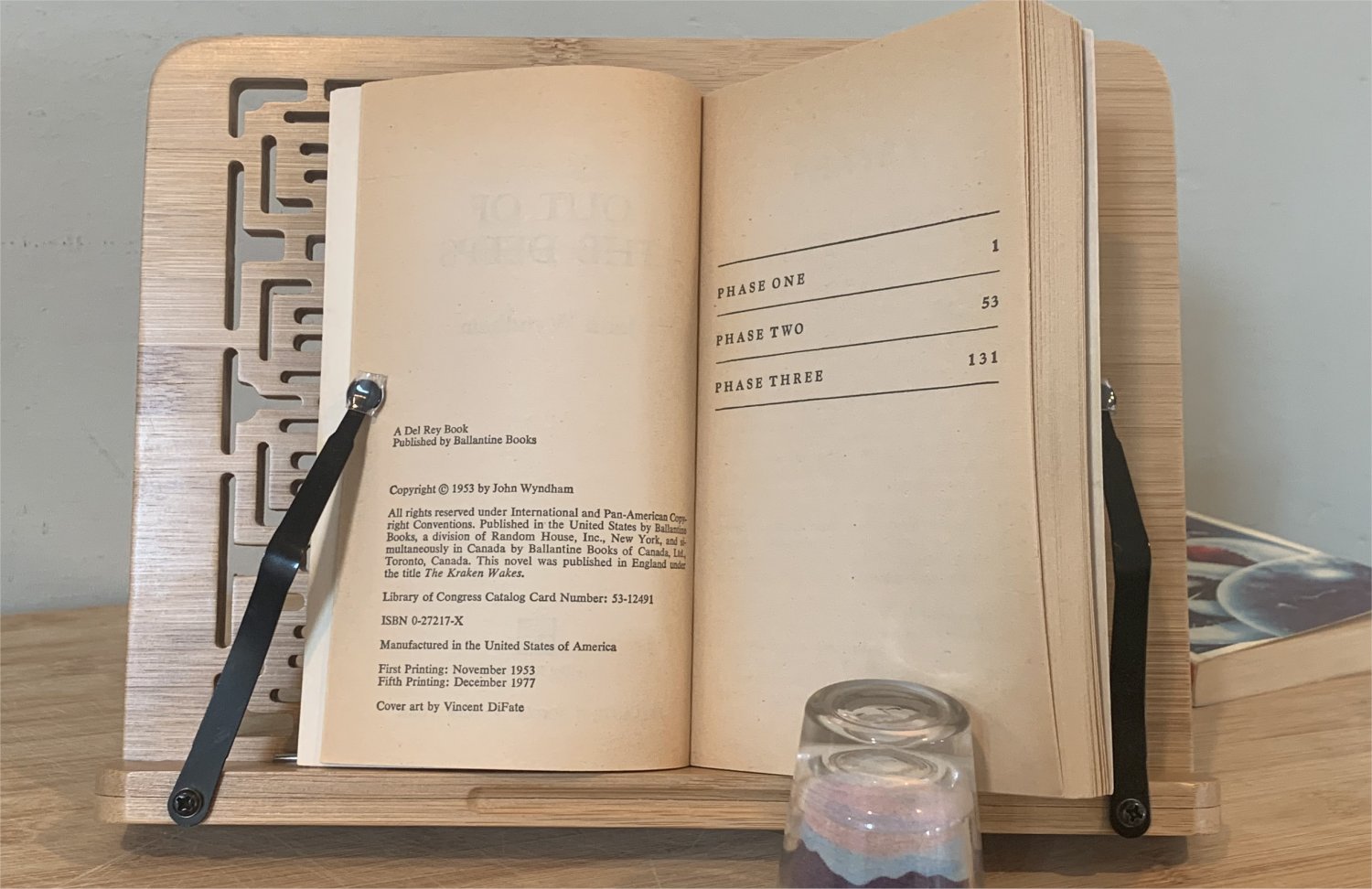 Finally, to return to the opening theme: I suspect, without having an easy way to research this, is that it was more common than most readers realized for there to be differences, sometimes substantial, between UK and US editions of some books. Via SFE’s annotations, this was apparently true of most of Wyndham’s major novels. Was it true for Clarke in the 1950s? Ballard in the ’60s? Only wondering; I have no evidence either way. And I suspect the publishers never tell you. Certainly Ballantine’s copyright page gives no clue about the substantial difference in the texts of the two versions of this novel.

Mark R. Kelly’s last review for us was of Poul Anderson’s Brain Wave. Mark wrote short fiction reviews for Locus Magazine from 1987 to 2001, and is the founder of the Locus Online website, for which he won a Hugo Award in 2002. He established the Science Fiction Awards Database at sfadb.com. He is a retired aerospace software engineer who lived for decades in Southern California before moving to the Bay Area in 2015. Find more of his thoughts at Views from Crestmont Drive, which has this index of Black Gate reviews posted so far.

Very interesting article Mark. When John posted his Out of the Deeps article some time back it inspired me to read my Kraken Wakes, which I really enjoyed, only kicked myself I had left it gathering dust on my shelf for so many years.

Can’t really decide re the Rationale bit. It did tend to damp down the suspense a hit, kind of that old chestnut about TV series “They can’t die because they have to be here for next week’s episode”.

I had no idea the differences between the two books were this substantial. Time for a reread.

As you say, an academic issue, but nevertheless endlessly fascinating to some of us lost souls! Thanks!

Wow, I remember looking at this a dozen times on my dad’s bookshelf but never cracking it. I’ll have to look into it because Triffids is triffic.

News to me! I know I read the US edition, but now I do have the UK e-book, so time to re-read.
Are you familiar with the radio drama versions? There is an excellent BBC version as well as a longer and drier CBC version. Both are worth hearing.

I don’t remember the exact details, but there’s an explanation for why this happened in Amy Binns’ “Hidden Wyndham”

Thanks for the comment, Charles. Actually I ordered the Amy Binns book before I did my post, and looked up the titles of these two books, but didn’t see an explanation. I admit I didn’t read through the entire book. Perhaps the explanation is there somewhere?