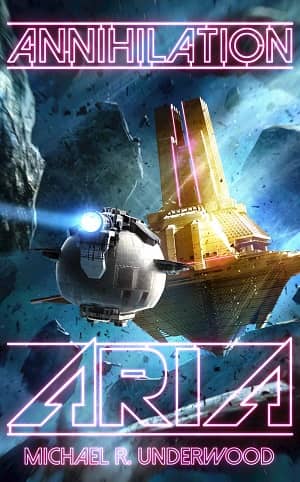 I love a space fantasy adventure. Maybe I’m missing release announcements, but I feel like we’re not getting as many of those novels these days. Hyper-realistic far-future SF like The Expanse or hard science fiction like Alastair Reynolds’ work is great, but sometimes I want FTL and myriad aliens and whatnot, like Tanya Huff’s Confederation novels or, really, Star Wars.

But those elements aren’t enough, since anyone can slap together a Star Wars rip-off and call it a day. The most important thing is characters to root for, who are more nuanced than just being a Han Solo stand-in.

Maybe all of that’s a tall order. If it is, then even more kudos to Michael R. Underwood, for producing exactly that kind of novel.

(I missed these rambling, context-setting intros before I ever mention what I’m reviewing. I really did.)

Annihilation Aria is basically Star Wars, Star Trek and Serenity mixed together, but with a plot closer to The Mummy (or The Mummy’s plot with Rick and Evelyn already a couple). Max, Lahra and Wheel are delightful as a found family in how different they are, and that those differences are what makes them endearing to each other. Lahra was the character who shone the most for me; her solar-powered weaponry is a nice solarpunk touch, and her people’s ability to use songs to focus in battle and subtly manipulate their encounters is varied and well-utilized. Plus, I love how it’s never explained as anything more than basically magic. Max can’t find a rational explanation but knows it has more power than Lahra realizes – like how you can’t always hear how you speak while you’re speaking.

One of the other things that stands out is Arek, our principle antagonist within the Vsenk Imperium. You get the almost monolithic Big Bad Empire at first, but then learn that it’s rife with ongoing political feuds, with Arek’s faction representing a more moderate ideology. What I found particularly cool is that Arek is progressive for a Vsenk. He’d never consider giving the lesser races complete freedom, but he sees the practical value of things like speaking respectfully toward subordinates and the police not using excessive force. It makes him seem much more natural as a character, and oddly made me more sympathetic toward him, even though the Vsenk in general are brutal subjugators.

With the Vsenk, Annihilation Aria veers away from archaeological mystery to political and revolutionary intrigue, putting our heroes into a different situation than you’d expect from the start. The adventure pacing and wonder are consistent throughout, though, with some excellent character payoffs. Plus fun, like gargantuan space turtles and a falling-apart ship called the Kettle.

If you like fun (and why wouldn’t you?) keep an eye out for this one, releasing in digital formats on May 5, and in print everywhere on July 21!