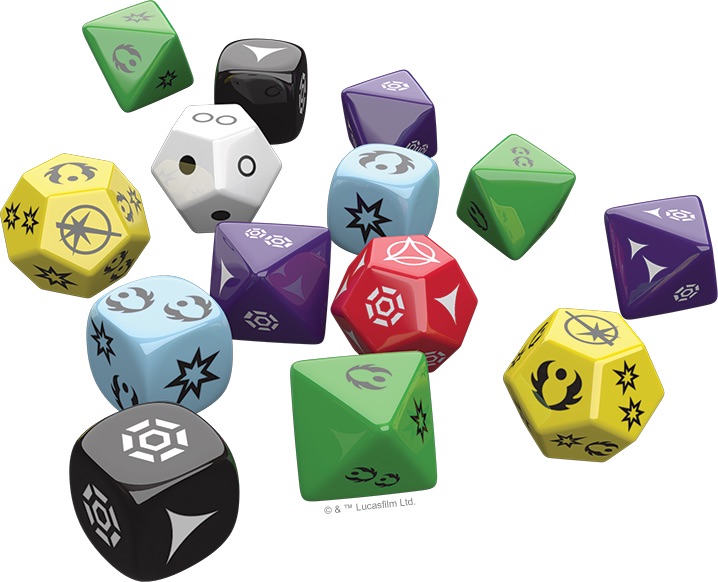 In a previous article, I praised Fantasy Flight Games’ Star Wars role-playing game for its narrative dice system. With its emphasis on cinematic moments, fast play, and narrative moments inspired by the dice, the mechanics work well with playing in the Star Wars universe.

The Edge of the Empire and Age of Rebellion core rulebooks had rules for Force users, but their focus was more about scum and villainy at the edges of space or serving the Alliance for the Restoration of the Republic (i.e., the Rebellion) than about space wizards with lightsabers.

The third and final core rulebook, Force and Destiny, is where players and game masters can get their fun in with using the Force at the tabletop. Fully compatible with the other two rulebooks, Force and Destiny and its subsequent splatbooks expand the options for characters with Force powers. This article will not dive into the powers so much; rather, I want to focus on the mechanics of the Force and how it plays out and feels in this version of a Star Wars role-playing game.

For those, perhaps, not as familiar with Star Wars, what is the Force? Per Ben Kenobi in Episode IV: A New Hope:

Well, the Force is what gives a Jedi his power. It is an energy field created by all living things. It surrounds us and penetrates us; it binds the galaxy together.

(Let’s not talk about midi-cholorians.) Basically, if you can use the Force — only a few people can — you can do really cool things like telekinesis, telepathy, jump higher, see the future, and even possibly become a Force ghost and be able to give advice from beyond the grave. 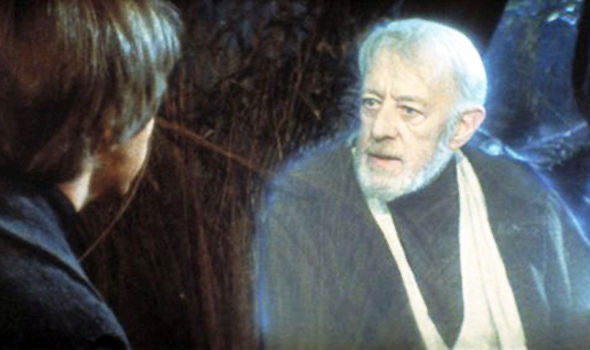 You can also do bad things, like choke people from afar and shoot lightning from your fingertips. 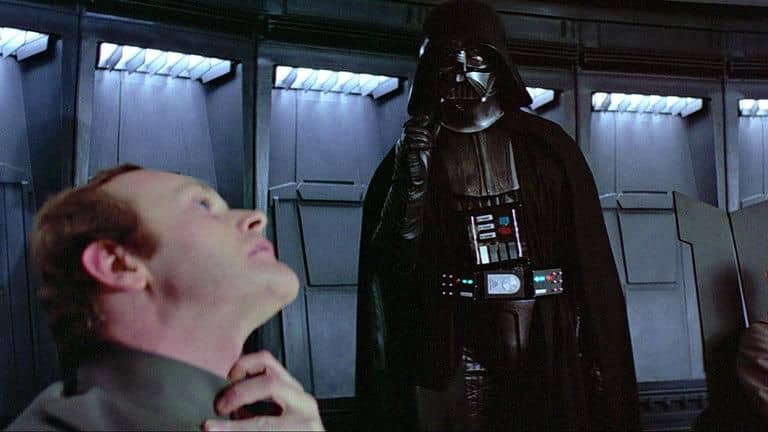 The Force has this dualistic nature. You can use it for good, the Light Side, or for bad, the Dark Side. Darth Vader, formerly Anakin Skywalker, fell to the Dark Side, giving in to his emotions of anger and fear. Luke Skywalker found a different path, holding in check his fear and anger and becoming a Jedi (albeit self-proclaimed), one of the anointed users of the Force and one-time defenders and protectors of the Republic before the Emperor and Darth Vader destroyed the order and killed most of them.

A character’s alignment with the Dark or Light Side is measured using Conflict in Force and Destiny, a sliding scale from 1 to 100. During play, if the player engages in questionable (or not so questionable) activity, the game master assigns them Conflict points. At the end of the session, each player rolls 1d10. If the roll is higher than the Conflict points they earned in that session, they advance upward on the scale by the difference. Roll under, and they slide downward by the difference on the scale, toward the Dark Side. Being a Light Side Paragon or a Dark Side User grants specific benefits (if that can be said of Dark Side users) to the player in the game. 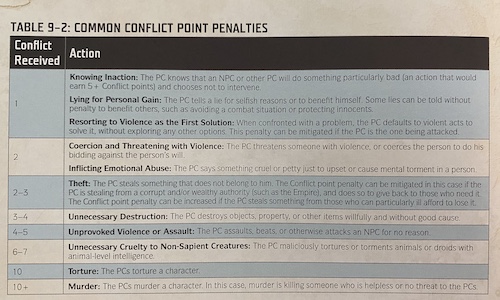 The dice for Force and Destiny include a white, twelve-sided die called the Force die. Instead of numbers, it has a set of white and black pips. In fact, five of the sides have white pips for a total of eight pips (three sides have two pips). The other seven sides have black pips for a total of eight pips (one side has two). This die is used for two purposes: generating the session’s Destiny point pool and generating Force points for Force users to use. The number of sides with white and black pips has important consequences we’ll get to shortly.

A beginning Force user in this game will have a challenge, not unlike Luke as he struggled to develop his skills. He has resounding successes (blowing up the Death Star) but definitive failures—both great and small. Over time he gains in power but early on he struggles to harness the Force into a tool he can use. Force and Destiny mimics this with both the Force die and the construction of the Force abilities. 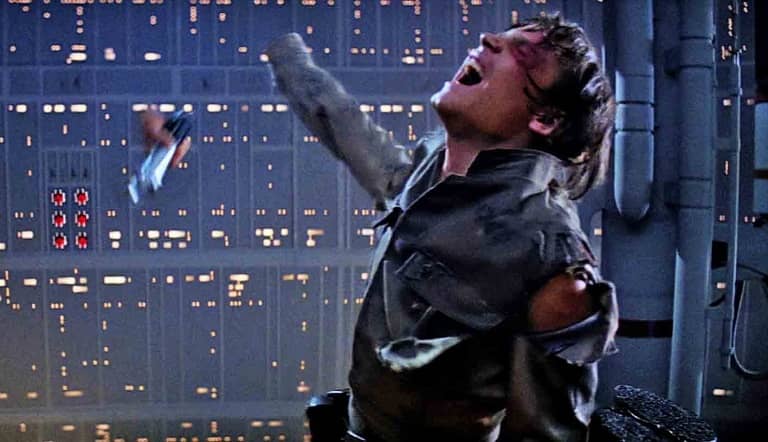 The Force talents from your career specialization are typically additions to rolls or benefits during encounters. These are more mundane (though potentially powerful) effects. Sense Emotions allows you to add a Boost die to Charm, Coercion, and Deception checks—meaning you are more likely to succeed (this is different than the Sense Force ability, which is significantly more powerful). The Once a Learner talent lets the player spend four Strain (the “mental” equivalent to Wounds—aka, hit points) to let an ally increase their Force rating by one or more for the round. That’s a lot of Strain for letting a player increase their Force rating. Why?

All Force users start out with a one in Force rating. That’s right: one. This lets the player roll one Force die. When the character advances enough, they can increase their Force rating by one. This then lets the player roll two Force dice. And so on. Because seven of the sides on that Force die have Dark Side pips, those statistically appear more often. Additionally, more powerful or upgraded Force abilities require two Force pips to use.

When those Dark Side pips show up, the player can use them for their Force abilities, but at a cost. They must flip a Destiny point from Light to Dark (i.e., giving it back to the game master to use) and suffer three Conflict (recall, this is tabulated and rolled against at the end of game to see if the character slides up or down the Dark/Light Side scale).

The temptation to use those Dark Side pips for less powerful characters presents itself frequently. If a fellow player’s character is wounded, a Force user with the Heal/Harm power can aid them. But if, as they go to heal them, they roll a Dark Side pip on that single Force die they can roll, the Force user can help, but at a cost. This requires the player to consider his or her character’s actions, not just heal someone and call it a day.

Additionally, a number of the Force abilities (the core rulebook describes 11, while the career books and two adventures have another 8) have the dualistic nature of Heal/Harm ability—again, reflecting the nature of the Force in that the same ability can be used to do good or bad. If a player chooses to use Harm, they can, but at the cost of Conflict. Remember, characters roll a 1d10 at the end of the session—so Conflict points can go up pretty quickly and make that roll a challenge to stay on the Light Side of that roll. This then works itself out across multiple sessions. 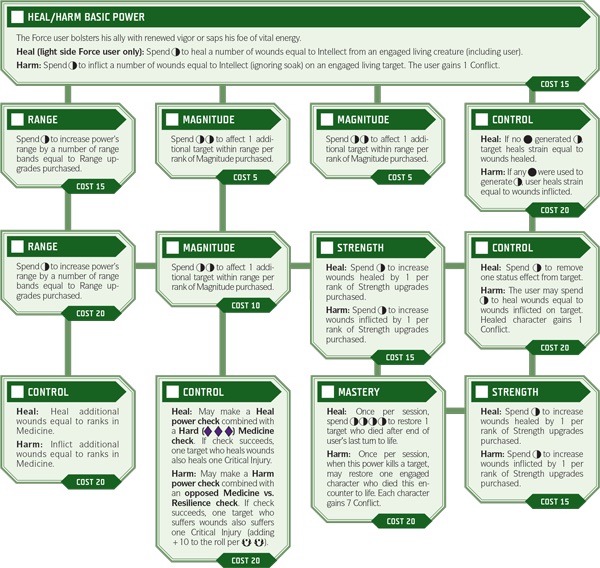 The powers themselves cost experience points to upgrade in various ways, whether in the Range, Control, Strength, or Magnitude of the effects. Player choice in how they spend experience points really comes into play here. Does she purchase many different abilities but only slowly master them, or does she sink her experience points into one or two abilities and master them more quickly? And, of course, players need to spend experience points on their career specialization talents because that this where they will find the Force Rating increases—one increase, at the bottom of the tree. Some of those talents come with a Conflict cost as well.

A few of the Force talents are inherently challenging and tempting for the Dark Side (the Warrior’s Terrify Force talent, is an example), in that they generate automatic Conflict simply by knowing them. This makes sense, and you tend to find more of these in the martial-oriented careers.

“Patience you must have,” said Yoda.

As the players gain and improve their Force abilities, they can and do become very powerful characters, and they get a sense of satisfaction because they have earned it by playing in sessions and gaining experience points and making difficult choices, balancing using Dark Side pips versus deploying the ability. Force and Destiny’s rules for using the Force mimic, I feel, accurately the use of the Force we see on screen. New initiates struggle. They get frustrated. They are tempted to the Dark Side. They all improve, but some take the easy way, that of the Dark Side. Our heroes, however, follow the more difficult path, when using the Force. 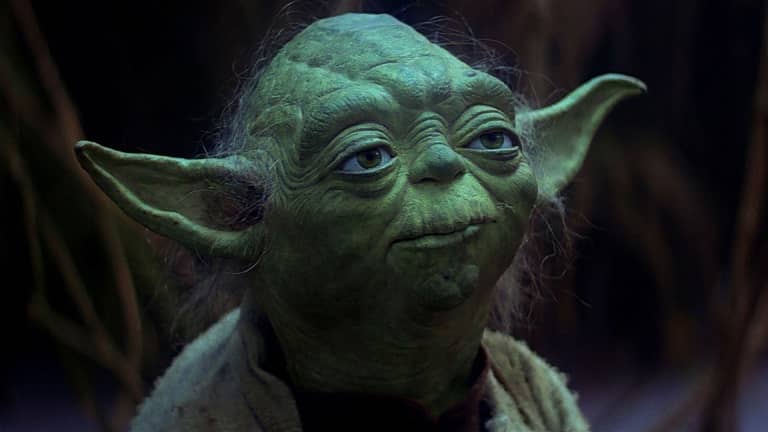 “A Jedi uses the Force for knowledge and defense, never for attack.” – Yoda

Patrick Kanouse encountered Traveller and Star Frontiers in the early 1980s, which he then subjected his brother to many games of. Outside of RPGs, he is a fiction writer and new convert to war gaming. His last post for Black Gate was The Awesome Villainy of the Kafers. You can check out his ongoing, play-by-post, referee-less Traveller game at basiliskstation.blogspot.com. Twitter: @patrickkanouse. Facebook: facebook.com/patrickkanouse