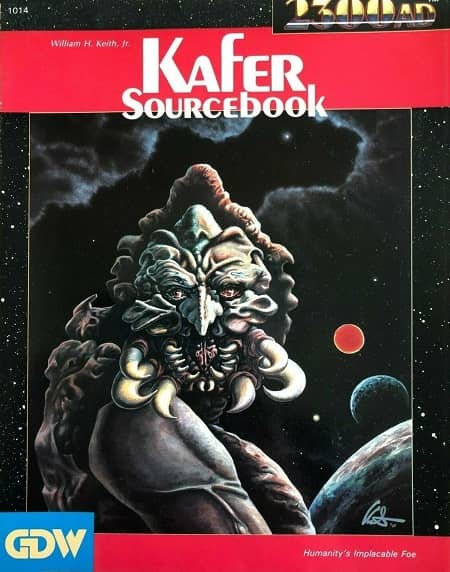 A common science fiction trope is the terrifying alien. The one determined to destroy humanity… or whatever… is in its path. The xenomorph from the Alien franchise is probably the first that comes to mind for many, but others include the unnamed Force from Event Horizon, the Bugs from Starship Troopers, the Taurans from The Forever War, the Predator, and the Thing. These aliens serve as vehicles to terrify and challenge humanity in many ways. In science fiction tabletop role-playing games, aliens abound. Many ruthless enemies like the Sathar of Star Frontiers, the Jinsuls from Starfinder, along with the Alien xenomorph exist in the pages of role-playing games. In my opinion, the Kafers from the 2300AD game are the best of the lot.

2300AD was released by GDW in 1986. Set in the near-ish future and part of an extended timeline from GDW’s Twilight 2000 game, the people of Earth have recovered for a nuclear war in the late 2000s, discovered the stutterwarp drive, and colonized many worlds in the near-earth vicinity. The game pitched itself as hard science fiction — the stutterwarp drive, one of the concessions. Many of the materials focus on realistic orbital mechanics and lifeforms. Planets are often hostile. The book is about humanity’s struggle and challenges in colonizing the stars. 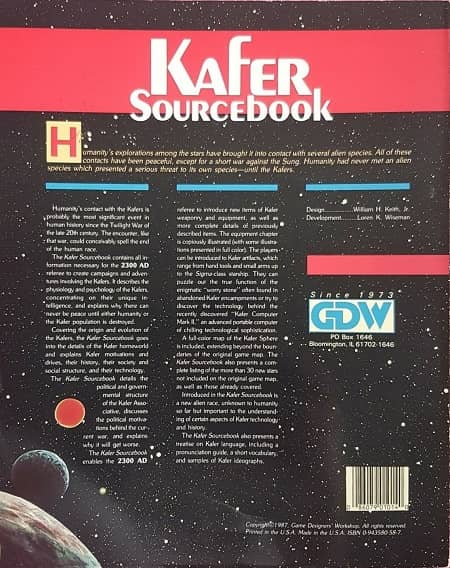 As humanity explored and colonized, they encountered several alien species: Pentapods, Ebers, Klaxun, Sung, and Xiang. The Ebers (Arbors in Mongoose’s adaptation of the setting to their Traveller first edition ruleset) once formed an interstellar civilization, only to have a war return them to a dark age. Their ruins can still be discovered throughout colonized space. Humanity fought a brief war with the Sung, freeing the enslaved Xiang. While the Pentapods remain mysterious, they and the humans have gotten along well enough. The Klaxun are an emerging civilization, and contact and observation are limited. And so it was. 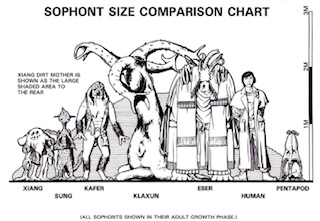 Then a report from Arcturus Station at the far edge of human space noted a brief encounter with a new species after spaceships appeared in the system. Radio communications were exchanged, but no understanding was possible given that no translation could be completed. The alien ships left after a few hours. Two years later, the vessels returned and attacked before proceeding on to the human colony on Aurore in the next system. The new aliens invaded, seemingly intent on wiping out the humans on the planet. On Aurore, German mercenaries referred to the aliens as Kafers — “bugs” in German.

Kafers are human sized and bipedal. They have a carapace on their back that reaches up over the back of their heads. Their mouths, vertical and complicated, along with the carapaces give the Kafers an insect-like appearance. The skin is stiff and has a plastic-like sheen. To humans, Kafer faces are expressionless because of the rigid brow and deep set eyes. Universally, humans  experience significant revulsion upon seeing Kafers. 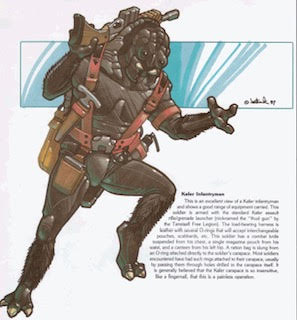 Now, the Kafers are not as terrifying as the Alien xenomorph. Nor are they as enigmatic as the Taurans. What makes them so great, however, as a role-playing villain is the way they can be used to test players and unravel the mystery of Kafer psychology and society. The basis for Kafer civilization and thus the encounters with them is unlike any I have encountered in role playing.

Kafers are ruthless. They kill all humans without mercy and seem bent on genocide. When observed without contact, humans reported seeing the Kafer leaders beat their troops with something akin to a cattle prod. As combat ensues, these leaders do the same as the Kafer troops fumble and seem disoriented. In a few moments, however, the Kafer troops become cunning and dangerous opponents. 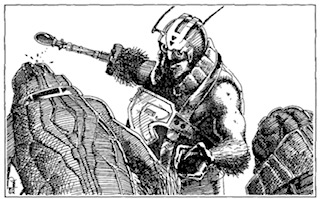 Kafer intelligence increases in response to violence, pain, and stress. Stats in the original 2300AD range from 1 to 20. To resolve tasks, players roll a 1d10 die and add the requisite characteristic and skill number. Routine difficulty tasks require a roll of 7 or better to succeed. Difficult tasks require a roll of 11 or better. For standard infantry Kafers, their starting Intelligence characteristic at the beginning of combat is 2. However, after the 1d6 turns, that rises up to 12.

When combat occurs, the referee should stress the confused way that Kafers mill about for the first several rounds, their officers prodding and beating them. Once the Kafer intelligence mechanism takes effect, however, the referee should stress the almost supernatural cleverness of the response. Kafers will disappear into available cover and use every trick conceivable in counterattacking. 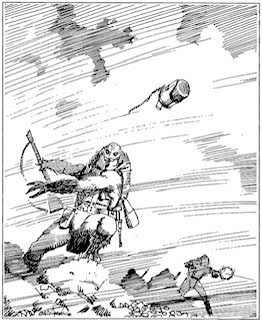 Now, if a Gamemaster’s players are new to 2300AD or are not meta gaming, any first encounter with the Kafers will provoke responses of confusion and perplexity. “Wait, those guys weren’t doing much. But what happened?”

The creators of the the game went to extensive detail in the Kafer Sourcebook to explore the roots of this Kafer intelligence phenomenon. In brief, the Kafers evolved from scavengers on their planet. Certain ancestors possessed an intelligence response not unlike the adrenal response in humans. These survived and evolved into the modern Kafers. Long-term intelligence is a different beast than short-term temporary intelligence.

Retaining information, especially abstract concepts such as mathematics, is quite different from using it. Kafers at their base intelligence level might know the Kafer equivalent of Planck’s Constant (necessary for understanding quantum mechanics and, hence, stutterwarp theory) and might even be able to quote the equation, but they would be utterly incapable of using that information in any meaningful way. 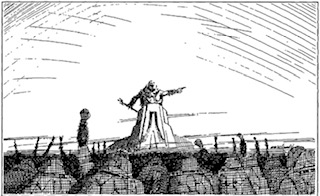 Every short-term increase goes away, but long-term intelligence increases just a little. Repeated stress, pain, and violence allows Kafers to develop intelligence equivalent to human levels. Stop the stress and violence, and Kafers revert to their baseline state.

Kafer history for millennia was a cycle of Kafer barbarian tribes undergoing pressures of violence and stress and building cities. Those city-states would descend back into basic levels of intelligence after a time. In turn, new more intelligent barbarians toppled those cities and civilizations to raise their own.

This cycle ended about 1500 years ago when the legendary Kafer Striker of Stars integrated violence into the culture. Hunts, feuds, duels, and a less deadly but nonetheless important “fight-for-fun” or vakach* were ritualized and became a core foundation for long-term intelligence in Kafer civilization.

If players in a 2300AD game are able to observe Kafers outside of combat, they will witness these activities. The brutality of it will be shocking and hard to understand. What the game provides is an alien species whose level of technology and civilization is 100% dependent on violence and pain along with an innate foe and mystery.

As with the Alien xenomorph, no quarter is given. No effort is made to engage in dialogue. It wants to kill the players. Terrifying, but the options are more around human survival (and about overcoming human greed as it relates to technology found, derived, or exploited from the Alien). The Kafers are a civilization. They can be captured. They will capture humans (but their interrogation methods presume a level of violence is necessary for the poor human to be smart enough to respond). Kafers strategize and organize. Their methods are brutal, and they must finally be defeated in combat, but how they operate and function is a compelling tale that can occupy multiple gaming sessions.

The combination of a vicious and merciless enemy, a perplexing and mysterious species with a strong contextual background, and a path for uncovering that mystery without either abject terror or killing everything on sight make the Kafers the best villainous alien in tabletop role-playing games that a I have encountered to date. Many will debate me, I’m sure, but give the Kafers a try. If you are not playing 2300AD in its original or Mongoose versions, you can adapt them into other games with tweaking some tweaking. Enjoy the responses of the players as they sort out how best to deal with the Kafers.

Patrick Kanouse encountered Traveller and Star Frontiers in the early 1980s, which he then subjected his brother to many games of. Outside of RPGs, he is a fiction writer and new convert to war gaming. His last post for Black Gate was Running Networks in the World of Android: Shadow of the Beanstalk. You can check out his ongoing, play-by-post, referee-less Traveller game at basiliskstation.blogspot.com. Twitter: @patrickkanouse. Facebook: www.facebook.com/patrickkanouse

I recall my friend bought this game circa 1992. We rolled up characters and were really excited to give it a crack but for whatever reason never got further. He was adamant the game was superior to other contemporary items at the time – that we had access to that us. Megatraveller, West End Star Wars, Mechwarrior, Legionnaire (renegade legion) etc. Pity we never got to play, I think coming up against these guys would have been quite interesting

Thanks for reading! I think it is a game that never got its due. The setting is really awesome. The Kafers, well–you know how I feel. I’m glad Mongoose brought it back, and I know they’re planning on an even newer version based on the Traveller 2E rules they have, which I’m a big fan of. I’d add in things like hit location and other things from the Traveller Companion to give it a bit more of a hard scifi edge.

Alas and alack! The Kafer were a major source of my discontent with 2300AD. I started with the first edition (still called Traveller:2300) and I loved the Aurore Sourcebook, one of William Keith’s very best RPG publications. But, the introduction of the Kafer in that Sourcebook just dooms the fascinating colonial situation to non-sustainability (after the vital power satellites are destroyed). So, the Kafer just spoiled my party too much for me to want to invite them back for other affairs. And then they invaded all the rest of 2300AD (seemingly).

Maybe what sums up my unhappiness was going from a game with the subtitle “Mankind Discovers the Stars” to one subtitled “Man’s Battle for the Stars”. I was more into exploration than combat, I guess.

Eugene, I can certainly understand how the Kafers can overwhelm an exploratory-oriented game. I’ve always kept them as a sideline. An ominous threat lurking around, with occasional encounters. 🙂

Hi Patrick – Like you I found the Kafers hugely under rated as an Alien species. They weren’t just humans in rubber suits – they were truly alien.

All of 2300 AD was very well thought and put together but my friends and I mostly used the source books as material for our classic Traveller campaign. The Kafers displaced the Zhodani in out Third Imperium. We didn’t use Psionics so the Zhodani didn’t really fit.

Thanks for the comment! That’s great what you did with that material. I have the Kafers has a mysterious invader in my Traveller universe. 🙂