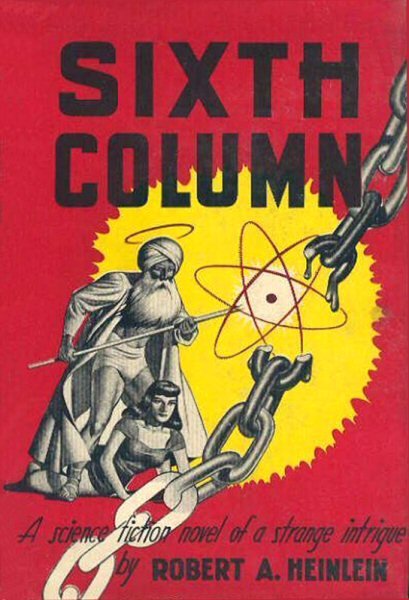 Sixth Column was the earliest novel-length work by Robert A. Heinlein, though it was serialized in Astounding magazine (Jan, Feb, and March 1941, under the pseudonym Anson MacDonald) and not published in book form until 1949, by which time three or four other Heinlein novels had been published as books (Rocket Ship Galileo (1947), Beyond This Horizon (1948), Space Cadet (1948), and perhaps Red Planet, also 1949).

First published in hardcover by Gnome Press under the magazine title Sixth Column (adding the subtitle “A Science Fiction Novel of Strange Intrigue”) it was reprinted for many years in paperback by Signet under the blander title The Day After Tomorrow (a 7th printing with a Gene Szafran cover is shown below, along with the 2012 Baen edition I’ve read for this review). The book isn’t long; 174 pages in the Baen edition, 144 with Signet’s tinier print. 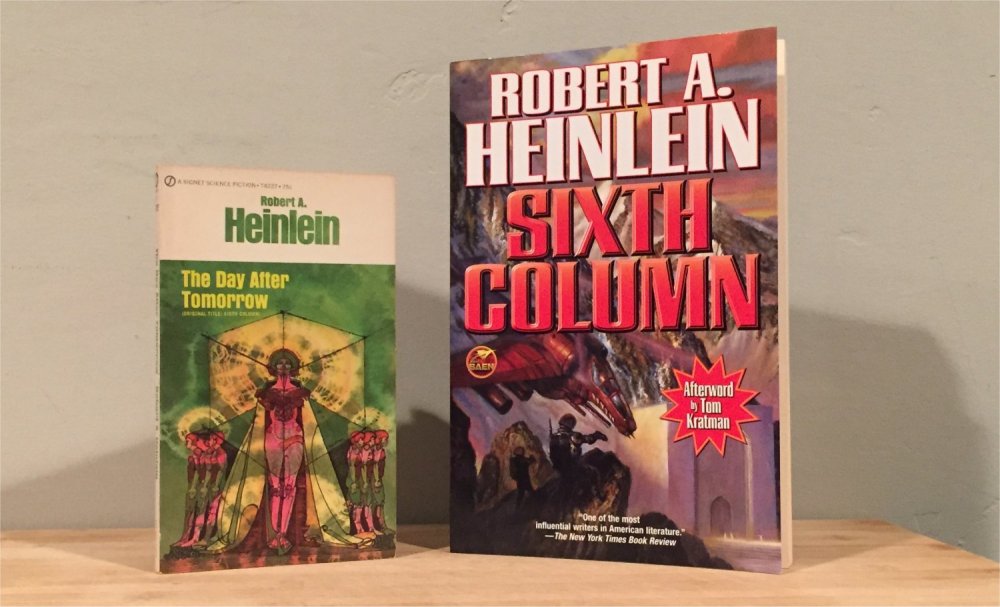 The retitled The Day After Tomorrow, Signet 7th printing circa 1971, cover by Gene Szafran;
Baen’s 2012 edition, cover by Bob Eggleton

It wasn’t Heinlein’s first fiction long enough to be serialized in multiple issues of a magazine; the novella “If This Goes On—” appeared in Astounding a year before, in Feb and March 1940, and later included as the anchor story in the collection Revolt in 2100 in 1953. (I posted about that on my blog four years ago.) In both cases there are suggestions that the works were expanded for book publication, but I can’t find any specific documentation of that, nor do I own the original magazines that published these stories to check that out for myself. Also, some sources call “If This Goes On—” a novel, but it was never published as a separate work.

The United States has been conquered — apparently sometime in the future of the author writing in the early 1940s — and occupied by PanAsians. At a secret research center in the Rocky Mountains, an internal experiment has killed all but six men. Those six refine the experiment to create a device with various miraculous effects: vortex beams, tractor beams, and the ability to kill people selectively by race. They set up a phony religion to fly under the radar of the occupiers, gather recruits and spread to numerous cities, and use various strategies to humiliate and defeat them.

Despite its Deus ex Machina plot (relying on the amazing effects of an invention) and a racist depiction of Asian invaders, this is fairly riveting story that fulfills its improbable premise: to show how six Americans, albeit with virtually magic powers, can defeat an invading occupation force.

Summary with some comments [[ in brackets ]]: 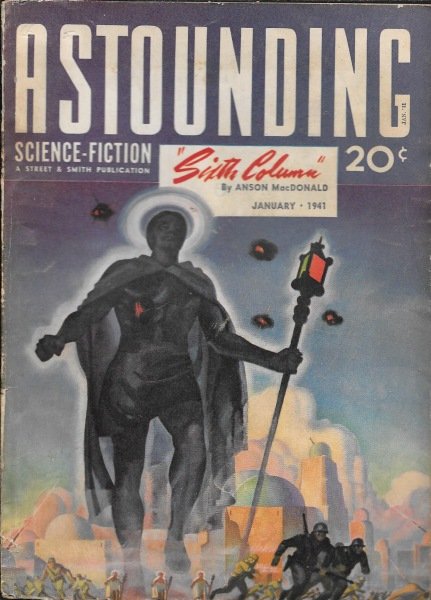 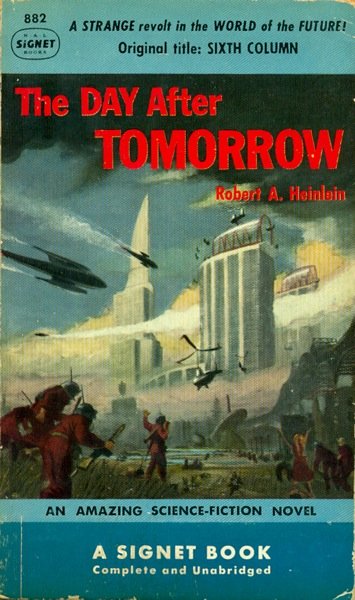 Earliest Signet edition of The Day After Tomorrow,
1951; cover by Stanley Melzoff 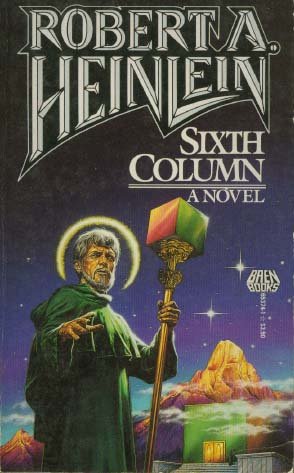 Heinlein could always turn a phrase; his characters frequently speak pithy aphorisms and challenges to conventional wisdom. (In way none of his peers of that era, Asimov or Clarke or Hubbard, did. Heinlein was more worldly than any of them.) Page references from the 2012 Baen edition.

Not the place to start for anyone new to Heinlein, of course. It’s a good read given the stipulation that Heinlein was reflecting attitudes of his era, and as an example of a pulpy plot driven by wish-fulfillment technology. Its significance in terms of his career is to see the kinds of political, social, and religious positions he expressed, in anticipation of those themes in later works.

An earlier version of this post originally appeared at Views from Crestmont Drive.

Mark R. Kelly’s last review for us was Needle by Hal Clement. Mark wrote short fiction reviews for Locus Magazine from 1987 to 2001, and is the founder of the Locus Online website, for which he won a Hugo Award in 2002. He established the Science Fiction Awards Database at sfadb.com. He is a retired aerospace software engineer who’s lived almost his entire life in Southern California. Find more of his thoughts at Views from Crestmont Drive.

The older I get, the less I enjoy Heinlein. The preaching and obvious manipulation of the plots makes it harder to maintain a sense of suspended disbelief.

I admit to the same. fh.

Mind you, there’s also a strong nostalgic component to Heinlein for me. But still.. I haven’t read a Heinlein novel in the past 20 years.