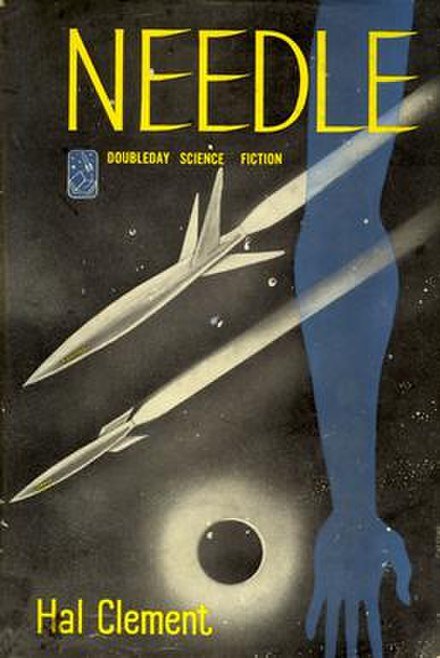 Hal Clement (legal name Harry Stubbs) was one of the stable of science fiction writers developed by John W. Campbell in the pages of Astounding magazine in the 1940s. His first story was “Proof” in the June 1942 issue and his next 10 stories appeared in the magazine throughout the ‘40s. He’s most famous for the 1954 novel Mission of Gravity and his reputation rests on its sort of hard science fiction: alien environments rigorously extrapolated from known physical principles. (Others in this vein were Iceworld, 1953, and Cycle of Fire, 1957.)

His first novel is a little different. This is Needle, serialized in Astounding and expanded to book form the following year for Doubleday. And published, incidentally, as a juvenile, in the “Doubleday Young Moderns” series, despite, as SFE notes, certain themes. (The edition I’m reading, and using pagination from, is a 1974 trade paperback reprint in Avon/Equinox’s SF Rediscovery series, with an odd cover illustration depicting two Greek-like gods fighting in the clouds. Photo below.) 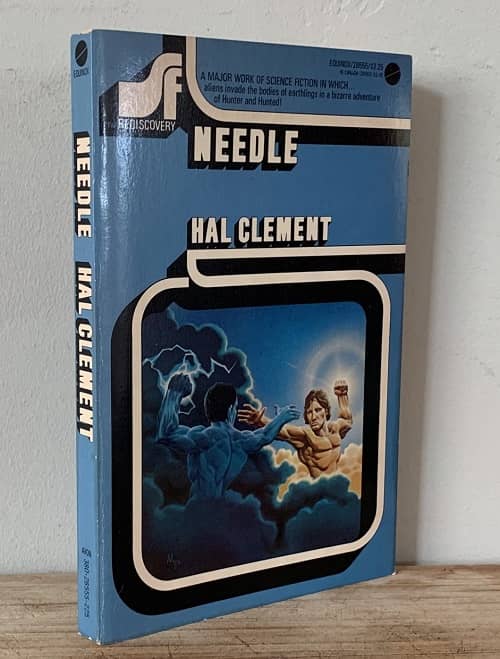 The premise is that a good guy alien, Hunter, is pursuing across space a bad guy alien, Killer, and they both emerge from FTL in their separate ships near Earth and crash into the ocean just offshore of an island near Tahiti. The aliens are symbionts and must inhabit other bodies to survive. Hunter occupies a 15-year-old boy lying on the beach, makes himself aware to the boy, and together they engage on a detective hunt to identify what other person, on this small island, is harboring the fugitive Killer. It’s like searching for a needle in a haystack — except that the needle is disguised as a piece of hay.

This is a decent mystery/detective story, in that a quarry must be found, various likely candidate hosts are identified, and circumstances eliminate some or suggest others, until the resolution uses clues we likely haven’t noticed to identify a previously unsuspected suspect. The greatest flaw is that the stakes are arbitrary — the bad guy is bad because we’re told so — while apparently the symbionts are if anything beneficial to their hosts, not harmful. What would have happened if the quarry hadn’t been found? Nothing at all, apparently. It’s a matter of alien justice, only.

I was reminded somewhere recently that one way of thinking about a story is to consider, what are the stakes? Why should we care? And so my problem with this story is why there is such urgency to find Killer and remove it from its host. We gather that Mr. Kinnaird was never aware of hosting an alien; nor have we been given any reason to think the alien Killer has been manipulating the human to carry off some evil plan. We haven’t even been told that Killer at any time killed anyone; his name begs his evil status. (Or did I miss something?) What was the problem with both Hunter and Killer remaining in their hosts? If anything, these symbionts are beneficial to their hosts, in that they can protect their hosts from bodily injury.

Credit given for Bob’s having the presence of mind to wonder if Hunter is telling him the truth about who he and his quarry are. Mightn’t Killer tell Mr. K an identical story, or some cover story to justify his presence? Yet, though we suspect once or twice that Mr K is aware of, or being manipulated by, his symbiont, we gather by the end of the book that he was entirely unaware of his invader. (I noted a line on page 127, which I thought might be foreshadowing, as Mr. K observes his son Bob napping: “Mr. Kinnaird approached silently and looked down at the boy for some time with an expression that defied interpretation.” Perhaps this is just haphazard omniscient narrative from Clement.)

The endless details about the geography of the island, how the boys move back and forth across it, get wearying. You have the impression the author lived on such an island and is using it exactly as the model for the nameless island in this book. (Though the bios at SFE and Wikipedia indicate no such connection; Clement spent WWII in Europe.) And the author also seems to know a lot about industrial construction!

I should note that Clement wrote a sequel years later, Through the Eye of a Needle (1978), which I’ve not read. So perhaps he addressed some of these lingering issues there.

Despite a couple gaps in plausibility, this is a good example of Campbellian era problem-solving science fiction. Situations are set up, and problems are introduced that must be solved within the constraints of the situations. How does Hunter establish contact with the human he is occupying? How do they find who’s hosting Hunter’s quarry, with no way to tell externally, only by circumstance? This is the kind of story that invites the reader to solve these problems before the characters do, as in any good mystery novel.

Mark R. Kelly’s last review for us was Earth Abides by George R. Stewart. Mark wrote short fiction reviews for Locus Magazine from 1987 to 2001, and is the founder of the Locus Online website, for which he won a Hugo Award in 2002. He established the Science Fiction Awards Database at sfadb.com. He is a retired aerospace software engineer who’s lived almost his entire life in Southern California. Find more of his thoughts at Views from Crestmont Drive.