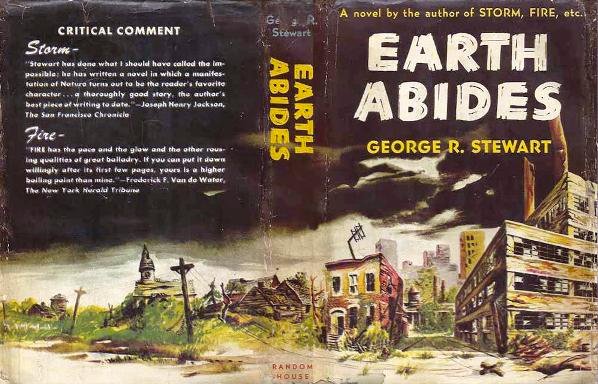 Here is one of the best science fiction novels of all time. It’s about the entire world, and implicitly the entire human race, and it’s as timely as ever as, for one reason or another, humanity faces the realization that its indefinite survival on planet Earth is not guaranteed.

The novel is Earth Abides by George R. Stewart. It was published in 1949 and was Stewart’s only SF novel (though he wrote a couple earlier novels about natural catastrophes, including one about a storm that inspired the US National Weather Service to give storms names). It won the first International Fantasy Award in a year preceding the advent of the Hugos. (Stewart never wrote any other science fiction, and this novel wasn’t published as science fiction, but was later embraced by genre critics, much as the famous novels by Huxley and Orwell were.)

Above is the cover of the first edition. And here are the two editions I’ve read, a 1971 Fawcett Crest paperback with a Paul Lehr cover, and the 2006 Del Rey trade paperback edition. 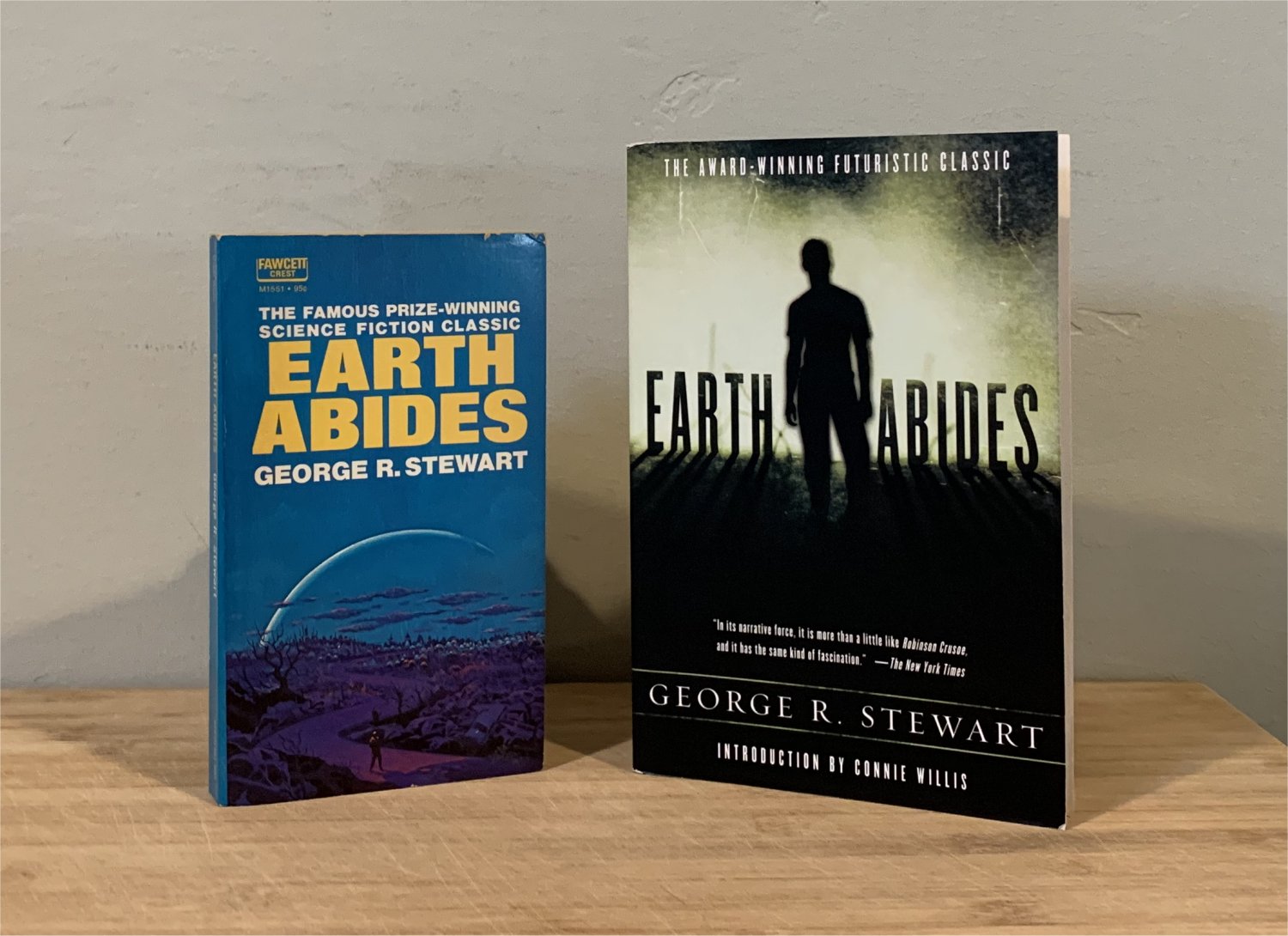 Earth Abides is about the aftermath of a worldwide plague that kills off virtually all of humanity, all but a tiny number of people who are naturally immune. We gather this number might be a dozen or two in any large city. It follows one particular character, Isherman Williams, Ish, as he returns to his city, which happens to be Berkeley, California, from a stay in the mountains, and discovers that the world seems deserted.

That is, the story begins after the initial catastrophe is mostly over, the part of it presumably involving mass panic and people dying in horrible ways. In this way it resembles similar stories, like John Wyndham’s The Day of the Triffids or the debut episode of The Twilight Zone, “Where Is Everybody?” (and numerous others I’m sure; there was a Martian Chronicle like this too), which invites the personal fantasy of having the entire world to one self, and the temptation of imagining what to do with it, despite the growing panic of not knowing how the world got this way.

The book then follows the rest of Ish’s life. And it does so in varying manners of scope and pace in a way that gives the novel a multi-dimensional impact.

Here’s a bulleted summary with comments indented one tab.

In a 345-page book (I’m using the pagination of the 2006 Del Rey trade paperback edition), the first part, “World Without End,” is 127 pages. It follows Ish from day to day as he realizes what has happened and starts to make a new life for himself.

Throughout the book are italicized passages that reveal what has happened outside of Ish’s experience — mostly about what is happening, or will happen, to the world at large, without humanity’s maintenance or interference.

The opening lines of the book are one of these passages, page 3: “…and the government of the United States of America is herewith suspended, except in the District of Columbia, as of the emergency. […] The West Oakland Hospitalization Center has been abandoned. Its functions, including burials at sea, are now concentrated at the Berkeley Center.” And so on.

Page 8: An encyclopedic passage about how populations of animals fluctuate, expanding until being struck by plague. Page 10: How a rodent on Christmas Island went extinct.

Then numerous passages about how the world as maintained by humans will deteriorate. About how pet dogs will die in their houses or merge with their wild counterparts. About how cats will die in their houses or not survive contact with wildcats. About grasses and flowers, gardens withering untended. What will happen to various livestock. Later, how the city decays, how cars will decay. In these we see how the Earth itself is as much a character in this novel as is Ish, as Connie Willis points out in her introduction to this edition. And these passages anticipate Alan Weisman’s striking 2007 book The World Without Us, which remorselessly describes how the artifacts of humanity will decay in days, years, and thousands of years after humanity’s hypothetical disappearance.

The farthest perspective is this from page 17:

High overhead, moon and planets and stars swung in their long smooth curves. They had no eyes, and they saw not; yet from the time when man’s fancy first formed within him, he has imagined that they looked down upon the earth.

And if so we may still imagine, and if they looked down upon the earth that night, what did they see?

Then we must say that they saw no change. Thought smoke from stacks and chimneys and campfire no longer rose to dim the atmosphere, yet still smoke rose from volcanoes and from forest fires. Seen even from the moon, the planet that night must have shown only with its accustomed splendor—no bright, no dimmer.

Stewart then shifts into fast forward mode to show what happens to Ish and Emma and others they meet, over the next 20 years, in 19 pages.

This middle section is the longest in the book, running from page 147 to page 304. Having employed three different narrative strategies, from the Stapledonian to the single point-of-view, Stewart now focuses on a single dramatic year in the lives of Ish and his kin.

The epigraph to this section, on page 147, concerns those Europeans who (in the early settlements of America) defected from their settlements to become Indians, while no Indians left their villages to settle with the Europeans. Exactly the same point was made in Sebastian Junger’s 2016 book Tribe to try to understand why “primitive” society is, to many, so much more attractive than “modern” society.

The events of this year:

There are several in this section too, some of them thoughts about human society that might well be Ish’s:

Notes and other quotes

The quibble is about Del Rey’s cover blub: “The Award-Winning Futuristic Classic.” There’s nothing futuristic about this novel; it’s set in the author’s present and was published in 1949, and the events in it could easily happen now as then.

Of course, this novel is science fiction because science fiction isn’t merely about speculative futures; science fiction is about the humanity’s place in and understanding of a presumably comprehensible universe that objectively exists independent of human desires and motivations. And in the balancing of its portrait of human nature as expressed in its characters and emerging new culture, with the depiction of a planet that is bound to endure whether humanity survives or not, Earth Abides addresses this broadest project of science fiction as well as any novel I know.

This article originally appeared at Views from Crestmont Drive.

Mark R. Kelly’s last review for us was The Early Asimov by Isaac Asimov. Mark wrote short fiction reviews for Locus Magazine from 1987 to 2001, and is the founder of the Locus Online website, for which he won a Hugo Award in 2002. He established the Science Fiction Awards Database at sfadb.com. He is a retired aerospace software engineer who’s lived almost his entire life in Southern California. Find more of his thoughts at Views from Crestmont Drive.

I really must get around to reading this novel. There is one listed on a local eCommerce site i frequent, at a very reasonable price, but I simply cannot bring myself to buy it due to cover are not being my cop of tea. It is the Black Swan Eduardo Paolozzi art edition. I suppose I will just have to Abide until I can find an Ace, Corgi or Fawcet edition

This was a hugely influential book for me. I can trace a straight line starting with EARTH ABIDES, to FARNHAMS FREEHOLD, to ALAS BABYLON and THE STAND to my own shot at an apocalyptic novel, SUMMER OF THE APOCALYPSE.