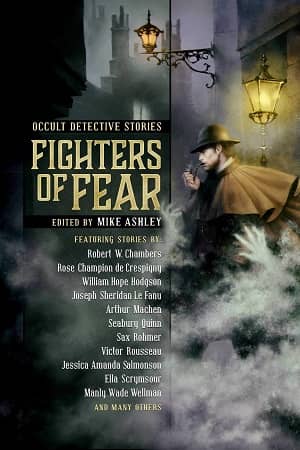 His latest is Fighters of Fear, a collection of 31 classic occult detective tales from Arthur Machen, Robert W. Chambers, William Hope Hodgson, Victor Rousseau, Sax Rohmer, Seabury Quinn, Henry S. Whitehead, Manly Wade Wellman, Joseph Payne Brennan, Jessica Amanda Salmonson, and many, many others — including a handful that have never before been reprinted.

It’s a fat 624-page volume that belongs in the library of every serious fantasy fan, and it’s easily one of my most anticipated volumes of winter. It got a starred review from Publishers Weekly, pretty much unprecedented for a collection of generally obscure, mostly 19th Century genre fantasy. Here’s a snippet:

Ashley… has never been better in conveying his genre expertise than in this impressive assembly of 31 short stories featuring psychic or occult detectives from the mid-19th century (Joseph Sheridan Le Fanu’s “Green Tea”) to the late 20th century (Jessica Amanda Salmonson’s “Jeremiah”). While usual suspects Arthur Machen and William Hope Hodgson are deservedly included, the volume’s real value lies in its introducing fans of those writers to more obscure authors, such as Max Rittenberg, whose “The Sorcerer of Arjuzanx,” concerning a possible case of bewitchment at Lourdes, makes the case that his consulting psychologist, Xavier Wycherley, merits having all his stories republished. And few setups are more tantalizing than Victor Rousseau’s “The Woman with the Crooked Nose,” in which a man consults a doctor after seeing a ghost resembling a dead woman in every particular, except that it has a straight nose, unlike the deceased.

Fighters of Fear will be published in trade paperback in two weeks. Here’s the complete description and Table of Contents.

Here’s the publisher’s description for Fighters of Fear.

Since the gaslit nights at the end of the nineteenth century, the occult detective has been a beloved and recurring archetype. Mixing the best aspects of the detective tale and weird or supernatural fiction, and capitalizing in part on the massive popularity of Sherlock Holmes, these stories portrayed men and women pitted against surreal and horrifying foes, usually with little to defend them but their own savvy, experience, and know-how.

From William Hope Hodgson’s Thomas Carnacki, to Seabury Quinn’s fearless Frenchman Jules de Grandin, to Jessica Salmonson’s Penelope Pettiweather, the occult detective has taken a variety of forms, investigated a wide array of supernatural and otherworldly cases, and entertained generations of readers. This new collection compiles thirty-one all-time classic occult detective stories as it traces the genre’s growth from its nineteenth-century origins to the late twentieth century, showcasing the work of acclaimed pioneers of weird tales alongside cult favorites and exciting modern talents.

So, step into the shadows, join us on this journey into the dark, and become a fighter of fear . . .

See all our recent coverage of the best upcoming SF & fantasy here.

I love books like this! I’m ordering it Right Now!

Enjoy! I’m especially interested in some of the authors that are new to me, like Sydney Horler and Amelia Reynold Long.

Heck Yes! this sounds right up my ally. hope to find some gems and follow some new writers.

I hope you find several! Are you familiar with most of the writers? I’m surprised (and intrigued!) to see that half the TOC is unknown to me including: