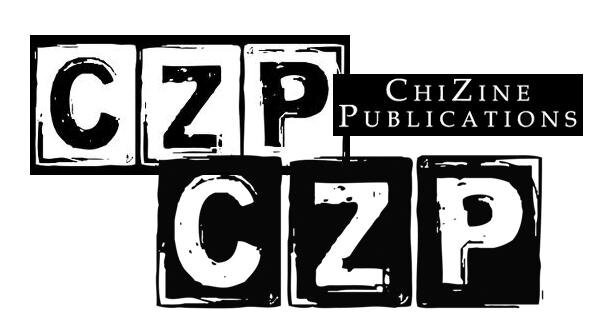 I’m sure many of you by now have heard of the sudden controversy that erupted around Canadian horror/speculative fiction publisher, ChiZine. The story has been picked up by Victoria Strauss of Writer Beware. You always know it’s bad when Writer Beware gets involved. For those of you who are blissfully unaware of the situation, good for you. Stay that way if you can. If you insist on knowing it all, I can recommend a great round-up by High Fever Books (here). Start at the bottom and work your way up through the updates.

For the most part, there has been an outpouring of support for those affected; the authors who were not paid, and the former staff who were so atrociously abused. As with all controversies, however, there have been a number of bad takes. The worst has come from an editor by the name of Stephen Jones, who had this to say: 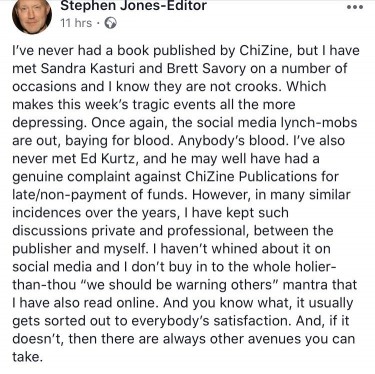 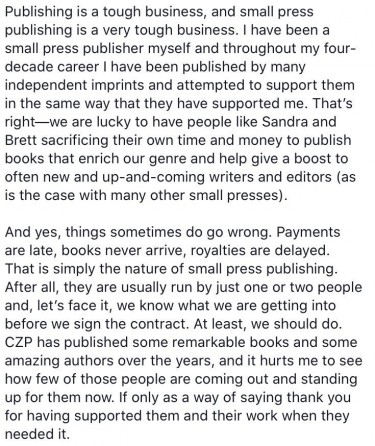 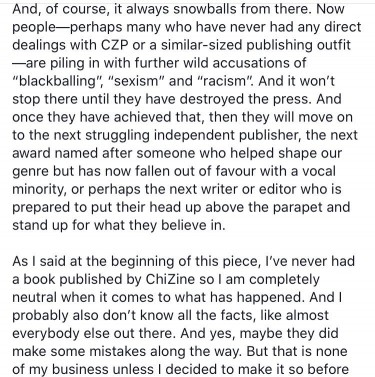 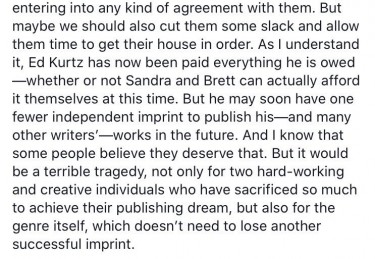 To be perfectly clear, this is a bad take. It’s a terrible take. The worst possible take in the history of takes.

First, and by no means the most important, no one takes pleasure from the collapse of one of Canada’s (supposedly) shining stars of independent publishing. I mean, almost no one. I can imagine that several of the victims might be feeling some sort of vindication watching the press crumble as it is. I think if I were one such victim, I’d be pretty happy to see the truth come out and the perpetrators start to feel the consequences of their horrid actions. I can’t speak for them of course, but I’m fairly sure my black little heart would not be sad to see it. But us outsiders? We’re not thrilled this is happening.

ChiZine was a bright star for us. It was a source of pride for the Canadian scene; a publisher that, to the outside eye, looked successful and was promoting Canadian authors and content. It was brilliant. We’re not happy to learn that it appears much of their success was, in fact, a lie, made possible through campaigns of exclusion, fear, and manipulation, and possibly even financial fraud. 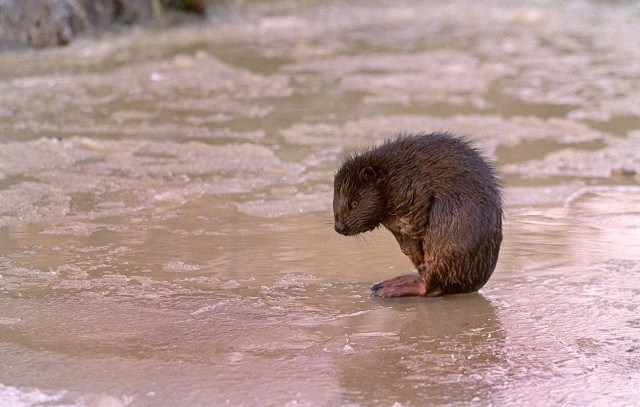 There are worse thoughts in Mr. Jone’s post, however, than the accusation that ordinary Canadians in the speculative fiction scene are gunning for independent press blood. The idea that an organisation is too successful to be challenged for utterly immoral behavior is a pernicious lie that seems to permeate through almost all of society. Canadian publishing is sadly, it seems, no exception.

Let me be absolutely clear on this issue, no one and no organisation is too big or too successful to be held to account for their misdeeds. No organisation, no matter how successful, is worth more to any scene than the people who exist in it. It is absolutely inexcusable to let an organisation, or a person, for that matter, off the hook for horrific behavior simply because they’re a big name. It’s not on. It will not do. Ever.

Furthermore, an organisation is absolutely not successful if it fails to uphold its obligations to the people responsible for its appearance of success. If a publisher cannot or, as it seems in this case, does not pay its authors, it is not a successful publishing house. If a publisher fails to pay its staff, then it doesn’t matter how many books it can churn out in a given year, it is not successful. The appearance of success is not the same thing as actual success. You would think this is an obvious point, but it has escaped the likes of Mr. Jones and the other ChiZine supporters who are using the same argument.

Here’s the thing, like the felling of a tree in the woods brings light to the forest floor, permitting the trees beneath to reach to the sky, any independent publishing house collapse grants the opportunity for other small presses to reach up and gain new heights. There are other Canadian small presses, ethical small presses, who are awaiting discovery by readers who loved ChiZine’s line up of books. No small press is indispensable or irreplaceable. There are other presses who will fill any void they leave behind. 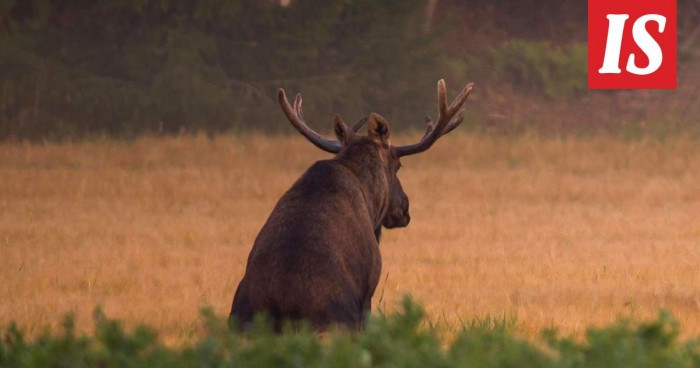 Rightly so, in my opinion.

More to the point, in no way, shape or form must authors, publicists, cover designers, editors, formatters, and administrative staff of any small press ‘expect’ non-payment, consistently late payments, lack of communication, and a toxic work environment. There is no world where that should be an acceptable standard for doing business. Yet there are people who claim that such is the cost of publishing with a small press.

Please excuse my language when I say horseshit.

That is not the cost of publishing through a small press. It is unacceptable. We need not accept it. We should call it out every chance we get. We should take any press to task that tries to claim that is that case, as well as any of the folks who try and support that ridiculous argument. It’s absurd.

Lastly, I want to give any folks published by small presses, who’ve loved their experience with their press, a chance to sound off, just to prove that small presses can and are ethical and legitimate businesses. I’ll start.

Both my most recent books, Skylark and Daughters of Britain were published through Renaissance Press, a local press (to me) whose focus is on publishing marginalized (neuro-diverse, queer, and minority) Canadian voices. I’ve never had a cause for concern regarding royalty payments, have always received royalty statements, and don’t feel as if I am ever without a voice should I have any concerns. I’ve had such a lovely time working with them, that I intend to sell my entire self-published back list to them. They’ve already acquired Sky Road Walker.

Now it’s your turn. Which small presses have you loved working with, whether you’re an author or otherwise associated with them?

To finish, here’s a pretty picture to cheer us all up. 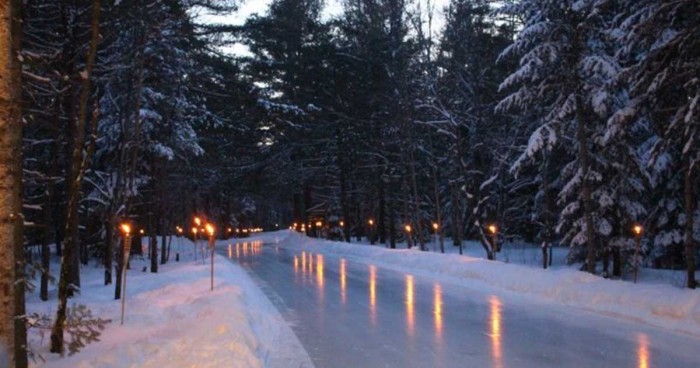 A torch-lit skating trail through Arrowhead National Park. The stuff of fairy tales.