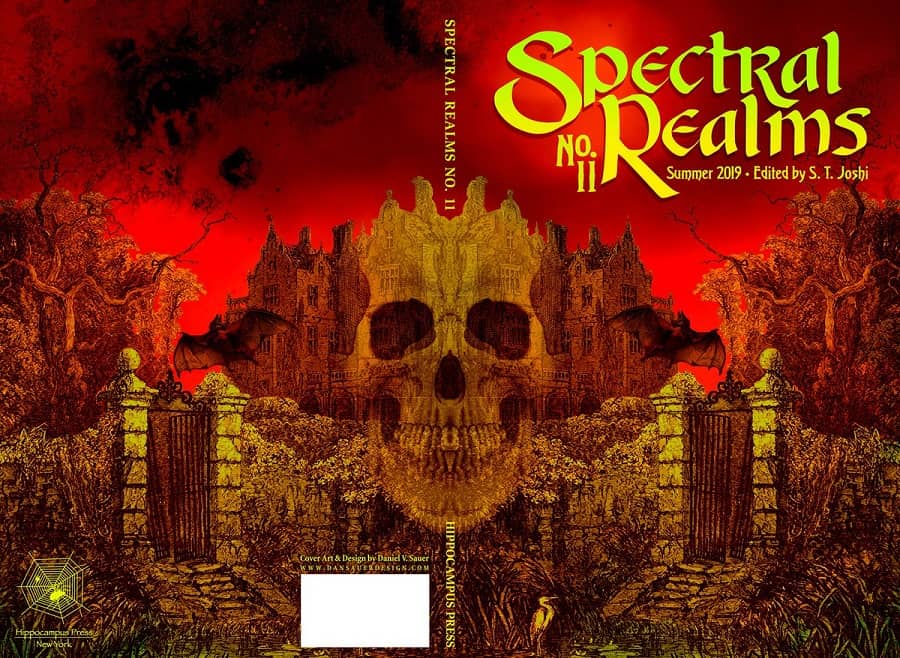 Spectral Realms magazine is a square-bound journal of weird poetry, reviews, and articles launched in 2014 and published twice yearly by S. T. Joshi — the field’s foremost scholar, writer, advocate, and critic.  If ever there was a man who should need no introduction, Mr. Joshi is he — 300+ books to date and counting. An avowed rationalist, rapier-witted satirist (in the savage tradition of Bierce, Twain, and Mencken), and sometime crafter of his own macabre tales, S. T. Joshi bestrides the entirety of weird fiction like a colossus. His error-corrected drafts of the writings of H. P. Lovecraft, Clark Ashton Smith, Arthur Machen, George Sterling, Ambrose Bierce, Algernon Blackwood, et. al. — produced through an exhaustive and meticulous examination of extant hand-written copy, typescripts, and published versions — serve as the final word on these respective writers’ original aesthetic intentions and lasting literary legacy. To those who know, the words “texts by S. T. Joshi” prominently displayed on a book’s cover assure the discriminating reader that he or she is perusing an author’s truest, error-corrected, “best” published version of any given work.

So it is no small matter when a man of S. T. Joshi’s stature and first-rate scholarship decides to launch a new journal dedicated to the poetic expression and criticism of the weird.

Hippocampus Press announced the inaugural issue of Spectral Realms to the reading public thusly. (I quote the passage in its entirety, as it cannot be improved upon — no better introduction and summarizing mission statement can be crafted):

The spectral realms that thou canst see
With eyes veil’d from the world and me.
—- “To a Dreamer,” H. P. Lovecraft

The last few decades have seen a remarkable efflorescence of weird poetry, to such a degree that we can authentically state that a renaissance of the genre is underway. Hippocampus Press has always been committed to this most rarefied mode of expression, and now Spectral Realms, published in Summer and Winter, leads the way. 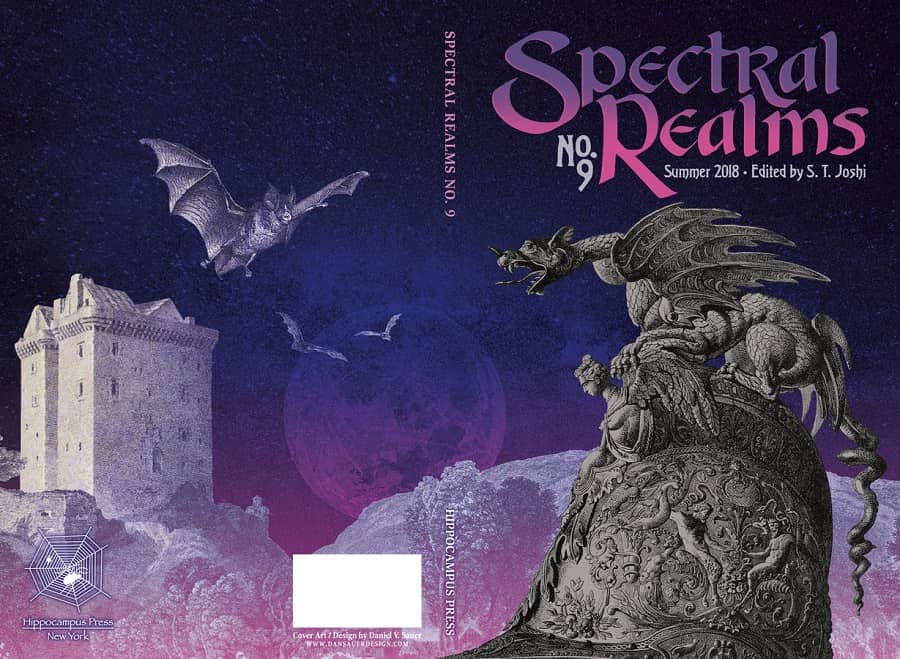 The contributors in this first issue, hailing from the United States, Canada, the United Kingdom, Denmark, Australia, and elsewhere, are indicative of the worldwide nature of the weird poetry renaissance. New poets who have emerged in recent years — Ann K. Schwader, Wade German, Leigh Blackmore, K. A. Opperman — join such veterans as Bruce Boston, W. H. Pugmire, and Richard L. Tierney in contributing vital original work to this issue.

In addition to publishing new, original poetry from modern practitioners,  Spectral Realms also resurrects classic poems from prior ages as one component of its educational function; another component is the inclusion of essays on weird poets or on topics related to the field and reviews of contemporary work, whether it be volumes of poetry, anthologies, works of criticism and scholarship, or other volumes of ancillary interest.

Spectral Realms hit the publishing industry like a thunderclap. It has been enthusiastically received by its stable of contributing poets, aficionados of the weird, and critics alike. The quality of the materials used in its manufacture make a statement in themselves: the transfixing, ofttimes lurid, hyper-stylized, and surrealist jacket art (the stunning wrap-around cover of issue #11 done by Daniel V. Sauer); the craftsmanship and durability evident in the periodical’s square-bound format (this one is meant to last, folks), the elegant-margined typesetting on acid-free paper. These details highlight and showcase the outré writings within. Each issue packs a potent punch: primal screams of terror, existential dread, and mind-numbing horror — leavened with the much-appreciated occasional comedic piece that startles one into surprised laughter. (Or as Stephen King has wryly noted, in another context of the serious-minded writer and his or her sense of humor: “Please God you have one.”)

Spectral Realms publishes a variety of poetic forms: sonnets, ballads, rondines and rondels, villanelles, ekphrastics, etc.  — interspersed with the odd ode, haiku, or pantoum — though please note free verse shoulders its way into this heavily traditionalist journal as well. In addition, prose poems are frequently featured. Articles and reviews on the writers and works that have stood the test of time can be found within, as well as enlightening commentary and criticism directed at living proponents of the weird who are even now breaking into the ranks of “The Greats.”

I’d like to highlight some the poems proffered in Spectral Realms #11 for your shivery delectation, quoting a line or two from various pieces, that you might gain a better sense of the journal’s editorial direction and overall aesthetic affect.

The issue opens with a poignant in memoriam work: The Tomb of Wilum Hopfrog Pugmire, written by Wade German (whose poetry has been nominated for the Pushcart, Rhysling, and Elgin Awards) and dedicated to the recently departed:

In some strange hollow fearful minds defame,
The sentinels of Sesqua keep the path;
One reaches it through circles of black math
To find the obelisk that bears his name.

Bram Stoker and Best Horror of the Year: 2019 (three poems nominated by Ellen Datlow!) award winner Christina Sng contributes poems, one of which —  The Monsters Within — chillingly  declares: “Today I see you / wearing my face . . .”

Manuel Perez-Campos — whose work another  Spectral Realms poet, Manuel Arenas, has termed “decadent and belletristic” — contributes three poems to the issue.  On Gustave Moreau’s Canvas “The Apparition” contains this bit of delightful euphonious description which elicits an awed “pretty whistle” from the ranks of the approving: “Garbed in lithe gossamer of twilit azure . . .”

In the eerie, deftly executed Solving for Planet X, Grand Master Science Fiction Poetry Associate and accomplished, fiercely intelligent master of multiple literary forms Ann K. Schwader opens with, “So now our wise astronomers deny / a need for Planet X,” only to note uneasily later in the poem, “. . . dreams insist / upon a whisper of crustacean wings / above the Yuggoth hives . . .”

The Great Frank Coffman (how else to describe the man and his work? — retired professor of college English and creative writing and author of numerous poems, short fiction, and scholarly essays; founder and moderator of the Weird Poets Society Facebook group), fashions a rondel of such mythopoeic power and import that one is tempted to throw on Druidical garb, climb atop the nearest Neolithic lintel, and declaim to the gathered, but newly Christianized crowd:

By Lammas the god has ripened corn and wheat;
On Mabon we give thanks and drink and eat;
Dark Samhain lets us peer through Death’s thick haze.
The year’s Great Wheel gives us our Sabbat days.

Spectral Realms regular and award-nominated poet Mary Krawczak Wilson, in Divided by Demons, gifts us a piece of piercing melancholy and drowsy-lidded phantasmagoria:

. . . rare flowers suffused the air
And lulled you far away from there
To an inchoate and arid land. 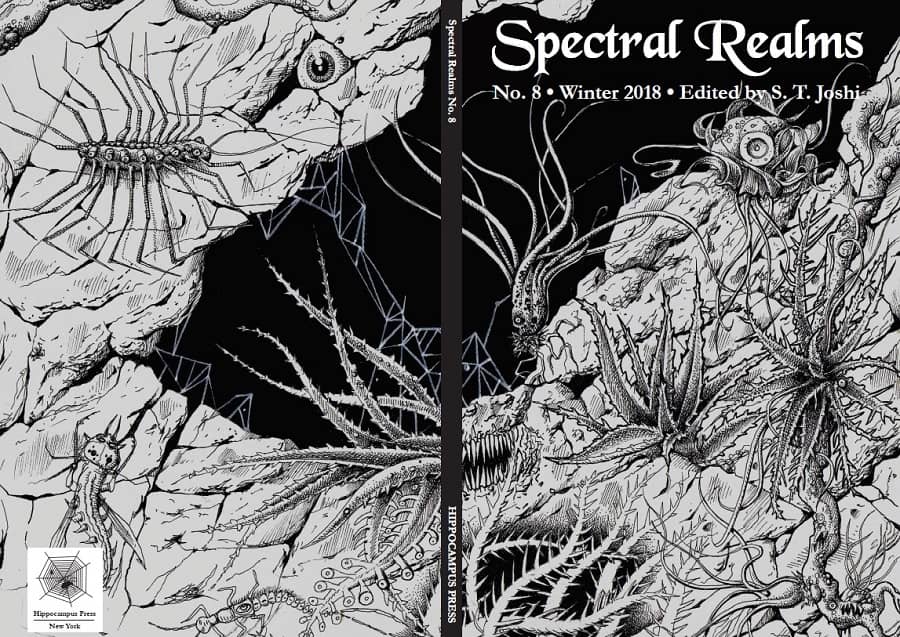 Carl E. Reed (full disclosure: Yours Truly, heh! — in case you missed the name affixed to the beginning of this review, Inconstant Reader) contributes three poems, amongst which is found Black-Tongue Kiss (“a weird and wonderful grim ballad” — S. T. Joshi) whose opening quatrain chronicles:

They buried me in a shallow grave;
I moaned & writhed & cried
out for a mercy the murdering spade
cold blued steel — denied.

Scott J. Couturier is one of the newer voices writing of “the weird, grotesque, perverse, and darkly fantastic,” as his back-of-book bio blurb describes his output. In the opening quatrain of The Necromancer’s Charm, initial sibilants ease us into startling imagery; whilst ensuing fricatives punctuate, underscore, and heighten the incantatory power of the words:

This is poetry as both thaumaturgy and plosive breath control.

British poet and fictioneer Oliver Smith (working on his Ph.D. in Creative Writing) weaves a creepy, tightly knit concluding verse of entwined rhyme and alliteration in his poem The  Fairiest, drawing upon pagan folklore and tradition for its cadenced power and arresting imagery:

And I saw her lying in a cold clay bed,
her body withered in spider web: bound
among hog-backed barrows and ancient vines
whose loom of roots in the damp and gloom
wove weft of bone with warp of tomb.

In the Classic Reprints section at the back of the journal we find the poems Fright, by May Sinclair,

I have been naughty to-day;
My mother sits in her chair,
With the dark of the room and the light
Of the fire on her face and hair

and The Silent House, by Samuel John-Alexander (“Knock! Knock! The door is barred, / Ye are true in watch and ward”).

In Articles we discover part 3 of Marcos Legaria’s “Clark Ashton Smith and Robert Nelson: Master & Apprentice”, which concludes with a recitation in full of Nelson’s epic poem Jorgas : (“O Jorgas, wine and shadows all embrace / Themselves with us and thee in ecstasy.”)

Last — but certainly not least — under Reviews we find Donald Sidney-Fryer’s “A Guidebook for Witches & Warlocks,” which unpacks the joys of perusing Frank Coffman’s The Coven’s Hornbook & Other Poems: Weird, Horrific, Supernatural, Fantastic, Science Fictional, Broadly Speculative, and Traditional. Mr. Sidney-Fryer writes: “The section titles are as evocative as the well-honed verses of the poems themselves.” He goes on to list all fifteen in full — they are indeed eldritch, polysyllabic categorizing mastheads of power and occult import — words to conjure by! I share with you here a good half-dozen:

Other noted contributors to  Spectral Realms #11 include F. J. Bergmann, Tatiana Strange, David Barker, K. A. Opperman, Darrell Schweitzer, Thomas Tyrrell, Ashley Dioses, Ross Balcom — and others. If I were to cite every bit of arresting poetic verbiage cunningly wrought and arranged in this periodical by the aforementioned company of the august and accomplished (such a summarizing description is to be understood as excepting me, people — I’m not that much of a rabid egotist, heh!) we would be here all day.

Better that you buy a copy and peruse its eldritch content yourself. Feel the icy tickling finger of the numinous trace its course along your spine, even as eyes dilate, short hairs prickle, and mouth slackens. Spectral Realms is a heavy opiate, and the cumulative impact of its noon-bright hypnagogic horrors, soporific twilight phantasmagoria, and nightmarish midnight visions prove ecstatic, transportive, and rewarding: an intoxicating mix of the Gothic, the Baroque, and the Romantic. Even as the finest wines and richest chocolates, it is perhaps best sampled in small, palate-cleansing doses — a gourmand’s indulgence with which to throw off the dulling anesthetic of familiarity and quotidian obsessions which stunt the mind and dull the spirit, day-in; day-out.

Current and back issues are available direct from Hippocampus Press, or online at Amazon.com and “other fine booksellers.”

In closing, an invitation: permit me to quote a certain luminous-eyed, caped, charismatic Hungarian actor, star of an old black-&-white film: “I bid you… welcome.”

Our previous coverage of the magazine includes Exploring the Weird through Poetry: Spectral Realms. Order copies directly from the Hippocampus Press website.

Thank you so much for reviewing poetry.

Thanks for all your kind encouragement over the years! We’re still not reviewing enough poetry, but we’re getting there.

What captivating covers! Best of luck with this.

Carl! Made my day to see such a talented old friend is still kicking around in the genre!

@E. E. Knight–Thanks for the top o’ the hat, Eric! I’m like that protesting peasant slung atop the corpse cart in Monty Python and the Holy Grail: “I’m not dead yet!”
Soldier (to cart driver): “He’s very ill.”
Peasant: “I’m getting better.”
Soldier: “No you’re not–you’ll be stone dead in a moment.”

Hells yes. We need to get together on a s̶c̶a̶m̶ ummm . . . w̶r̶i̶t̶e̶o̶f̶f̶ errr project here reviewing video games so I can expense some Steam purchases and a processor/MOBO upgrade.

The phrase “…elegant-margined typesetting…” alone tempts me to take a look. That you deem it ” ecstatic, transportive, and rewarding” pushes temptation toward irresistible. Well done, you!

[…] A link to my review of SPECTRAL REALMS issue #11, which appeared on (Ever-the-Gentleman) John O’Neil’s Black Gate website can be found here: https://www.blackgate.com/2019/11/19/terror-existential-dread-and-surprised-laughter-a-review-of-spe&#8230; […]