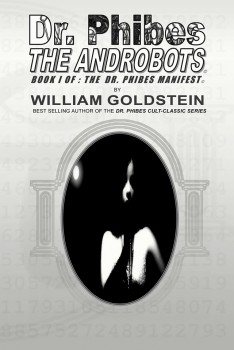 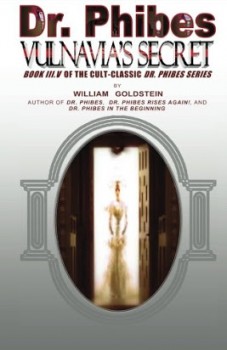 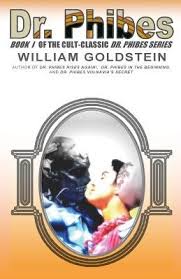 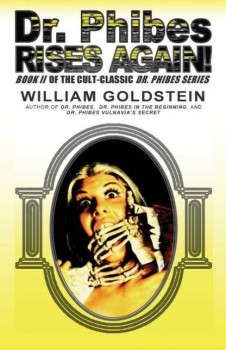 Goldstein’s books are a different beast entirely as they treat his original characters seriously for the most part and are steeped in its author’s evident love of history, culture, theology, mythology, sociology, and psychology. There really is no other way to explain the way his books live inside their characters rather than the reverse. The Androbots, in particular, captures generational, cultural, and economic differences so perfectly, one would be forgiven for thinking the book was written by more than one hand. Starting with the second book, Dr. Phibes Rises Again, Goldstein began interweaving past and present as he delved deeper into the elaborate backstories for his characters until it became clear that it is the ornate tapestries encompassing characters moving across continents and centuries that is what motivates him most as an author.

Most startling is the fact that a gap of 39 years separates the second book from the third, Dr. Phibes In the Beginning and its immediate sequel, Vulnavia’s Secret. It is evident that Goldstein made use of much unpublished material, some from numerous screenplay drafts (including unproduced sequels), with which to build his expanding series. However, the sheer notion that nearly four decades passed without the man publishing any other novels surely qualifies his comeback so late in life to be without precedent. The fact that the books have carved out their own niche among cult followers of the films rather than found mainstream acceptance is immaterial. Horror writers are rarely afforded legitimate recognition and authors of novelizations even less. The fact remains that Goldstein created these characters, co-wrote the original screenplay, and (decades after the fact) legally obtained the rights to not only resume his series of novels, but move forward with plans for a new movie and one which this time would not co-opt his vision of the characters. 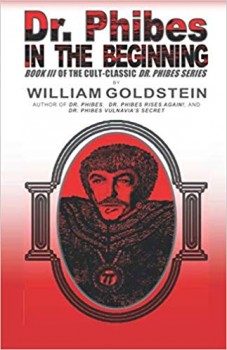 The Androbots makes clever use of an abandoned plot thread from Goldstein’s initial drafts for the second film involving the Institute for Psychic Phenomena, a fictionalized version of The Society for Psychical Research, who have come to possess the incorrupt corpse of Victoria Phibes and, consequently, brought her seemingly deathless husband’s vengeance upon them. This storyline, which is what one would expect from a more traditional sequel, is cleverly interwoven with flash-forward scenes depicting the 21st Century fate of Phibes’ Clockwork Wizards (as he styled his automaton jazz band). As with the third book in the series, In the Beginning, Goldstein is as interested in laying the foundation for what is to come as he is in filling in the gaps for what has has transpired. The Androbots is not a jumping-on point for new readers in spite of the excellence of Goldstein’s prose and the depth of his characterizations. Start with the beginning and work your way through the five books in the order of publication. The books are carefully layered to build upon their readers’ knowledge and make that which is fantastic seem surprisingly real and multi-faceted.

Nothing will take away my love for the original two films. In the words of The Right Honourable Christopher William Winland, “Phibes is special.” That aside, the durability of Goldstein’s characters, the high quality of his prose, and the unsurpassed detail of his scope and vision for what should have been disposable entertainment from a B-movie factory make me a devoted follower of his books. The Androbots, like the deathless figure who lurks behind each chapter, defies all odds and is my choice for the best new book I have read this year. A welcome return for Mr. Goldstein after seven years and the most convincing proof yet that Dr. Phibes’ future may prove just as remarkable as his past.

I’ve loved the movies since I was a kid but until now, I had no idea that they were based on a series of novels.

William Goldstein wrote the original screen story that he developed into a screenplay with childhood friend James Whiton. Goldstein then adapted their screenplay for a movie tie-in novelization. The duo helped develop the sequel, but did not write the final draft and are only credited as co-creators for the second film. Goldstein again adapted the sequel as a movie tie-in novelization (incorporating elements from their discarded screenplay drafts). Nearly 40 years later, Goldstein acquired the rights from the successor studio, MGM and from his former writing partner. Goldstein has now written three additional novels over the last decade with more to come if the Fates allow and has reprinted his two long out-of-print novelizations. Hope this clarifies the murky trail. – Bill