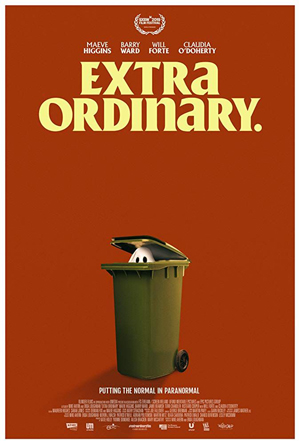 I had one film on my schedule for July 23, an Irish horror-themed comedy named Extra Ordinary. It was preceded by one of the best shorts I saw at Fantasia this year outside of a short film showcase.

Directed by Jason Gudasz, “Place” is a horror-comedy that works well in both its aspects. It opens as a young family moves into a new home, and finds something unwelcome waiting. The place, evidently, is haunted. But the pressures this puts on the family are resolved in an unexpected way. This results in a film that’s spooky, yet that also deftly deflates the tension it raises. The jokes work and set up character points, explaining the conflicts in the family and how the relationship between mother (Emily Green) and step-father (Nick Hurley) doesn’t really work. The images subtly create a tone that works both with horror and comedy, and it ends a series of related vignettes in a satisfying way that ties the 11-minute story together.

Extra Ordinary was written and directed by the duo of Mike Ahern and Enda Loughman. It follows Rose (Maeve Higgins), a driving instructor in her thirties in a small Irish town; she also happens to be the daughter of a long-dead paranormal investigator, and can see ghosts. She’s turned her back on her abilities as a medium ever since her father died during the course of one investigation. Unfortunately, an American rock star named Christian Winter (Will Forte) has plans to revive his career with a diabolic pact, which involves sacrificing the daughter of local widower Martin Martin (Barry Ward). Barry, already haunted by his dead wife, must seek Rose’s help, and hope she’ll return to her ghostbusting ways.

The movie’s a pleasant, entertaining watch that doesn’t do anything especially surprising but does what it does quite well. I described it as a ‘horror-themed comedy’ above instead of a ‘horror-comedy’ because while it’s all about ghosts and ectoplasm and black magic, there’s nothing actually horrific in it. There’s a reasonable amount of dramatic tension, but the supernatural goings-on aren’t used to inspire dread or fear. They’re there to set up gags, and to provide a solid story structure which in turn supports and generates further gags.

It has to be said the plot isn’t too solid in its details. The nature of the pact inspires a deadline in which Rose and Martin race around town trying to get a specified amount of ectoplasm during a night which seems far too long for the amount of activity that takes place. There’s another point where the evil Winter uses magic to locate a vital component of the ritual, only to find out said component is not usable; one therefore wonders why the spell led him where it did. 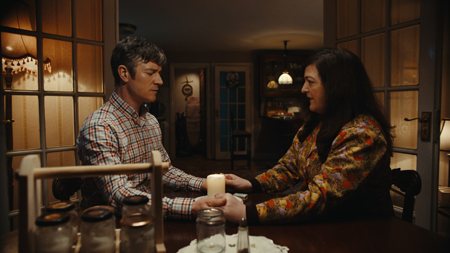 As long as I’m being persnickity, I’ll note that the film doesn’t hesitate to go for the obvious gags on occasion. Winters has to sacrifice a virgin to the dark lord, and every joke you just thought of about virgin sacrifices is in this movie. There’s a joke about a hairpiece blowing off to point up a male character’s vanity. The end of the movie boasts a very very slow chase scene, which is the second time I’ve seen that gag at this year’s Fantasia alone.

But it is all done well, in terms of how it’s set up and shot and paced. This is a well-crafted comedy, and it relies on character more than high concept to drive its story and jokes. Those characters are entertaining enough to carry the film, and so it all works.

The acting in particular is worth talking about. Higgins is excellent, showing the various kinds of stress Rose has to deal with while also bringing out Rose’s kindness and determination. Will Forte plays a character familiar from any number of his skits on Saturday Night Live — a frustrated, conceited man of limited imagination who constantly finds his elaborate plans going wrong and people around him not listening to him — but it is a thing he does very well, and this particular version is distinctive thanks to the rock-star background and the occultism. Barry Ward’s particularly strong, I felt, as he first sets up Martin Martin as a sympathetic if slightly bland romantic interest for Rose and then gets to play Martin possessed by a series of spirits. He changes his face, voice, and stance to craft a series of mini-characters, good comic acting that never becomes too broad. 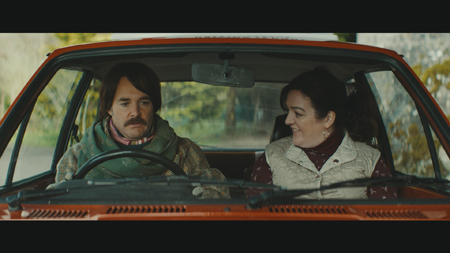 Extra Ordinary is unusual for a movie with fantasy element in that, as the title promises, it seems to celebrate the ordinary life. It’s just that, at least in this case, the ordinary life has supernatural elements. Rose sees ghosts as she goes about her daily routine at the start of the film, but the ghosts aren’t terrifying apparitions or planning some horrible scheme; just sad spirits replaying scenes from their former lives. Martin’s wife haunts him not out of a desire for revenge or to convey some profound message, but to nag him to pay the gas bill. Life goes on, even after living itself is done.

Into the ordinary village comes Christian Winter, who is determined not to be ordinary, and instead to rebuild his faltering career not by trusting in his own gifts but by turning to darker powers. There’s an interesting contrast between him and Rose, whose gifts remain strong though she’s chosen to ignore them. As much as anything the story’s about her becoming comfortable with those gifts again, and accepting that ordinary for her involves dealing with ghosts.

The movie manages to make this work by not exploring the deeper implications of its supernatural world. There’s no kind of religious component to the ghosts; nobody ponders what the implications of the existence of ghosts are in any kind of theological sense. I suppose there’s a vague sense of Christian myth in Winter’s calling upon the devil, but there’s nothing detailed there, or for that matter anything suggesting the devil’s the only power in the world. This works, as the movie does build enough of a sense of how ghosts work for the jokes and plot to function. While there are a few twists mentioned (there’s a mention early on of ghosts possessing the living bacteria in cheese) they’re not really crucial to the story. The movie manages to be about ordinariness while incorporating ghosts, a rock star, and Satan, and more surprisingly manages to be about ordinariness without being dull. 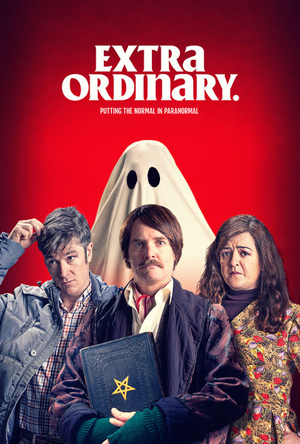 Extra Ordinary is a comedy film that works well. It’s not radical comedy by any means, but doesn’t try to be. It’s an entertaining movie, and it consistently hits exactly the tone it goes for. Which is a fairly specific tone. It has jokes about sex without being raunchy, jokes about gross things without being particularly gross. It’s perhaps a kind of country humour or small-town humour of the best kind, about life as it is lived without exploring unusual or particularly extreme aspects of life. It’s a movie about the ordinary, and what is extraordinary about it. The important thing about the film is: it’s funny.

After the screening, star Maeve Higgins came out to take questions. A comedian and experienced TV actor, her answers were peppered with asides and jokes which are beyond me to effectively recreate from my hand-scribbled notes. The first question was how she met the directors, and she said they were friends of friends, Ireland being a small country; they met in a pub, she noted, and said they were animators doing their first feature just as she was making her first movie as well. Asked if she had lots of input into her character, she said yes, over the course of years and multiple drafts of the script. She said the idea for the story came from a newspaper clipping about a lorry driver who investigated the paranormal. She stayed in touch with the directors as they developed the idea; they were more familiar with horror, and she with comedy. She also doesn’t drive, and claimed that as she didn’t think the movie would go anywhere, she only faked learning. She said most of the effects budget for the movie went to making shots of her driving.

Asked about the production, low-budget but accomplished, she said it was shot in 5 weeks, and recalled an incident where a car that was crucial to a shot was totalled by a tractor crashing into the back of it. Asked about working with Will Forte, she said she thought it was a good idea to get a famous person to play an American bad guy; she said he was a good actor, funny, and silly. Asked about the use of CGI versus practical effects, she said there was a good team of effects artists dedicated to making as many real effects as possible. Which was cheaper.

Asked about the making of the film’s ectoplasm, she said there was much experimentation, ultimately settling on a “classic white” variety made of semolina and icing sugar that unfortunately still tasted disgusting. Asked if any particular rock star inspired Forte’s character, Higgins asked politely if the character reminded the questioner of anyone in particular; the questioner said Chris de Burgh; she said she wasn’t entirely sure she was allowed to say it, but observed that Chris de Burgh did live in a castle (without paying tax on it) and suggested that he might have been in their minds as they made the film.

Asked if she’d found any particular challenges in her first film role, she said it was hard to be watched all the time. When on the phone or getting snacks, she’d always be trailed by the third assistant director. Also, she said, she began to feel dumb as she had no time to read or write for 5 weeks. She reflected that this was made at the time of the Irish abortion referendum, and making a happy movie was pure relief. Asked if other projects were coming, she said she would love to do more with these characters, either as a TV series or another movie.