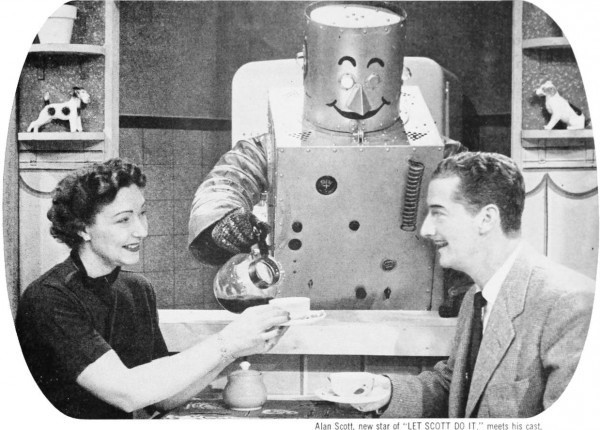 Look, I says to an intelligent-looking young boy of about seven standing near a tree, what’s this Mr. Rivets like?

In the manner children reserve for their plodding elders, the boy turned and said, he’s funny.

He turned back to the tree. Another man, standing nearby, spoke up, rather ill-advisedly it turned out. Well, he says, what makes him funny?

The boy fixed this innocent bystander with a gaze you might imagine someone giving to a soggy pork chop left over from lunch three days before. What makes anything funny? he asked.

That answer is so perfect that I’m tempted to end this article here, even before the Read More jump. What can I say that would top such wisdom? Nevertheless, join me after the jump and I’ll fill in the backstory of “Television’s original mechanical man.” 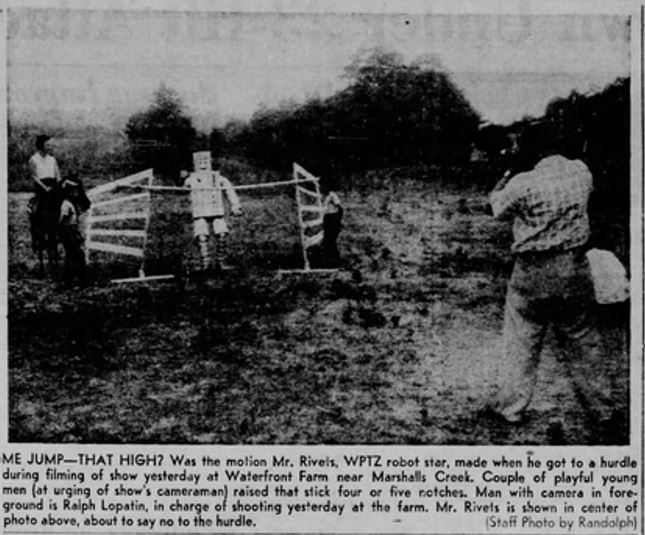 Just like politics, all television was local in 1952. Sure, television networks existed and coaxial cables connected a few eastern cities that shared programming starting at 7:00 pm, but the many other hours of the day were open for local stations to fill somehow. Philadelphia was a hotbed of homegrown talent. Ernie Kovacs created the first early-morning show for WPTZ in 1950. Ed McMahon clowned around, literally, for WCAU and hosted a very late night – 1:00 in the morning – talk show for WRCV. Captain Video and His Video Rangers was filmed upstairs at Wannamaker’s Department Store and broadcast six days a week on the Dumont network.

And George Skinner started Let George Do It in 1952 (quickly retitled Let Skinner Do it because another George already had a show by that name), billed in the program listings as “folksy chatter” and “a program of interest to the ladies.” 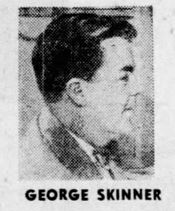 A mechanical man – never referred to as a robot – seems an unlikely addition. Mr. Rivets (a viewer remembers a contest to name the mechanical man, with the winner being Ferris T. Rivets, but I can’t confirm this) most likely was brought on to liven up the show for the kiddies. A classified ad in the Philadelphia Inquirer shows the possible usefulness of the ploy.

Mr. Rivets made just as good a walking poster board for WPTZ at local events. He and Skinner appeared in the Mummers Parade and the Jaycees annual Easter Egg hunt and every other fair and parade around town. A mechanical man was just as funny looking as clowns and far more distinctive.

The silent man inside the costume, Joe Earley, inventively thought up tricks and moves to tickle funny bones and play pranks on the genial host. Earley’s name apparently was never revealed at the time: it appears in no newspaper articles that I can find. A later short bio reveals that he was in 1952 a 23-year-old graduate of LaSalle College and had won an audition to work at WPTZ. He must have had good comedy chops. He worked with Ernie Kovacs and later became co-writer of Do It.

In 1954, Skinner got swept off to the big time, New York. Word on the street is that he took the robot idea, but not the costume, with him, renaming him Mr. Watts. I can’t find any confirmation of this either. He did well, rising to the position of general manager of NBC flagship radio station WNBC.

Joe Earley remained in Philadelphia, he and Mr. Rivets pairing with Alan Scott (nee Alexander Schwartz), a veteran of radio since 1931. Scott was in his mid-1940s and boasted a suave mustache. What more did one need to be a conversationalist with the ladies? No one told him about the kids. 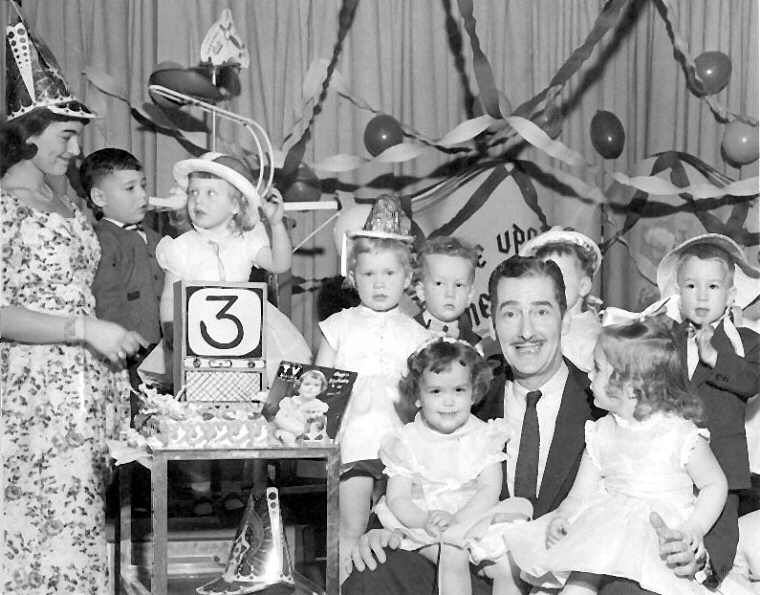 That rictus grin tells you all you need to know about the job.

OK, that’s not fair. The little girl sitting on Scott’s right leg who was celebrating her third birthday was Theresa Ann Delany, the daughter of a former secretary at WPTZ. “Miss Terry” proved to be a natural in front of the camera and was probably the youngest star in the country with a regular gig.

Hers is probably the least inhibited act on TV. Consuming about four minutes daily, it consists of doing what comes naturally to a young lady. Now nearly 2 1/2, Miss Terry plays with toys, cavorts with Mr. Rivets … and eats her breakfast “on camera.” Her fan mail indicates she is one of Philadelphia’s most popular TV personalities.

Is there a picture of Miss Terry and Mr. Rivets? Of course there is. And Scott looks almost as delighted with her as Mr. Rivets does. 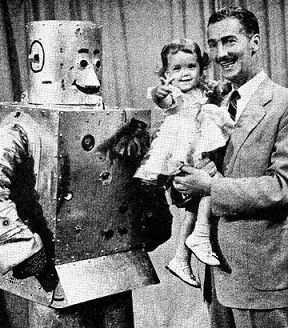 These were the days of live programming and nobody appears to have thought to make a kinescope of the program. What would you give to see Mr. Rivets cavorting, with Scott, or Miss Terry, or in the Mummer’s Parade? Whatever it is fork it over. The Broadcast Pioneers of Philadelphia website has 90 seconds of film of such antics. If you don’t have Real Player to run it, these screencaps show Mr. Rivets and Scott cavorting in Scott’s backyard, with Scott attempting to teach golf to the mechanical man. A backyard that size in tony Bryn Mawr is evidence that either local television paid its stars well even in the early days or that suburbia was insanely inexpensive back in the 50s.

Mr. Rivets became so popular that WPTZ gave him shows with his name in the title, first five minutes of cavorting before the regular program titled Today with Mr. Rivets and then a Saturday morning kiddie show, Scott and the Mechanical Man.

The paper didn’t bother to run an article revealing Mr. Rivet’s color to the 99.9% of the audience without color tv. I can’t be certain, but I’d give any odds he was as gray as anyone in The Lathe of Heaven.

Color didn’t save Mr. Rivets when a new program manager arrived in late December 1956. Let Scott Do It was replaced by Let Scott Play It, an embarrassing attempt to cash in on the popularity on Philadelphia’s hottest local show: American Bandstand. Trying to turn a 47-year-old suave talk-to-the-ladies man into a teen heartthrob failed as spectacularly as even a program director wanting to put his stamp on a new gig should have expected. It was gone by February.

Scott did this, that, and other for a variety of Philadelphia stations for the next 20 years. Joe Earley won local Emmys both in Philadelphia and Los Angeles. Mr. Rivets is never mentioned again. Such is show biz.

Steve Carper writes for The Digest Enthusiast; his story “Pity the Poor Dybbuk” appeared in Black Gate 2. His website is flyingcarsandfoodpills.com. His last article for us was Artzybasheff’s Robots.