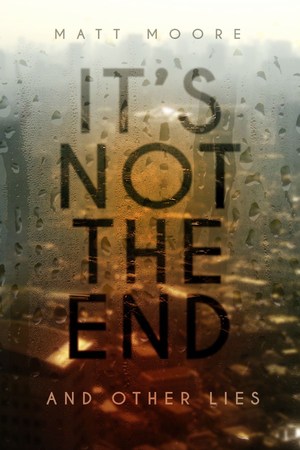 When I was newly-arrived in Ottawa, starting my first year as a high school teacher and still struggling to “break in” as a writer, I subscribed to On Spec, Canada’s premier magazine for short speculative fiction. One of the first issues I received was On Spec #92 in spring 2013, containing an op-ed titled “Next Stop: Suburban Fantasy” that discussed the popularity of urban fantasy and how the subgenre might evolve. It’s sitting on my office bookshelf right now, and rereading it this week I’m just as impressed as I was over five years ago.

That first read was long before I became friends with Matt Moore, whose recent story collection It’s Not the End and Other Lies proves several of the points he made in his op-ed, including that the urban sprawl we find ourselves in today can be just as bizarre and terrifying as the wilderness humanity has left behind. What I’ve loved about Matt’s work for a long time is his ability to combine an everyday suburban setting and make it the perfect place for something uncanny. The core of “Only at the End Do You See What Follows,” for example, is really a widower struggling over what to do with his house – except that his dead wife somehow predicted every person who would come to see it. The supernatural element isn’t really the hook, though; instead, it’s the protagonist’s relationship with his wife, a malicious cheater who’s borderline emotionally abusive, and the question of whether he’s hearing her from beyond the grave at all.

Like the best science fiction or horror writers out there, Moore’s talent doesn’t stop at combining the everyday with the speculative – the real magic is his character work. The supernatural force killing townspeople in “The Leaving” is just the vehicle; the real intrigue is waitress Georgina, desperate to atone for sending an ex-lover out into the night to die. Whether “Of the Endangered” is alternate history, slipstream or far-future SF is a mystery right to the end, but so is Noah, the Gunslinger-esque hunter chasing a backwoods demon. The fallen sky in “Touch the Sky, They Say” is a beautiful concept, but only because of the people wanting to press their hands against the stratosphere. But my personal favorite (I think) is “Brief Candles,” focusing on a couple desperate to have children in a post-Vietnam suburb, but forced to wait until they get a candle holding a soul that can be given new life through reincarnation. Whether the Cycle in this world is fact or fiction is never established; the important thing is what these characters believe, and what they’re willing to do because of it.

I could spend another five hundred words on Moore’s intricate, intriguing takes on zombies, werewolves, religiosity, and more. His writing is that good. So I’ll close by saying that just like the first time I saw his name back in 2013, Matt Moore continues to impress me. Go buy his book. Seriously.

I’m totally going into my next five hundred words for a quick shout-out about Can*Con! Ottawa’s annual conference on sci-fi, fantasy and horror writing is back October 12 to 14, featuring Guests of Honor Kevin Hearne (author of the Iron Druid series), Kurestin Armada (agent with P.S. Literary in New York) and Miriam Weinberg (senior editor with Tor Books and Tor Teen). There are going to be a ton of excellent authors in attendance, including Matt Moore, and other folks who I’ve mentioned here on Black Gate, including Kate Heartfield, Costi Gurgu, Jerome Stueart, Tanya Huff, James Alan Gardner, Rebecca Diem, and Kelly Robson. If you’re in the area (or can get here) and like an awesome industry con, you should totally come check us out. Learn more here: can-con.org.

Thanks for the kind words, Brandon! If anyone would like to find ordering links for the ebook or trade paperback, check out: https://chizinepub.com/its-not-the-end-and-other-lies/