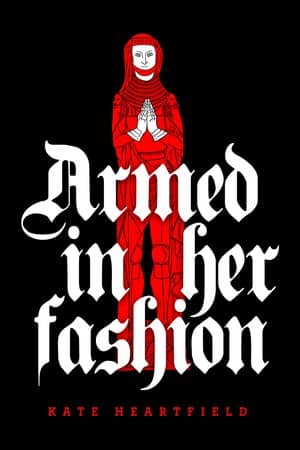 Fantasy is a tough industry. You can a) stick to tried-and-true tropes and structures and hope to stand out in subtler ways or b) come up with something truly outside-the-box and hope that it still appeals to the traditional fantasy audience. Neither of these options is a sure thing (is anything?). But it seems like every month, reviewers point out authors who are doing one or the other and doing it well.

That’s basically what I’m doing here. Not simply because I’ve been a fan of Kate Heartfield’s short fiction since well before I got to know her here in Ottawa (she’s awesome, by the way). It’s because her first novel, Armed in Her Fashion, is basically Option B on some performance-enhancing drug.

We’ve all seen the basic quest narrative, right? Protagonist and company need to travel somewhere and do a thing, they go through a bunch of challenges en route, and the path to their goal isn’t at all what they expect when they set out from home. Fashion is essentially a Campbellian hero’s journey, but it’s also way more. It’s set in 14th century Flanders, for one thing. It’s also alternate history, taking place at the outset of the Hundred Years War, but with a Hellmouth and revenants in play. And the cast is mostly women, centered on widow Margriet de Vos and her daughter Beatrix, looking to reclaim the latter’s inheritance from Margriet’s sorta-dead husband. The concept of women’s rights and authority is a huge piece of this story, but in a medieval context, and with an additional angle in the form of Claude, a transgender man-at-arms. Claude is a particularly compelling character, allowing Heartfield to explore a topic I’ve never seen in fantasy before: how a transgendered individual would be treated by a medieval, patriarchal society. As well, the disconnect between how Claude views himself and how even Fashion’s other protagonists view him as “that woman who dresses like a man” isn’t all that alien when compared to contemporary society.

The other interesting thing is that Fashion is a fantasy story without a ton of action. There’s no epic battle on the walls of Helm’s Deep; instead, most of the conflict is solved through subterfuge and negotiation (but with a bit of action). Margriet’s plan is to use existing law to get her dead husband’s money, leading to an actual conference involving the king of France to determine whether resurrected revenants are dead or alive. It’s exactly the sort of thing you don’t see a lot of in a genre that’s dominated by swordplay and explosive magic, and Heartfield constructs it in a way that’s never dry or slow.

All of which is to say that Armed in Her Fashion has a ton of originality while still hitting on the things you want out of a solid fantasy novel. This well-deserved debut is excellent, and I’m already excited for whatever Kate Heartfield releases next.

An Ottawa teacher by day, Brandon has been published in On Spec, Pulp Literature, Third Flatiron Anthologies, and elsewhere. His short story, “Moments,” can be read for free on Daily Science Fiction. Learn more at brandoncrilly.wordpress.com or on Twitter: @B_Crilly