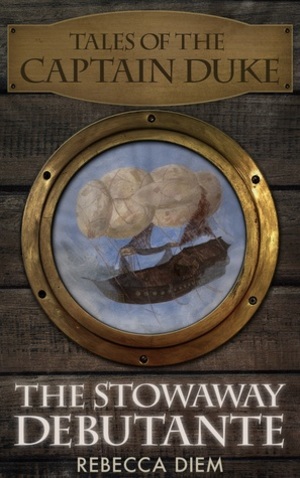 Tales of the Captain Duke
By Rebecca Diem
Woolf Like Me (paperback/ebook editions, price varies, Aug 2014 – May 2018)

For anyone who reads this column even semi-regularly, this next review is probably gonna seem out of place. But indulge me for a few minutes to talk about Tales of the Captain Duke, a four-part series of indie novellas by Toronto author Rebecca Diem.

First thing to make clear: these novellas are equal parts steampunk adventure and romance, which is obviously not my usual cup of tea, so the fact that I’m reviewing it here should tell you something. Because honestly, I got swept up in this series. Why? Besides the fact that airships and pirates and steampunky technology are really cool, these novellas focus on character, which is always the number one thing I look for in a series.

Though the title is Tales of the Captain Duke, the focus is really on Clara, a debutante who leaves her life of wealth by sneaking away on an airship and falls in with “pirates” standing up to economic tyranny and corruption, under the leadership of the legendary Captain Duke. Okay, maybe that sounds like an obvious romantic setup – especially as the attraction between Clara and her new Captain is made clear – but Clara is far from your stereotypical female character.

She’s a badass, and quickly becomes an important part of the Captain Duke’s crew, joining a group of nuanced characters who go through a series of arcs from the first novella to the last. For example, you have first mate Trick, who becomes a vehicle for exploring physical disability when he relearns how to make music with a prosthetic arm, and youths Cat and Mouse, who desperately want to be adults and contribute more to their captain’s operations but have a lot to learn before they can.

This character work is tied into detailed, thought-out worldbuilding beyond the usual Victorian steampunk. Remember that this is an adventure story, too, complete with plenty of action and danger. Admittedly, this isn’t a story about elaborate twists and turns or huge surprises; when things from Clara’s past get mentioned off hand, you know they’re going to play a greater role later on, and when the Captain Duke’s people get betrayed, the culprit is pretty clear. That isn’t a bad thing, by any means. I love what Patrick Rothfuss calls “big fat fantasy books,” but sometimes I need a story that’s straightforward and fun, too, which Diem delivers in this series.

I’ve mentioned before that indie and self-pubbed books get looked down on a lot (don’t deny it, my dear colleagues) but there are a lot of solid indie authors out there, and Rebecca Diem is one of them. Tales of the Captain Duke is a blast, and whatever Diem goes on to write next, I’ll be checking it out.

An Ottawa teacher by day, Brandon has been published in On Spec, Pulp Literature, Electric Athenaeum, and elsewhere. Check out his Curious Fictions page, where he’ll be posting one short story per month and exclusive extras for subscribers (with a new story dropping in a few days!). You can also follow Brandon at brandoncrilly.wordpress.com or on Twitter: @B_Crilly