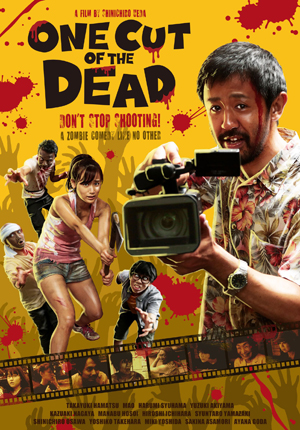 I settled in at the Hall Theatre on the evening of Sunday, July 29, to watch a movie about which I knew little. I knew it was Japanese, I knew it was titled One Cut of the Dead (Kamera o tomeru na!, カメラを止めるな！), and I knew it was written and directed by Shinichiro Ueda. The movie ended up being excellent and even uplifting. But writing about it presents a challenge.

(Before the feature there was a short called “Crying Bitch.” Written and directed by Reiki Tsuno, it follows a man who tries to break up with his mistress while his wife is becoming a literal monster. Things don’t go as planned for him all down the line. It has some effective physical comedy and unexpected moments.)

One Cut of the Dead is a movie that starts out one way, and then a bit past the half-hour mark reveals that it’s something other than the one-cut zombie comedy-thriller we thought we were watching. In an ideal world, viewers would go into the film blind, I suppose. In this world, I’d like to actually write about what I saw; and in any event I didn’t go in blind, exactly, and that didn’t hurt my experience of the film. So I’ll say that if you want to have a real surprise, don’t read further in this review. But do see the film if you want to watch a comedy with a few horror elements. I think it is worth pointing out that this isn’t a zombie movie, as such, for all its initial appearances.

Let’s start with that first half-hour take. We’re watching a zombie movie being made, with a manic director (Takayuki Hamatsu), a couple young fresh-faced stars, and assorted crew including a makeup lady (Harumi Shuhama). What we’re watching is being filmed in one take, the camera roaming around as various people drift by in the old abandoned warehouse where the movie’s set. And then there’s a zombie attack for real, and the director loves it.

But there’s something weird about this movie. Sure, we see a cameraman, but who’s filming the cameraman? Dialogue’s random, setting things up that never seem to get paid off. Everything moves very well, and it’s a fun film to watch, but one might think it all feels a little ramshackle. And then the twist comes that explains what we’ve just seen. 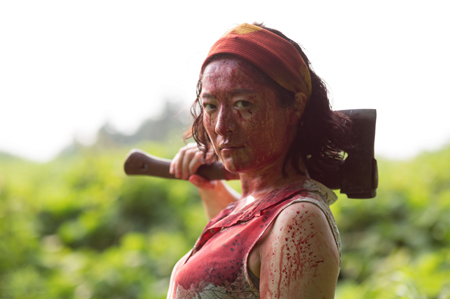 The movie skips back a month, to when the director, Higurashi, is hired by a new TV station that plans an all-zombie programming line-up. To mark the station’s debut, they want Higurashi — a veteran hack whose motto is “fast, cheap, but average” — to make a half-hour one-cut zombie film to be aired live. Higurashi agrees, and we see the film beginning to come together as the cast and crew are assembled; we’re watching the making of the half-hour film we just saw.

This sounds like it shouldn’t work, but it does, gloriously. The middle of the film is the build-up to the filming, and the last thirty-seven minutes shows us the filming of the first thirty-seven minutes from behind the scenes. Both these parts play with the knowledge we think we have from the first part. The middle introduces familiar faces, but in roles we don’t expect; the woman playing a make-up lady isn’t an actress but the director’s wife, for example. Then we learn that she used to be an actress but had to stop because she got too into her role — and we begin to see where this is going, and how much groundwork is being laid. By the time we get to the last part of the movie we’ve seen how much desperate improvising has had to go on and how close things are to total disaster, and even though we’ve seen the finished product of the zombie film we’re still holding our breath in hope that things will work out.

It’s a little like a zombie-film version of Noises Off, but to my mind superior to that play about actors who fail to stage a coherent production. Noises Off had things getting worse and worse; there’s not much narrative suspense or investment in the characters. One Cut is, in its way, an examination of an improbable success. I, at least, come to care about it in a way that Noises Off never manages to inspire. 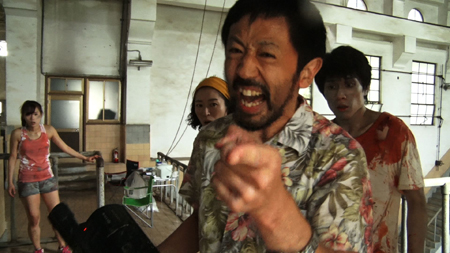 Essentially, One Cut is a testament to the passion of filmmakers. The last sequence is incredibly tense as all the cast and crew pitch in to try to get the last shot of the movie right, even though the crane that was supposed to lift the camera into position’s unusable; to replace it, everyone makes a human pyramid to lift the camera where it has to go. It’s the perfect metaphor for filmmaking, a collective endeavour to support the camera and get the shot that tells the story.

Saying that means it’s important to acknowledge the collective effort that produced this film. And in fact the acting’s excellent, from start to finish, across an ensemble cast in which even minor characters can end up having important moments. Lead roles begin as one thing, cut to be something else, and then transform again over the course of the film; and we’re with them all along the way. The “one-cut” first part is obviously well-choreographed, but the behind-the-scenes recreation is a good job as well (I would love to see a screening of the first and last part of the movie shown synchronised). This is a movie that comes together to be first interesting and then screamingly funny.

I don’t know why it should be the case, and maybe after all it’s just me, but I find that novels and poems about the act of writing novels and poems aren’t often all that interesting as love-letters to their respective media. Comics about making comics fare a little bit better. But films about filmmaking, and by extension about the glory and wonder of cinema, can be breathtaking. That may simply be a function of the scale of making even a small movie: it’s a major project, requiring vast resources. It’s inherently dramatic, trying to wrestle these diverse elements into a coherent whole. One Cut of the Dead finds a great story in an especially unlikely process. It builds throughout, so that characters we meet as one thing end up as quite another, moments that seemed to be about one emotion are about something else, and a nonsense syllable becomes a recurring laugh line (“Pom!”). It’s a zombie film about the joy of filmmaking, and it’s an unexpected treasure.