It may be turning into an annual tradition here at the McLachlan-Alonso household–beating the Madrid heat by playing tabletop wargames. I first introduced my son to the concept of wargames with Soldiers 1918, an old Strategy & Tactics game.

This summer it was Outpost Gamma, an old Dwarfstar Games science fiction wargame available free online. Just download it, take it to your local printshop to get the board and chits on suitable card stock, and bingo! Old school fun.

This is a simple game, perfect for a kid who hasn’t done many wargames. The rules are clear and straightforward, and the game is pretty fast moving. Game time took about an hour.

Earthers have placed mining colonies on a distant planet ravaged by electrical storms. The native species isn’t too happy about it and decides to kick the miners and the space marines out. What results is basically a colonial warfare game, with a few heavily armed soldiers trying to beat off a superior force of poorly armed natives. 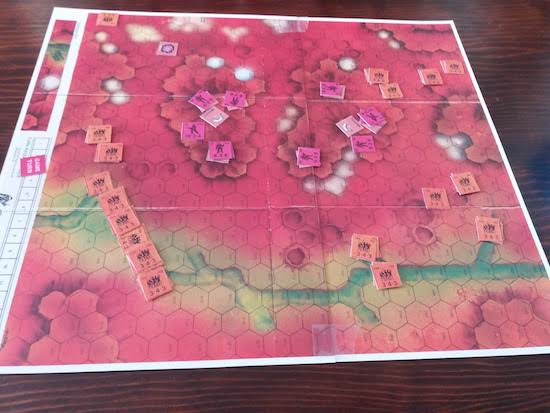 The natives do have a few extra advantages. They are not affected as much by the terrain and storms, while the marines find their equipment malfunctioning during the electrical storms.

There are two scenarios. In the first, wave after wave of natives try to take fortified high ground from the intruders. We played that one, with me as the natives, and it quickly became clear that the marines are hopelessly outnumbered. The second scenario, in which the humans try to evacuate miners, is slanted in favor of the Earthers. 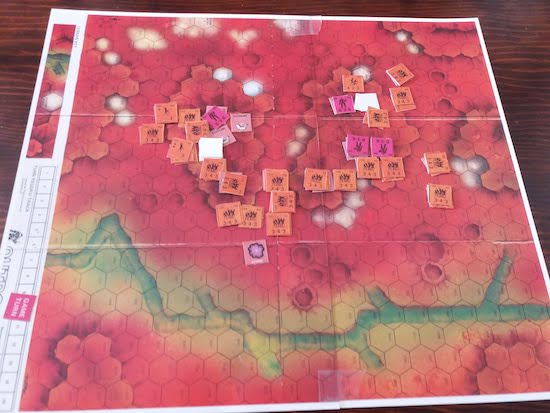 “Hey, son. did I ever show you the movie Zulu?”

While the game balance was somewhat poor, we enjoyed playing. If we play this one again, though, I’ll have to come up with a more balanced scenario.

We downloaded this game from BoardGameGeek, which has an amazing list of free wargames to download. So what are you waiting for? Challenge your children to a fight to the death today!

See all our previous coverage of Dwarfstar games, including the classic Barbarian Prince, here.

I was a huge fan of the Dwarfstar line of minigames when they were released in the 80s. BARBARIAN PRINCE was the jewel in the crown for me, but there were many others — including DEMONLORD, STAR SMUGGLER (a science fiction version of BARBARIAN PRINCE), and GOBLIN.

As you note, you can download most of them. Everything you need is here:

Downloading them is definitely the best way to get them these days. These games were very fragile, and not many copies survived. I assembled a complete set decades ago, and was aghast at how expensive it was… and prices have only increased since.

A battered and incomplete copy of BARBARIAN PRINCE on eBay — with no map! — sold for $51 a few weeks ago. Trying to assemble a set of originals of these games today would be a painful undertaking, I expect. I’m very glad to see there’s an inexpensive way for a new generation to try them out.