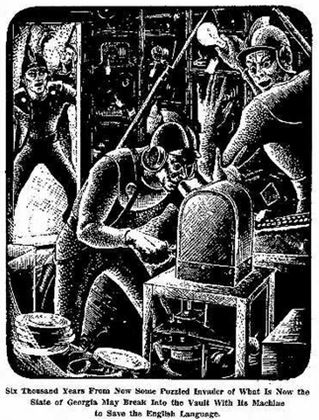 The International Time Capsule Society (ITCS) is an organization established in 1990 to promote the careful study of time capsules. It strives to document all types of time capsules throughout the world. When founded, the group was headquartered at Oglethorpe University in Atlanta, Georgia.

Hey, that’s not crazier than studying robots. And, like robots, information about time capsules – like time capsules themselves – easily gets hidden or obscure. Somebody needs to dig around, often literally, to get their stories on paper. And sometimes a robot is involved.

Proclaiming the glory of contemporary magnificence in ways that would last to impress future generations goes back to early recorded history. What came to be called a “time capsule” is a variant on this age-old notion. Time capsules are more than the collection of contemporary stuff that might be entombed in a cornerstone. They’re designed for higher purposes:  preserving the entire essence of our civilization in the most time-proof way. More than mere stuff, although that was a crucial component, they needed intelligibility so that future discoverers could decipher what probably to them was language as lost as Etruscan. That notion is surprisingly recent. The first person to systemically tackle it was was Thornwell Jacobs, the president of Oglethorpe University. 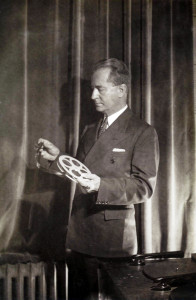 Jacobs, a renowned scholar who had refounded Oglethorpe University in 1913 after the original had been destroyed in the Civil War, had what his biographer described as an “almost obsessive millenarianism.” He despaired that mere bits and pieces of the complex societies and cultures of ancient times managed to survive to the present, resulting in scholars lacking the context to give true meaning to those bits. The world he lived in, a time of depression and totalitarianism, gave rise to a sense that history itself was endangered.

As a university president, he had both the vision to propose a solution and the influence to make his obsession a national preoccupation. He laid out his plan in the November 1936 Scientific American.

The perfect spot already existed on the Oglethorpe campus, an already waterproof abandoned swimming pool resting on stable granite bedrock. It would be filled with stuff, filled with inert gas, and then sealed, swathed, and encased to make it a more impregnable crypt than even the Egyptians had ever dreamt of.

That seemingly random future year of 8113 was chosen mathematically. As far as scholars knew then, the first datable year in recorded history was 4231 B.C., the establishment of the Egyptian calendar, or 6177 years before 1936 A.D. The crypt would be designed to last an equal amount of time and be opened 6177 years in the future, or 8113 A.D. 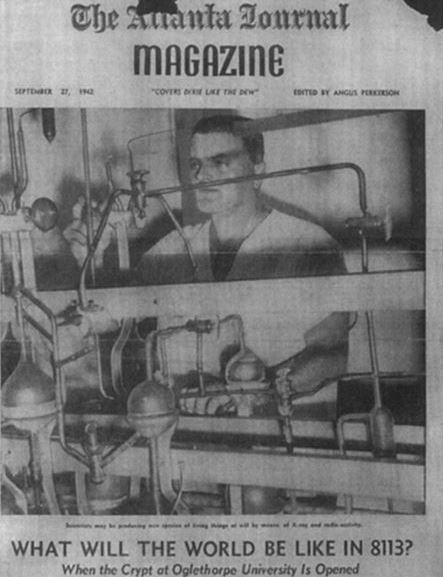 Newspapers and magazines went wild over the idea, soon dubbed the “Crypt of Civilization.” Wags and wits had a field day over the idea of future historians pawing over our midden heap. One in a 1938 Worcester Telegram wrote:

[S]ome of the headlines will undoubtedly be the same then as now:

On closer look, those are still relevant today. When’s the last time you read of Gehrig getting a hit?

Ideas for what should be entombed in the crypt poured in from readers, like “a pair of garters, a can opener [and] a dry martini complete with olive.” Those in higher positions donated objects or films or records, both music and official. Here’s the official summary, from Oglethorpe, where you can read a full inventory:

200 books of fiction; drawings of all of our inventions made to scale such as our means of transportation, communication, etc.; a record of the sports, amusements, pastimes and games in vogue during the last century; motion pictures of historical events since 1898; still photographs giving the history of the United States since 1840; sound motion pictures of the great men and women of the world; sound records of important radio speeches, motion pictures of industrial processes; medical and surgical subjects; views of the great cities of the world; sports pastime, newsreels, and dramatic subjects; educational pictures in all subjects, an apparatus for teaching the English language in case it is no longer spoken; actual samples of objects of our daily life; scientific, navigation, and aviation instruments; projection apparatus for motion pictures; reading devices for the microfilm; artificial aids to sight; artificial arms, dentures, wigs, etc.; weights and measures current in the world today; measuring instruments; seeds of flowers, plants, vegetables, fruits, and trees; drawings and paintings; paper mache models of fruits and vegetables; artificial flowers; clothing, models of jewelry, no gold, silver, or jewels are included to tempt vandals.

Far too much existed to fit inside even a swimming pool. Jacobs got another inspired idea. He went out and hired Thomas Kimmwood Peters. 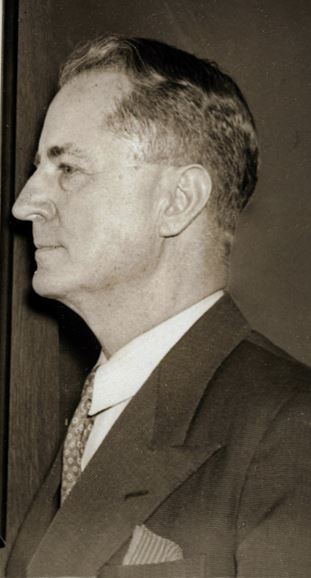 Peters had been the only newsreel photographer to film the 1906 San Francisco earthquake and later invented the first microform camera to use 35 mm film. The leading expert on miniaturizing images, he proceeded to reduce to world’s knowledge to fit in a Pringles can. Paul Hudson wrote:

From 1937 to 1940, Peters and a staff of student assistants conducted an ambitious microfilming project. The cellulose acetate base film would be placed in hermetically sealed receptacles. Peters believed, based on the Bureau of Standards testing, that the scientifically stored film would last for six centuries; he took however, as a method of precaution, a duplicate metal film, thin as paper. Inside the crypt are microfilms of the greatest classics, including the Bible, the Koran, the Iliad, and Dante’s Inferno. Producer David O. Selznick donated an original copy of the script of “Gone With the Wind.” There are more than 640,000 pages of microfilm from over eight hundred works on the arts and sciences. Peters also used similar methods for capturing and for storing still and motion pictures. Voice recordings of political leaders such as Hitler, Stalin, Mussolini, Chamberlain, and Roosevelt were included, as were voice recordings of Popeye the Sailor and a champion hog caller.

Hudson, BTW, was an Oglethorpe student in 1970 when he stumbled over old records about the Crypt. He became fascinated with time capsules as a result and eventually founded The International Time Capsule Society, which is why it was headquartered at Oglethorpe.

The problems of reading and understanding the stored works remained, yet were carefully eliminated one by one. No electricity? A windmill-run generator could provide enough to meet the needs of the sound-film projector. No English? Easy. A robot would teach them. 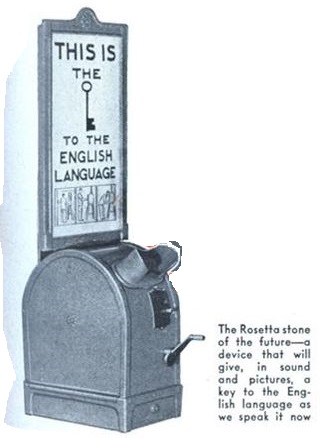 A robot, to people in the thirties, still had the connotation of an automatic device. This robot was purely mechanical, powered by the crank in front. A syndicated 1938 newspaper article with the title I stole for this piece explained its operation.

Remembering the old-time penny “peep-machines” in which pictures flipped on top of another when a crank was turned, [Peters] constructed a robot along similar lines. Now an inhabitant of 8113 A.D. by turning a crank can see a picture of an apple, for example. Beneath the picture the word “APPLE” is printed. The crank is is synchronized with a phonograph record in the base of the machine which also peaks the word “apple.”

The key words which Mr. Peters picked for his robot are eat, drink, food, water, sleep, good, bad, come, go, help, love and beware (in the sense of “take care”) because, to his opinion, “most of the elementary actions of life could be carried on with them.”

The robot is the first thing future visitors would see upon entering the crypt, giving them the clues to everything else. It’s the future’s key to the past’s secrets.

The long task of preparing the crypt meant that it was not formally sealed until May 25, 1940. By that time the Westinghouse corporation nicked the idea for its exhibit at the 1939 New York World’s Fair. They called their seven-foot tube a “time capsule” and the term stuck. They got 99% of the publicity and glory while Oglethorpe’s crypt was no more than a local sensation, occasionally alluded to in articles like these. Besides, Westinghouse debuted Elektro the robot as another piece of its exhibit, a true robot who became the public face of robots for the next decade.

The brainchild of Jacobs and Peters remains the starting point for the genre. Those wanting to save civilization for future generations to find and understand still study the problems they first exposed and learn from their solutions.

Want a look inside of something no human eyes might see until our civilization is dead and gone? Glad to oblige.

If you’re thinking of tomb robbing, try a pyramid first. The crypt has a two-foot thick floor of stone and is covered by seven feet of more stone. The gallery’s granite walls are lined with vitreous enamel embedded in pitch. A giant stainless steel door bars the way. Besides, I’m sure the museum is closed at night.

Steve Carper writes for The Digest Enthusiast; his story “Pity the Poor Dybbuk” appeared in Black Gate 2. His website is flyingcarsandfoodpills.com. His last article for us was Shirley Manson: Killer Android. His book on the history of robots in popular culture is scheduled for a 2019 release.

[…] both their lives and likely more. (Speaking of serendipity, part of this is reminiscent of the time capsule article I linked to in the latest “Links” post.) In “Extinction Studies,” which […]