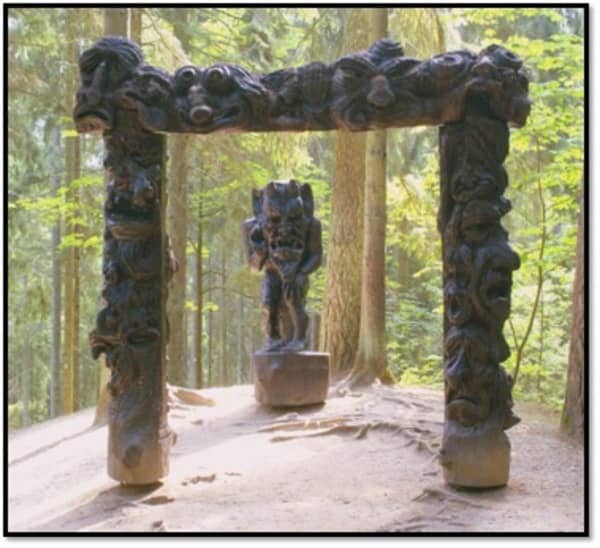 Each year I have the pleasure of traveling abroad, in part to seek out the folklore and legends of other cultures. Though every country I have visited (53 as of this trip) has its own take on the supernatural, I find it fascinating that from Egypt to Germany, and Iceland to Singapore, every culture without fail agrees that ghosts, demons and witches most definitely exist.

On this year’s visit I discovered Lithuania, a country full of fairy tales and legends about its history, geography, and its people. Many of these amazing stories never make it outside of the country, often due to the language barrier. However, you need only to sit and talk to a native Lithuanian to learn the mystic legends that surround their country. Following the advice of one such local I set out to pay a very early morning visit to Raganų Kalnas, Lithuanian for Witches Hill.

Located in the sleepy little island village of Juodkrante just off the coast, Witches Hill is situated on a long, narrow islet called Curonian Spit. It is made up of beautiful sand dunes and dense pine forests, and the only way to get to it is via ferry leaving from the town of Klapedia, which only adds to the magical quality of the location. 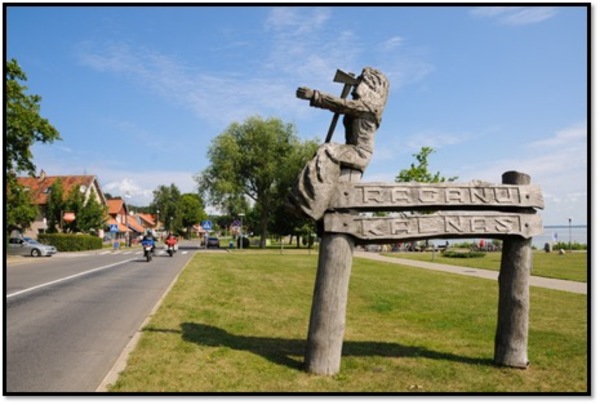 Prior to WWI, Witches Hill was the setting for a midsummer festival called Jonines (St. John’s Eve) once Christianity spread through the region. Lithuanians would come from miles away to join in the festival that took place every year on June 24th. There was music, dancing, and a ritual called The Hunting of the Fern Blossom. Because of Lithuania’s northern location, St. John’s summer nights are extremely short, such that as soon as the last light of sunset disappears in the west, the sky in the east starts to brighten with the first signs of dawn.

This night is believed to be special, filled with omens and magic. It is said that ferns bloom only at midnight on this night and whoever is lucky enough to find such a blossom will gain special powers: to understand the languages of birds and animals, to be able to foretell the future, to know where treasures are buried and many others.

Young and old alike would go out on Jonines to look for fern blossoms. For the young it was a rare opportunity to romp around in the woods at night unchaperoned. And as you can imagine many marriages resulted from The Hunting of the Fern Blossom. 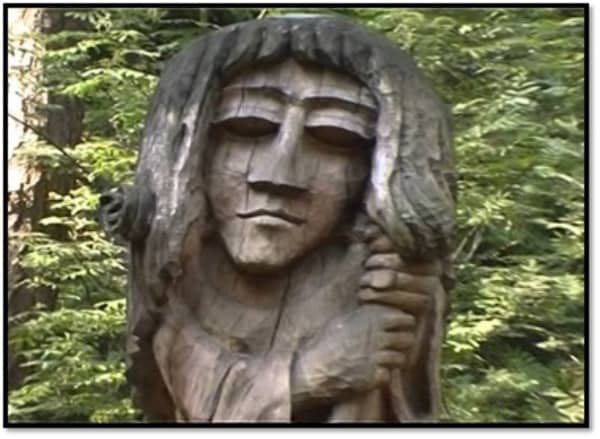 Because of Jonines, legend has it that that Witches Hill lies in a dimension between the mystical and the paranormal. It is where the witches, goblins, fairies and devils all come together each night after sunset. They party, drink, dance, gamble, and play cards. Most of all, they scare the wits out of any mortals that dare to enter the hill after dark. They roam the woods, frightening, confusing, luring, and tormenting any human who crosses their path. The only reprieve for all mortals is when the rooster finally crows at dawn. It was a warning to the party-goers of the pending sunlight that would soon pass over the hill. As soon as the rooster crows, all the magical and mystical beings disappear until the following sunset.

Sadly, after WWI, this magical festival was stopped. However, the locals will tell you the witches and devils continued to meet on Witches Hill each night. Today, the hill is covered with wooden carvings that bring many of the amazing Lithuanian legends and fairy tales to life. Walking up the front side of the hill is bright and airy with lots of sunlight and magical carvings. You can see Egle, the Queen of the Grass Snakes, the storyteller, and even the magical fern blossom.

Once you reach the summit and start to make your way down the back side of the hill, you will notice a different feeling. The sunlight seems to be hidden behind the trees, the wind picks up just a little bit, and the carvings are of gruesome things like Lucifer and the Gates of Hell, scary sorcerers, and wicked witches. Beware not to get caught on this side of the hill after dark I was told, or I might never return. Hurry past the creepy carvings, dark trees, and staring goblins until you reach the rooster – he is the sign that daylight is coming and you are once again safe from the witches and devils.

So what did I do? Arranged transportation to Witches Hill, arriving at 5 am giving me roughly 30 minutes to explore before sun up. Instead of following the directed route, I walked up Witches Hill widdershins, starting at the rooster and headed up the “darker” side of the hill first — precisely as I was told not to. 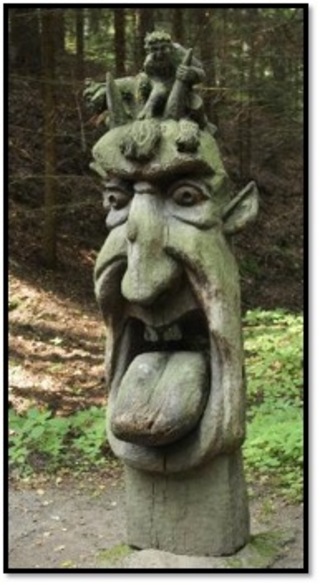 Though all of Europe was under a brutal heatwave during my visit, predawn in the dense forest was damp and chilly – and really, really dark. Was it easy to imagine demons lurking in the shadows and the feeling of being watched from just outside the glow of my flashlight?

I tell myself now, safely back at my computer, that I didn’t venture far due to the dark and the ground being uneven and wet from the overnight rain. But when the first rays of sunlight appeared I was already waiting with one hand on the statue of the rooster, like a kid playing tag firmly gripping the safe zone.

And yes, some nearby household was home to chickens, and when the rooster started crowing all the inhabitants of Witches Hill put away their card games for another night. 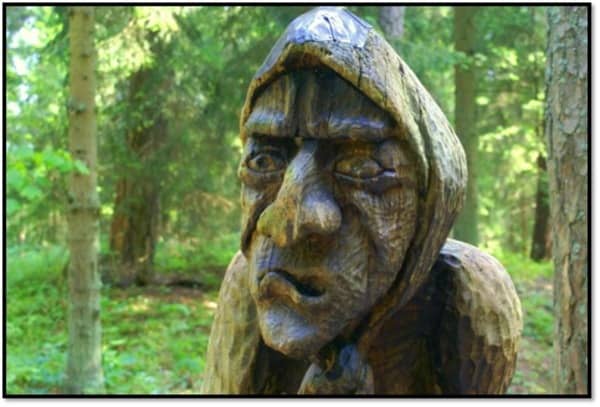 Today visitors to Witches Hill walk along path which wanders through a beautiful art exposition in the open air.  Work began in 1979 on the sculpture park now featuring 80 different wooden carvings from local artists. Painstakingly hand-crafted, each sculpture depicts a popular character from the folk and pagan traditions in the Juodkrante. In the light of day Witches Hill is a forest museum that truly was one of the most magical places I have ever visited.

And to this day every June 24th, people across Lithuania dance, sing and bring in the midsummer on Witches Hill.

Loved reading this. The Lithuanians were among the last European peoples to be Christianized. Almost as soon as the Baltics got their freedom, a movement to reconstruct pre-Christian Lithuanian paganism started. They’re not a big movement, but they’re pretty fascinating. I wonder what they do on the 24th.

Thank you Sarah, I never realized what an interesting place Lithuania was until I experienced it first hand. From what I understand after looking at a few sites when I got home, they celebrate the 24th of June in much the same way I heard about when I was there – lots of dancing, singing and frolicking (with some adult beverages as well).