It’s that time again, folks. I’m taking a break from my ongoing reread of Glen Cook’s Black Company (6 books down, 4 to go!) to give you an update on the latest heroic fantasy short fiction. First, as usual, there’re the monthly two stories from Curtis Ellett’s Swords and Sorcery Magazine. The other source of stories this July is a collection from Howie Bentley. Most of the stories are reprints I’ve reviewed before, but there are some new things I’ll tell you about.

Issue 77 of Swords and Sorcery Magazine kicks off with “Gina,” the fiery (and bloody) story of a deadly young woman with the ability to control elementals. It’s by Gustavo Bondoni, an author whose work I’ve reviewed in the past. The story kicks off just as Gina is about to be “sacrificed to the fire-demons of Hell’s Gate.” Unfortunately for her captors, just as she steps off the precipice into the volcano’s mouth, they realize she is not the naked and defenseless slave they believe her to be.

Gina looked down again and smiled. She said a few words under her breath. Out loud she said: “Haggan,” and took that final step forward.

She did not fall.

The guard’s footsteps rang out behind her as the man realized that something had gone wrong and rushed towards her to correct it. Not only was he much too late, but he was also running in the wrong direction. Any intelligent person living in a city as infested with magicians as Hell’s Gate would have taken one look at the floating woman and run the other way.

Sadly, dungeon-keepers were not selected for their intelligence. The man kept coming as Gina turned back the way she’d come. A contemptuous flick of her arm brought a tongue of fire from the depths. A gesture sent it towards the rushing defender, who could do nothing but look down at his chest in horror as a searing lance thicker than his arm penetrated his sternum and emerged from his back.

Bondoni packs a lot of back story into this short work, as well as some solid, if not altogether surprising, character development. It successfully walks the line between feeling like something ripped from a longer work and a standalone effort. It manages to feel like an important incident from the larger story of Gina’s life, yet still work as a completely discrete story; something that makes me, as a reader, very happy. 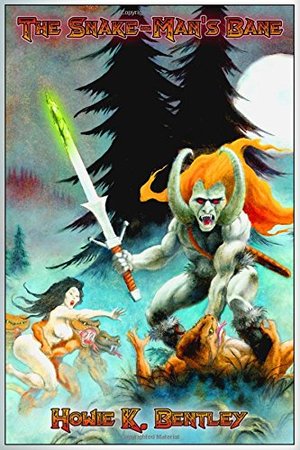 #77‘s second story has its moments, building up a taut little mystery with a brutal conclusion. SK Farrell‘s “A Little Blood, A Little Fire” is set in a city ruled by powerful, demon-pledged sorcerers. Citizens are being brought into the temples per a “municipal rota” to be bled for the city’s demonic patrons in hopes of breaking a terrible drought. As the surrounding desert threatens to reclaim the city, the prisons have been emptied and all their inhabitants sacrificed in a frenzy of blood-spilling. Surrounded by these horrible goings-on, a man witnesses the transformation of his daughter into something expected, but terrible. Farrell builds up the almost-choking atmosphere of the story step by step, as the narrator recounts the events of that one awful day.

Howie Bentley is someone I’ve reviewed favorably and unfavorably in the past. To read my previous reviews of four of the six stories contained in his new collection, The Snake-Man’s Bane, follow the links: “All Will Be Righted on Samhain,” “The Heart of the Betrayer,” “…Where There Is No Sanctuary,” and “Thannhausefeer’s Guest.”

To read them from first to last is to read a writer progressing and learning his craft. I dislike the first story, but like the three others. In each he’s taken more and more control of his often quite outré ideas. He has a definite taste for the blood and thunder of real swords and sorcery, and in his werewolf king, Argantyr, he’s nurturing a character with real potential. When his stories are on target, Bentley writes with some thunderous potency. You can almost smell the blood and lightning, and hear the echoes of Sleipnir, Tanngrisnir, and Tanngnjóstr rampaging across the sky.

The longest saga in this volume is the brand new title story, “The Snake-Man’s Bane.” There’s a surfeit of ideas on hand that ultimately prove part of the story’s downfall. There are so many things going on that they crowd each other, and the protagonist never gets fleshed out. For the entire finale he’s possessed, and essentially no longer a factor in what’s happening.

Vegtam is a Skald who runs afoul of first, an evil nobleman, and second, an ancient and vile wizard. Vegtam’s actions wind him up trapped in the madness-inducing world of the sorcerer Xexor-Wroth. The description of that place, reminiscent of one of Clark Ashton Smith’s more hallucinogenic passages, is one of the better parts of the story:

Vegtam seemed to be in an open orchard lying beneath a crimson sky. Two black orbs hung suspended high above, beaming down purple rays into the darkness. He couldn’t discern whether they were suns or moons.

He looked around, taking in the sights of an uncanny botanical nightmare. Sounds of suffering issued forth from all directions. One man — bound to the ground in a supine position — screamed in agony as crimson and black velvet-like tulips burst through his skin and rapidly grew bronze-colored suction cups on the ends. The sentient flowers attached themselves to the man’s wounds and drank greedily of the blood trickling from the holes they had made sprouting from the man’s flesh. 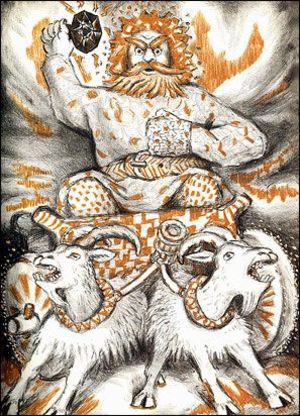 That’s good, solid S&S craziness, and there’s plenty more in “Bane” (including a giant translucent rat), but it’s all too jumbled. The unexplained mix of Scandinavian, alien, and other elements as well, may have a compelling reason for existing side by side as they do, but as it stands it’s a mishmash. For something like that to work, the reader should be able to sense that even when things aren’t explained, the writer has a firm understanding of what’s going on. That doesn’t feel like the case here.

My final complaint, one that all small presses suffer from, is weak editing. This needed much better copyediting than it seems to have received.

The last story in Bentley’s book, “Full Moon Revenant,” is another brand new one. It’s the next gory installment in the werewolf Argantyr’s ongoing story. While I found the opening sequence nastier than I prefer, there’s no denying its stomach-churning power. Despite being only a fraction of the length of “Bane,” this story breathes much more into its protagonist. Gory as they are, the Argantyr tales are ones I am looking forward to more of.

And that’s it folks. I have no more stories to review this month. All you have to do to read Swords and Sorcery Magazine is click THIS. To get Bentley’s collection, just follow THIS to get it in paperback or ultra-convenient e-book form. Next week I’m back with another installment in the Black Company reread: Bleak Seasons.

[…] example, when I saw the guidelines of the book that became Zombie Kong, I truly wondered just how many takes on the fifty-foot zombie gorilla could be possible.  In […]

[…] I posted last week that my story “Gina” had been published on Swords & Sorcery… well, the good news today is that it was also favorably reviewed on Black Gate. You can read the review here. […]